I draw the line at rapping 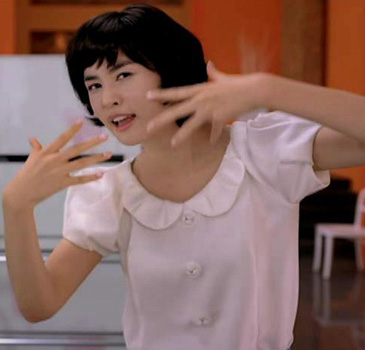 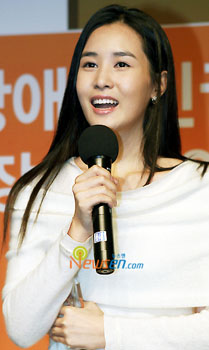 Left, new CF; right, as we know and love her.

One of Korea’s sweethearts and rising actress Lee Da Hae has a new CF for the kimchi refrigerator she’s promoted before. And — egads! — she raps.

Normally I wouldn’t even bother commenting on an ad campaign, but such is my dismay. Just the idea of Lee Da Hae rapping is enough to make me shudder in embarrassment (for her, not for self) because nobody — except maybe Song Hye Gyo, or Kim Tae Hee — seems more ill-suited to a rap than Lee Da Hae. And yes, I understand it’s not a real rap, that it’s a gimmick and meant to be jokey. But some jokes are better left not made, no? 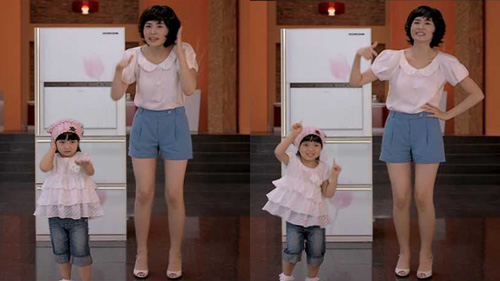 Plus, these stills from the CF show her — a young twenty-three! — looking like some weird time-traveled 1950s hausfrau misguidedly trying to be modern. It’s like telling June Cleaver to dress like Beyonce and this was the best she could do with nothing but peter pan collars and high-waisted pleated bottoms at her disposal.

I’m sure there are some who find it cute, but I find it awkward and frumpy. It’s too bad, because her previous CF for the same ad campaign (she sang in that one, and danced in another; this rap song rounds out the “series”) was cute and saucy. Remember that? 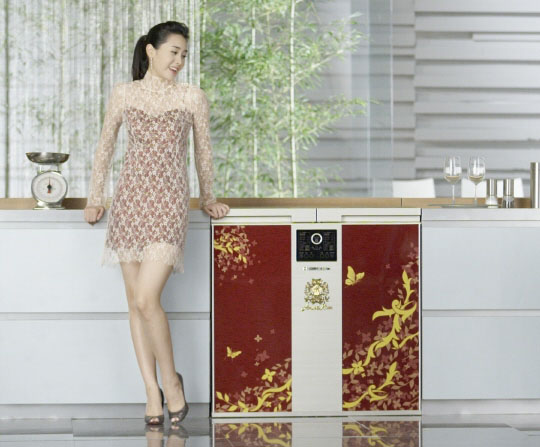 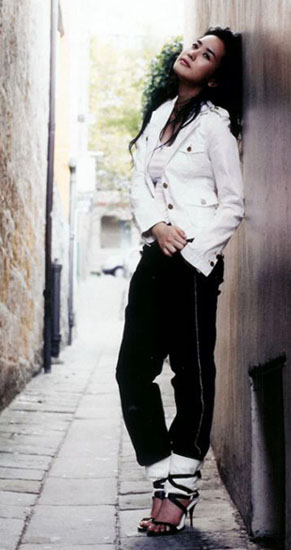 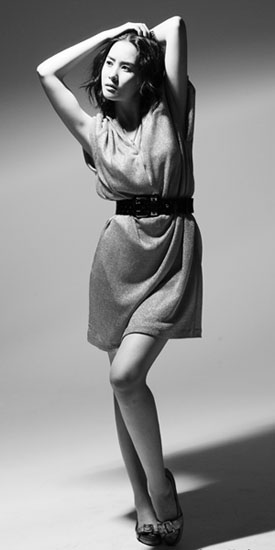 i agree too much creativity is sometimes no good xD

HAHAHAHAHHHA.. thanx a lot Sarah for dedicating a post (altho it's somewhat of a bad comment) to Da Hae, my favourite girl.
I would have cringed if SHK or KTH were asked to rap..but I just can't pass this with Lee Da Hae inside (it's jst me being a biased fan of LDH :P). I saw the clip with her rapping..(or was it the same one ?!), I thought it was rather adorable than weird... but yeah, it seemed kinda strange for such an elegant/sophistiacated to do that..

i think for me it's not just the fact that she is rapping....but also taking into account her hair, clothes, AND the rapping makes it unbearable hehe

HaHa C'mon don't take it too seriously. It's a joke, it's suppoed to be weird and funny to grab your attention. I mean, here is this beautiful and prim looking girl, seemingly harmless, about to sing for you in another one of those kimchi CFs. But BAM! She raps instead! Haha, I think it's hilarious and couldn't stop laughing when I saw it. Nothing to be embarrased about. Lee Da-hae's quirky like that and she's just one of those actresses who's not afraid to be silly once in awhile LOL

oh my. even though i haven't seen the CF, i'm absolutely appalled by that outfit. it looks like an attempt to be vintage that ended up emphasizing the worst of those decades. and the rapping.. since i haven't seen this, i don't really know how she pulled it off, but i don't think it really suits her.

woah, I thought she was a totally different woman in the first picture
She looks like an ajumma there.hahha

i love the fact that she can "make a fool out of herself" onscreen. the cf is supposed to be a funny attention-grabber, and brings out the jokey side of her.
but i'm glad you got to rant about it, cuz i cringed at first, and had a laugh about it =D
she's probably one of the best actresses out there today =D

I've just seen the clip. And Lee Da Hae's soooo adorable..haha..
Because the rapping part's only one part of the whole AD..and you have to see the whole CF to actually know why I can't resist this girl. She just makes me smile so much...
The clip's in Da Hae's thread in Soompi..if you guys are interested in checking it out XD

OMG. I won't say she looks CUTE exactly, but she's funny! *laugh* I love her clothes in the CF. I really like this girl. She's quirky, cute, and charismatic. But she does look sorta frumpy, doesn't she? But it's suppose to be a joke and provoke laughs while being memorable (and this is definitely memorable) so I see nothing wrong with it. *laugh*

She's usually a lot pretty, yeah, but it's nice to switch it up. ^^

Sometime one forget just how young she is, so if anyone to blame, if that the right word, it should be her manager.
I remember the so called queen of CV Jang Nara often uses rap singers in her music, but even she has never done so in one of her CV. I agree somethings should never be done. :-)

i just love da hae that i don't even care if she looks dorky in her new cf. :) thanks for featuring her. :)
ripgal thank you for pointing the way to soompi. i just saw the video. :)

she redeems herself though in her "I Love Rock and Roll" promo for the M Net Music Festival... totally transformed herself into a sexy rocker chick there :)

wow "hausfrau" Thanks for enriching my vocab~ haha
That's one word I won't forget because it shall be forever associated with Lee DaHae and this ad for kimchi. o.o;

hahaha! i totally agree! she looked like a trying-hard-retro hausfrau if you ask me..:)

I seriously had to wipe my eyes and view the pictures again. lol
You're right, Lee Da-hae doesn't suit that kind of image. She has this demure and just plain elegant image going on. lol

But hey--it was entertaining. lol

I love you Lee Da Hae.
You're cute even when you are rapping ^__^

lol i wanna see the commercial for the ad that would make my day...lol LDH rapping

Hi javabeans.... hahaha it's actually kinda weird and awkward to some degree but i just really find the kinky and funny side of da hae quite adorable... (probably a super biased opinion from a da hae super fan...) anyways... have you heard of her upcoming pair-up with Jang Hyuk... now there she will really be an ahjumma... care to humor us with some of your thoughts about her upcoming drama ("Robber")... id really love to hear what you think... Thanks!!!

LEE DA HAE IS CUTE IN EVERY WAY! Never mind the clothes and the rapping. She's just being versatile! I love her "always game" attitude...No pretentions, no inhibitions at all! A true blue thespian!

i keep thinking why people like her so much, i dont like da hae trully, shes anoying in my girl, and usual face, more like 'boring face'..lol and her acting also not so good, and her face like thirty years old woman, doesnt fit her in my girl (2 be anoying girl in that age?cmon..)..but just i think..sorry..

i like her in the pink dress....she soo preety:)