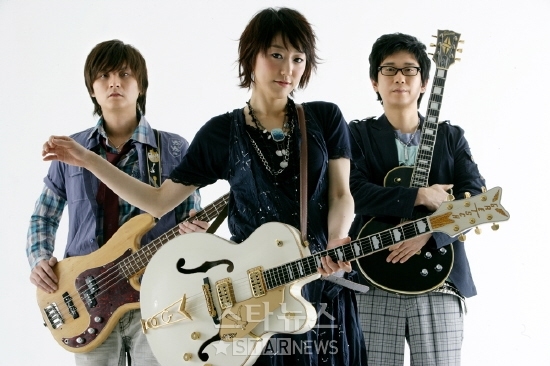 The remaining two band members will be looking for a new vocalist as Jisun embarks on a solo career. The decision was made after careful deliberation by all parties involved, including producers and their label Fluxus Music. 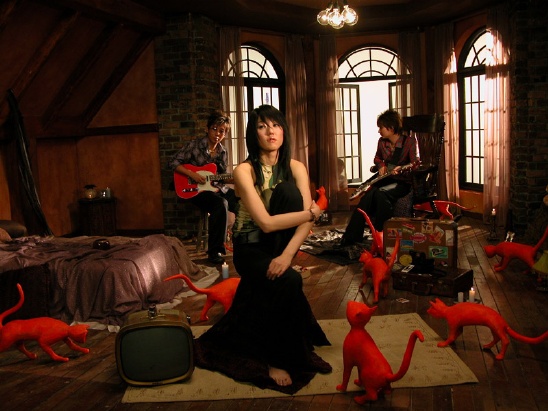 To send her off in style, Loveholic will be having a two-day concert on the 27th and 28th in Seoul to say goodbye and thanks to the singer they’ve had since her debut in 2003. 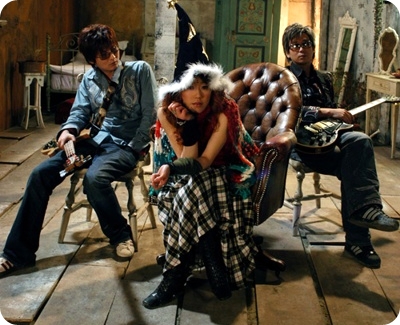 I suppose the news shouldn’t come as a surprise — the more I think about it, the more it seems it was inevitable, with Jisun doing a lot of activities working with artists outside of Loveholic. Although she’s arguably the most visible and recognizable member of the band, she isn’t (the whole of) the band, and she must’ve felt the pull to do her own thing. 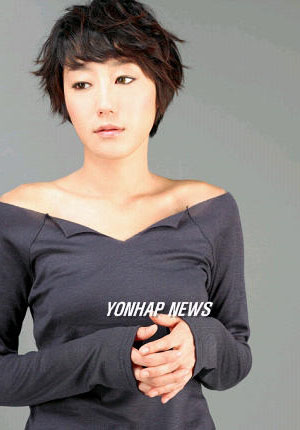 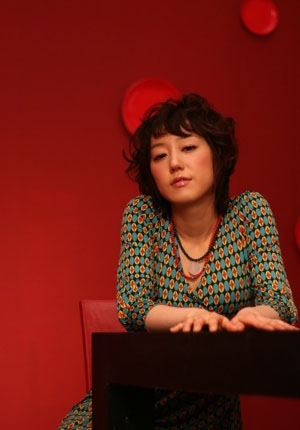 She’s collaborated with numerous other artists, such as Clazziquai, W, and Epik High. She and Clazziquai’s Alex released a digital single together, with the song “사랑해” (I love you), which is Part 2 to the song “너무 아픈 이말…” (these painful words); the two songs have a two-part music video too, whose concept was also used in a Shin Hye Sung video (but much better done with Alex & Jisun, I thought).
[ Download ]

I’d hate to see either side fade after the split, so let’s hope they both keep going strong. 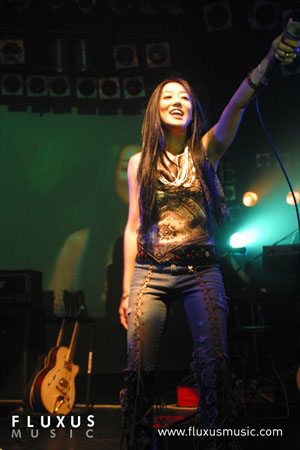 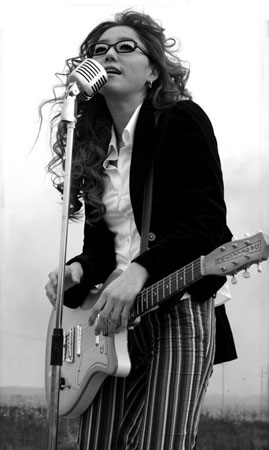 awww.. Loveholic is one of my favorite band.. I loveeeeeeeee Jisun and hope she will go far w/ her solo career.. Loveholic will not be the same w/o her.. but I hope they will find another great member.. hope both sides will grow.. who knows.. the best is yet to come.. eheh.. but I am abit sad though.. hope they will get together occasionally & collaborate together again in the future.. thank you sarahbeans for the news.. muah :)

WHAT? Noooo~ thankful that Jisun will still be singing, but I loved Loveholic as a whole :(

of all the times I see this lead singer, I never recognize her. She's quite the chameleon.

NO!! I love Jisun and Loveholic. This sucks ._.

Bummer! I luv this group. Good for her and bad for the Loveholic fans. Glad to see that she continues to grow as an artist. Wishing lots of luck to both parties. May they be successful apart as they were together. Cool B&W shot.

Oh no! Loveholic is amazing, and Jisun's voice is really amazing too...both so unique. I'll miss them together but I guess its time for them to take their seperate entities. I hope Jisun does great things with her solo career...she already has because her choice of collaborations have been wonderful....and I hope Loveholic continues going strong even without her, with a new voice. I'll be looking forward to hearing that new singer too. Loveholic's one of those bands where its not just about the lead singer, their music has a very distinctive..."loveholic?" kind of feel to it. So I really think they'll hold their own, as long as their fans keep loving their style and rhythms. Good luck to both, I'll definitely be in line for their new work!!

Dang, I really like this group. I hope that both sides do well. Love Jisun's voice and the love the music they made.

Im just praying that Clazziquai wont get any "solo career" ideas either.

this is sad news.. i love loveholic. loveholic and clazziquai are my faves. i love the alex and ji sun collab but its sad it had to come to this. awww.. i hope the best for both parties involved. i hope they are still on good terms also. like jo said, i hope clazziquai wont go the same route as much as i love alex.

BOOOOO
that means.... the new singer could change the sound of the band
well we'll see how it goes

its a sad news... but some things in this world change, maybe for the best...
~ i just wish Jisun and the rest of Loveholic good luck!~
I love Jisun, a really great Korean singer...
I always have her songs in my player, actually a lot and even memorize the lyrics so I can sing along to Jisun... :)

ahhh i'm having such mixed feelings. loveholic is my fav band and each member brings their own strengths to the group. yet they're also individually distinctive and unique so this solo thing isn't really sad news becos it sorta feels inevitable but in a good sense~ although i'm still sad that they're not going to be a band together. i hope the new vocalist does well as a loveholic member and def lookin forward to what these new developments will bring to the music scene

Noooo, I love Loveholic.
Jisun is a great singer so I guess it was to be seen that she would go solo.
Still I'm sad now >

it really does suck that she's leaving. I love loveholic and her voice is just part of loveholic. BTW the sonb Blue 923 is one of my altime favs from their album invisible things.

i love their music :p all all the music youchoose to put on your blog!

I first fell in love with Korean series, then movies and now I'm addicted to their songs. I'm just starting and Loveholic was the first band that really captured my attention, I first heard them in Spring Waltz "One Love" then "Bless You", "Hwanbu" and just my luck that distinctive voice will no longer be part of Loveholic. Anyway, if anyone out their knows a site where I could download their music it will be greatly appreciated.

When I saw the first picture, I thought it was going to be an article on Cherry Filter. :x
I don't know what's with the 2 guy 1 girl setup.
But anyway, I can't see how Loveholic will go on with the lead vocals. O.o

Aww....just read this...bad news for me...I just began to love Loveholic for less than 3 months...I thought they were perhaps the best band in Korea, I was desperately waiting for their new album, and now what!!! game over? Even though...there will be a new member, but still....it is without Jisun! I was secretly wishing someday I want to attend their concert or if they ever have concert in my residing country that will be fantastic! Yet...the news was so sudden that they don't even have a world tour concert yet!!!!!!!!.......so sad for international fans! so what if they had a 2 day concert in Oct 07...that's too rush for us! Urghh!!! (Complaints...XXXXXXX )

What I can be sure is...I will still support this beautiful voice.... as for Loveholic I do love their music...let's hope they find a great singer to join their team.

Can you explain what's going on in the mv? There's a girl in that huge shell and he falls in love with her? Haha I'm like dying to know what it means. :)

My gf loves Loveholic,
but I think only her Shinkirou, Me A Ri, and One Love is good,
compared to Mc the Max,
there is a long way to go...
The song and tone just need more catches.
No offence ya~

aw.. this is bad news.. although its good for her to go on solo...but still

ji sun is the best singer koreana and she are a good soloist, but without loveholic it is not the same thing, I believe that she should not abandon loveholic for that the music that you/they seize is good

i love you jisun

Ey! By any chance, does anyone have the lyrics and english translation of the "I Love You" song of Alex & Jisun? I really like it! I've been looking for the longest time but can't seem to find one. Thank you.

You are rubbish, you really do not understand music, what is your assessment of this qualification jisun

Hi! rocketfuel.You are rubbish, you really do not understand music, what is your assessment of this qualification jisun

#30, I think you misunderstand what rocketfuel said. "Chameleon" is not an insult.

Hi!teddy park,What kind of things you have, what is your assessment of the qualifications other people have chosen the road, you are nothing!

Hi! katsumy!.Do you love her or any other talent! Listen to your voice is not the love of her talent that type of person

Hi! javabeans.Can you please say that the details? I do not understand how! Also rocketfuel please understand that it is an insult to the Jisun.

It is not an insult to call someone a chameleon. It simply means they change their appearance a lot and is usually meant as a compliment.

#37, You are not understanding. Perhaps English is not your first language. There is no insult.