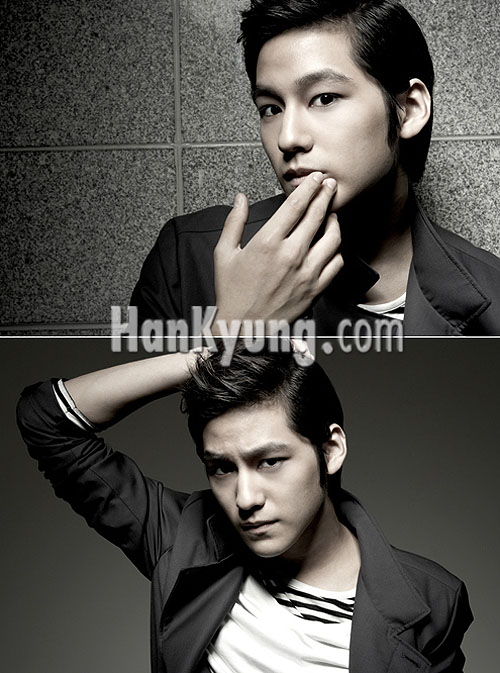 I like Kim Bum (not to be confused with Suju pop singer Kim Ki Bum). I think he’s adorable. I love the fact that they gave him an unabashedly homoerotic relationship storyline that was at once funny, innocuous, and not blown up into any big deal in the *family* sitcom Unstoppable High Kick. (Plus both boys were depicted as straight and had no qualms about their friendship lurve for each other.)

And I love that Hankyung.com describes Kim Bum in these new photos as striking his best “Jo In Sung pose.” Cause yeah, they totally ARE Jo-In-Sung-y.

For your reference: Mr. Jo In Sung 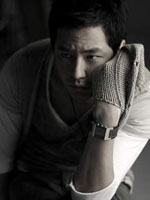 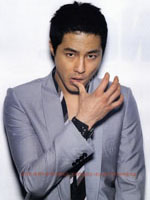 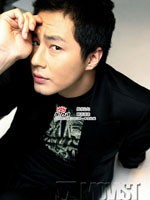 Kim Bum makes his film debut in the upcoming I Like It Hot, which recently sparked some online shenaniganery (it’s a word ’cause I say it is) because pics were released showing him kissing a Wonder Girl. Whoop. De. Doo. Online kerfuffles are pretty much par for the course when you’re a budding hot young thang in Korea, partnered with another budding hot young thang. All those flying hormones are bound to hurt somebody.

In the film, he’s coupled with Ahn Sohee (aforementioned Wonder Girl) as a young pretty boy who prefers spending time with games and motorcycles than his girl, but manages to pull off a cute kiss scene with her (spawning aforementioned shenaniganery).

The reaction to his new look? “Is that really Kim Bum? He’s so manly!” “He’s just like James Dean!” “Wow, he seemed so boyish before, but not now!”

i love him. even if he looks all grey and grown up (sniff) and intense up above (and i've noticed he has a lot of teeth). although i really supported the minho-kimbum story line. it was cute!

I can actually see some resemblance! This kid will grow up to be a very fine looking man! =)

HI dramabeans!!
I have a question not related to the article!
Could you put some information or your great summeries (like you always do) of the new KBS Drama "Bad/Mean Love" in which Kwang Sang Woo is staring!! I have seen the first 2 Episodes and it is really worth to watch it!! But I wished i could read your great and funny summeries too!!
thnx

"yeah, they totally ARE Jo-In-Sung-y."
Couldn't agree more! hahahaaha.. I love Jo In Sung..but this kid, Kim Bum ( he has such a baby face..) looks adorable too..
( Now I sound like pervert ajuhma! lol )

awww.... our little boy has grown up, and is now a man =P
Totally digs his comeback on SooHee fans haha (which was totally cute).
Kim Bum Hwaiting!

I'm a fan too! Looking forward to seeing him in the movie! :)

we hope that he would have a drama series....

it really confuse me between this kim bum and the kim bum of suju
pls can any body tell me their differncess??

ohh..i see..before this,i'm really confused bout their names.thanx for making clear...when talking bout kim ki bum,it reminds me about rainbow romance.Do u know where can i download or buy the DVD with eng subb..im really want to keep it.It was difficult to find the sitcom with eng subb.

actually kim bum is a real jo in sung fans hahahah.. so that's Why.. i like this kim bum..

wOw
i loVe You So muSh Kim Bum

kim bum u are soooo cute...

i'll be happy for your visit...

can somebody tell me what's the real relationship of KIM BUM and KIM KIBUM?

you see, they have the same last name and they reassemble each other.,

well, that's only my own point of view.,

anyweiz, guys, please do support both BOYS BEFORE FLOWERS and SUPER JUNIOR!!

have a nice day everyone!

I love kim bum and i like jo in sung

im so happy watching boyz over flower here in phils..

hope u can visit us here...

im sure u have a lots on fans here..

hi u are really cool.
in boys over flowers

——WAS IT EDITTED OR HE HAD BRACES?

its my husband u know!! whahahah

May this new day of your life will bring a lot of happiness and love.
Hope you'll have a wonderful time and may GOD BLESS U.

hi. kim bum ; i love u so much. u r my prince in my dream.
welcome to Myanmar.

hello!KIM BUM !
i love you so much .because .you very baby
welcome to VIET NAM

i love them all!

kim bum sarande.
i from iran