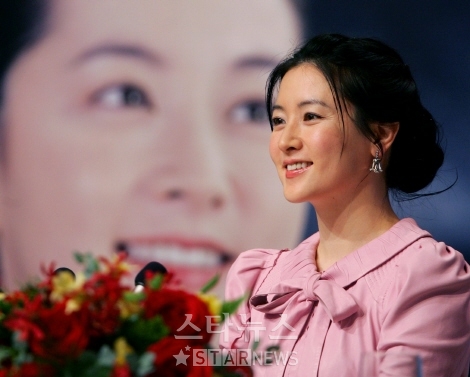 (Whenever I see distinguished actress Lee Young Ae, I think she looks so classy.)

She’s deciding on her drama comeback next year (she’s been away from television for four years, last seen in her mega-hit series Dae Jang Geum aka Jewel in the Palace), which’ll come sometime in the first half of 2008, and SBS is trying to woo her over to their upcoming series Daemul.

At a December 13 press conference revealing SBS’s broadcasting plans for the next year, an SBS rep explained their plans to adapt hit manhwa Daemul. The series is the work of artist Park In Kwon, who also created War of Money, the series that brought SBS a lot of success this year as a “national drama” (so classified because it pulled in over 30% viewership ratings). 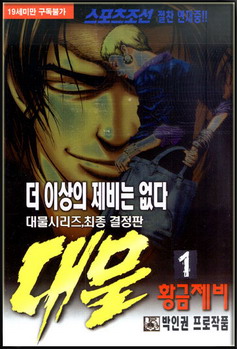 “Love is one part of a man’s life, but everything in a woman’s. … So if you could discard one part to gain the whole, wouldn’t you try?”

The manhwa bears an “adults only” restriction and centers on “the love and ambition that unfolds when a male escort seduces the female president.” Ooh la la.

(I learned a new word today! “Zeroth” or “0th” (in Korean, 0순위) refers to the place in front of “first” — which seems kind of redundant, doesn’t it? Acting as the antithesis of made-up words “umpteen” or “kazillion,” it essentially means top choice but is SO top-choice that the number 1 is insufficient to denote its super-duper-special-oneness. Which is ironic since only “one” means one. But apparently zero is more “one” than one? Anyway. Lee Young Ae is SO in the top choice position that she’s the “zeroth” choice. Languages are funny.)

“Braves” by 흰수염고래 (White-Bearded Whale) or Whale with a White Mustache, which has a nice ring to it. I freely admit the only reason I checked out this group was because of its name. I’m shallow like that. Heh. [ zShare download ]

I'm glad that Lee Young Ae may have an upcoming project as I really liked her in DJG and I think she is an actor capable of great depth.

great to hear something about Lee Young Ae after a long time...
i really liked her in DJG....i still watch it sometimes...
she's very pretty and talented...

the manhwa sounds interesting. i can see why Lee Young Ae is their super-duper-special zeroth choice. :D she's looks like she can be a president.

I would really like to see Lee Young Ae as Madam President. She has it in her to pull off a role like that. Just pray that she will accept this role. With her charisma and ability, I think she would made a great Madam President. It would be interesting to watch. Now I'm trying to find out where I can read the Manhwa in English translation. Javabean, do you have any idea where I can find one? Thanks.

ooo.. it sounds like a great story... LYA is soo beautiful... she has the dignity and grace to carry the role..

this is scary. I just finished watching her drama like two days ago. I'm still stuck in that period where i'm listening to the OST music. it scares me to find news about actors i just got done discovering on my own. woah.

I don't think zeroth is useful in math or engineering.

If anyone cares (I wish there was a shoutbox), you can catch the 22nd Golden Disk Awards on December 14th at 6pm (Korea time) live on the internet. It sounds like it's gonna be a fun show! Check your time zones. :)

glad that she's finally making a comeback in drama world. but, no offense, i think LYA needs to lose some weight (or get herself tidied up a little) before she comes back.
"male escort seduces the female president.” definitely sounds like a crunchy plot...

oh, interesting! and who is slated to play the male escort?

This seems like a drama I would watch, I love things like forbidden love stories (as long as it isn't incest *gas*)...but it seems like an intriguing story. I love/hate the quote you posted, only a man would say something so arrogant, but in some ways so true.

wow! is the escort also going to be younger than her?

Hey, am I the last to know? Are you saying you're a guy? Cool! Well I think you're great either way. it's just double the fun knowing how you give reviews on soap opera's usually enjoyed by homemakers (and yes majority of which are women).

Now, i'd like to say Lee Young Ae or whoever will be chosen, you've perked up my interest - the plot is quite interesting, Daemul is a must watch for me then. I admire Ms. Lee for her acting in DJG. In fact I cheked out her other series right after. I watched that old thing she did with BYJ and i thought she looked like shannon doherty in that series!

I think zeroth came about because of the "size 0" popularized by those jeans and dress makers in the fashion world. Where people get amazed hearing sexy skinny/anorexic/bulimic girls saying "i'm a size zero". Gosh!!!

altho this is not new i am glad to hear an update. thanks!
lee young-ae would be great in this drama i am sure.
it's been a long time and we miss her...hope she accepts...

The actor confirmed to play the starring role is Kwon Sang Woo.He's going to be the Casanova in this drama.The female actress is not confirmed yet though.Very anxious to know who will be casted for the role.

Miss LYA,donot make us wait too long.If you on hiding, we donot want millions of your of fans sooner or later will leave & forget you. For the sake of your country, MBC
Lee Byung Hoon & yourself, pleae donot hesitate & donot negotiate too long,j ust
work-out DJG-2 prject at once. May I suggest the sequel covering :
Starting with DJG - Ming Juong-ho - King Jung-jong love affair which are missing in DJG-1.until his death (the gentle Im- ho & also all the casts will certainly comeback
Following DJG with Ming-juong-ho & daughter live outside the Palace,during which
they will encounter & overcome new intriguing & treacherous adventures (remem-
ber former Right Minister,former Main Doctor, Geum Yeong & Yeol-ri are free out-
side!).
Return her career in the Palace. Her daughter is now growing up (played by the actress who supposed to replace LYA in DJG-2) where she will find her husband from thev noble family - DJG became more famous due to new medical & treat-
ment inventions - until happy ending. .

i don't think she's going to do another series for the meantime. is she retiring? i think DJG is unparalleled so there's pressure from her. IMO

Well, it looks like Mrs. Lee Young Ae didn't took the role in Daemul , but instead she took Mr. President as a husband, which i thing is the wisest decision !
However, if she still decide to continue acting or not, i consider she already made her point very clear !
She does it all, big time !!!
Gracious congratulations Mrs. Lee !

may she be seen on philippine tv again... gma-7 hopefully... our family, during "jewel in the place" was so united in viewing her show... we simply love and charmed by her!

Dang, that quote is hugely offensive.