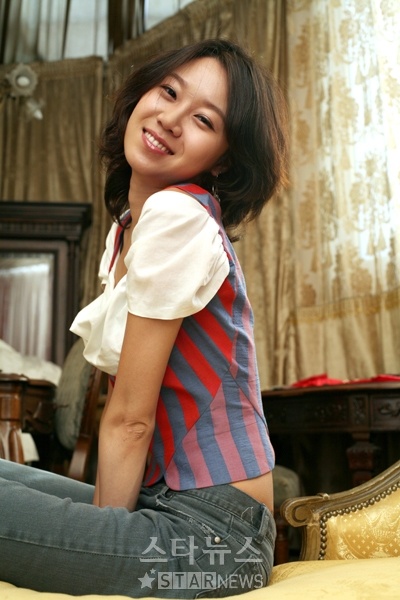 Stylistically forward director Park Chan Wook has made a name for himself both domestically and internationally with such films as Oldboy, Sympathy for Lady Vengeance, Cyborg Girl, and JSA (Joint Security Area). Gong Hyo Jin was most recently in the acclaimed 2007 drama Thank You and won a Korean Film Award for her supporting role in the film Happiness, and her resume is full of noteworthy roles, including but not limited to Ruler of Your Own World, Sangdoo Let’s Go To School, Taekwon Girl, and A Good Day to Have an Affair.

And now they join together in Park’s newest film as a producer (though not director): “an unconventional comedy film made by unconventional people,” Hongdangmu, or loosely, Scarlet Blush (Gong Hyo Jin’s character is an unpleasant sort whose face is always flushed red). Gong’s character tries to deter the attentions of a man who harbors a one-sided affection toward her (actor Lee Jong Hyuk of A Dirty Carnival, Green Rose, Crazy in Love), and enters into a wary alliance full of ulterior motives with his loner daughter in order to ward him off.

Billed as a provocative screwball comedy, the film began filming on the 6th and is based on a multi-award-winning short film, How Is It, Whatever It Is, by director Lee Kyung Mi in her debut directorial project.

The film is planned for release sometime in the first half of 2008.

So Park Chan Wook is shifting to make comedies? I've seen all the movies listed except "Cyborg Girl" (heard it's some kind of comedy too).

And I've watched many k-dramas with Gong Hyo Jin, too. I must confess that I don't like her that much, just because she's not pretty. But she's a good actor.

Sounds interesting. "Cyborg Girl" got some international film award, rite? But I heard the box office result back then in Korea wasn't that good. Really interested to know if this is going to be popular.

That's interesting. I've seen his Revenge trilogy and JSA, but I am curious to see what his take on a comedy would be.

I've loved all his movies so far, so I am sure that I'll enjoy this one too.

Love Gong and her spunk. She's a cutie and has the raw talent appeal Ryu Seung-beom has.

I adore Gong Hyo Jin, and it upsets me that people don't like her just because she's supposedly not pretty (which I think is not true). I don't want this to sound like I'm referring specifically to Paula who commented above. I just have noticed that there are a lot of people who think the same way.

I think Gong Hyo Jin has a lovely spirit and her sweetness and sincerity shines forth in everything she does. She may not have the "plastic" beauty that seems popular today, but then again, I'll take inner beauty and natural good looks over fake looks and vacuousness any day.

I just saw finished watching her in Thank You and she really held her own against the main actor's edgy sexiness.

I love this actress and am happy to cheer for her every success. Speaking as just one male, the kind of beauty that emanates from this actress is the kind that requires no panel of judges to justify. She makes you want to be by her side, to protect her from harm, and happy to be her friend, boyfriend, husband, brother, father, son... She achieves all of this without solicitation or pretense. The shy, inwardly glowing, delicate young lady who accepted those awards and praise with dignity and genuine grace is the same "Biscuit" and "Young-shin" that won the hearts of "Star Candy" and "Dr. Min." And she's the same one that's won the majority of our hearts.

May she remain as blessed in her own life as we are to have her in ours.

Oh, I feel sorry for what I've said about Gong Hyo Jin ...
Dun meant to offend anybody >__< Wish her every success with this new movie!!

Love Gong Hyo Jin! My favorite GHJ role is still Conduct Zero, the movie she did with Ryu Seung Beom when they were an item. (I'm really bummed that they are no longer together.) Awesome, awesome chemistry. A close second would be Ruler of Your Own World. I don't remember her in A Good Day For An Affair. Was it a cameo?

^Thundie, Lee Jong Hyuk used to act in musicals. :) I know this primarily because he was in the musical "Oh! Happy Day" with Oh Man Seok. (Heh.)

Sounds like a great movie! "Cyborg" was lots of fun, and Im Soo Jung was marvelous in it. I really respect Park Chan Wook and his unique directing style. I adored "Sympathy for Lady Vengeance". Also, Gong Hyo Jin and Lee Jong Hyuk in one movie?? I am suddenly very, very excited...

I'd have to say Gong Hyo Jin's coolest role was in "Ruler of Your Own World" where she pretty much played the best GF ever....until they made her character too draggy with the "5 episodes too long" drama.

She was also pretty hot in Volcano high.

I love Gong Hyo Jin. There's something chameleon-like about her unassuming beauty. In some angles, she's uninteresting. But in another, she's strikingly beautiful. Ruler of Your Own World was great. There's something about her that just shouts: indie film actress. She's natural on screen. So versatile, matured and poised.

Oh, yeah, Volcano High. I liked her in that and Ruler of Your Own World. I didn't like her characters in Thank You or Hello My Teacher (aside from the afro-wearing/disco-dancing).
How many times can you say, "World, go ahead and walk all over me."?
I don't remember her in A Good Day For An Affair, either, but Lee Jong Hyuk was really funny in that movie.

Hongdangmu sounds like it's going to be a fun movie.

Serious fan of Park Chan Wook's work here. I'm a Cyborg, But That's Ok (aka Cyborg girl) was awesome (Rain/Bi was too cute in it, who knew he could yodel so well?), as was the vengeance trilogy. All sorts of appetites whetted by this news. *Squeals with glee*

PS this physique not built for cart wheels, so jig will accompany squeals instead.

"scarlet blush"... @[email protected] the film's title itself is funny... i love comedies, especially off-beat, quirky ones... i have yet to see "i'm a cyborg, but that's ok"... i'll have to check out this director's other stuff as well...

She was in A Good Day To Have An Affair? Was it a cameo? I didn't recall seeing her in that movie. Lee Jong Hyuk was in that movie though, I remember.

I looooove GHJ. At long last she's getting the work (if not the mainstream attention) she deserves. She is of course a wonderful actress (always has been), but after her breakout role in Ruler of Your Own World, her career has had a couple of missteps. From 2006 onwards, though, she's gotten hella smarter and more fearless in picking projects. I think that's partly why she's getting noticed more NOW than at any other point in her career: she's finally fully embraced her unconventionality--and it's paid off. Her character in Family Ties is bitter, angry, and (initially) pretty unlikeable (and she's awesome in it, if I may add--watch it! watch it!); she deglams and plays against type in Thank You; her upcoming "chick flick" with Shin MinAh is by award-winning indie short film director Bu JiYoung; she doesn't care about going supporting if it means getting to work with acclaimed directors like Hur JinHo (Happiness) and Lee MyungSe (M -- who cares if it flopped? to me: Interesting Failure > Successful Mediocrity).

...and now she's the lead in PCW's next film. WOW. Whenever a new movie of his comes out, it's like an event for me lol. Huge, huge fan of his. What a tremendous opportunity, to work with one of Korea's best directors. I felt almost exactly this way when Im SooJung got casted for I'm a Cyborg, But That's OK--this weird, proud, goosebumby happy feeling that a favorite actress of mine is fulfilling her incredible potential. (also: agreed that Lee JongHyuk was the best thing in Green Rose.) Cannot WAIT to see what havoc their combined talent will wreak on the screwball comedy genre. ^_^

(btw, GHJ ISN'T in A Good Day to Have an Affair. Tsk tsk Newsen writer.)

Dahee, LJH and OMS together in a musical? *hyperventilates* You've got to give me MORE details, girl!

#17 mel, great to see you here.^ I knew this entry on GHJ would totally make your day, lol. And you agree with me about LJH in Green Rose. *high-fives* Wasn't he deliciously evil in GR? But sigh, he's so underrated. Is there even a thread for him in soompi? About Lee Myung Se's M flopping, I expected that and don't care one bit. His Duelist flopped too but it's my most favorite kmovie (Dahee loves it too). I can't wait to watch M.

love ghj. I have to agree i don't think she's pretty, but it annoys me that people would think that takes away from her skill... she's so amazing..
anyone see biscuit teacher? wait abotu 10 eps, and you'll like it...
ghj is so versatile it's amazing.

'I'm A Cyborg' is a quirky love comedy, we wonder how this latest would be like. In Park's hands, we're sure he'll help to bring the best potential out of his actor/actress. So we think Gong's performance should be great!