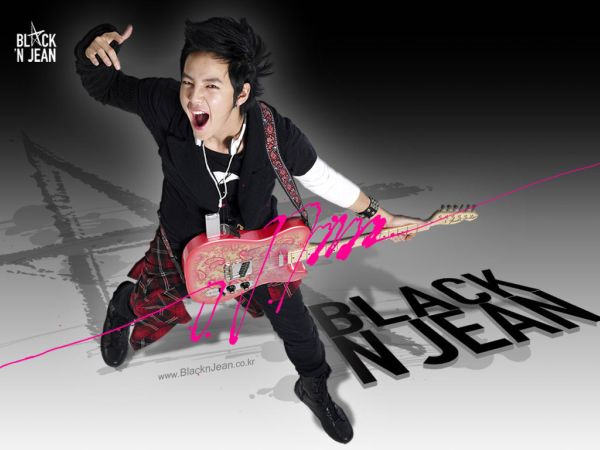 Seriously, if there’s one thing Korea knows how to do right, it’s branded entertainment. They did it with the Anycall series (Anyclub, Anymotion, Anyband), and many of their commercial ad campaigns and music videos are high-profile and large-scale, practically like mini-movies in and of themselves.

This time, the male cosmetics line Black ‘N Jean has tapped adorable rising star Jang Geun Seok, currently paining me as the unemotional Chang Whe in fusion sageuk drama Hong Gil Dong, as their brand model. And they’re sparing no expense for what basically amounts to a glorified hair-product commercial, bringing in kpop hitmaker Park Jin Young, aka JYP, to write the song that Mr. Jang sings himself. 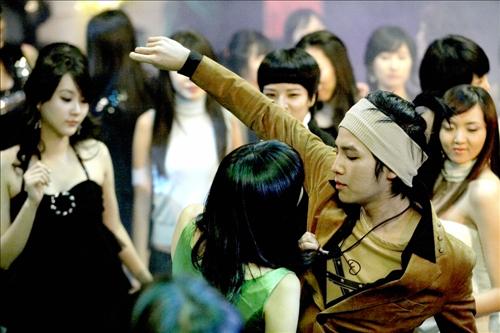 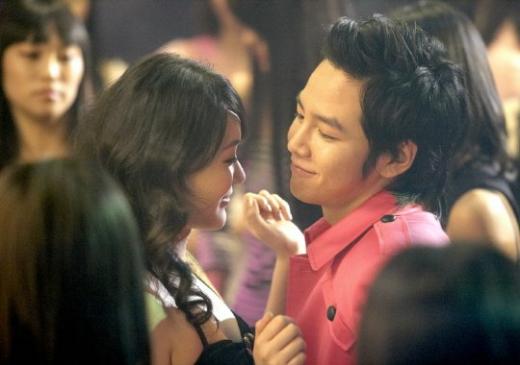 The song, “Black Engine,” is a play on the cosmetic line’s name, and is described as hip-hop electronica; it showcases Jang Geun Seok gettin’ his groove on while acting cool and sporting a variety of funky hairstyles.

The guy is totally adorable, I get it. And he’s obviously rocking the young hip urban thing, which is why it’s interesting that he’s made his name starring in historical dramas. Here’s the MV for the campaign, which officially launches the 28th:

Some angles kinda remind me of jo in sung.

You're right! Totally Jo In Sung-y. Reminds me a bit of Kim Bum here, too.

Haha, if he acted like this in Hong Gil Dong something tells me he could easily win over Enok's heart.

Oh branded entertainment, it's toxic but you can't resist it, especially when it's someone adorable at its helm.

After watching him in Hong Gil Dong and then this MV.

Ummm, this was beyond weird. I think i laughed more from his absolutely SHOCKING transformation from chang whe

Well it looks like the marketing team knows its stuff.. oh and the JYP guy - catchy song - I understood all of "let's go.."

for my personal taste and as Kang Ji Hwan's joke (http://www.youtube.com/watch?v=Kler8isDlOg) , Jang Geun Seok is scarily young, much too young. I love KJH's Gil Dong much much better : )

Totally a catchy song!! Its really interesting once you hear it more than once... Umm just wondering if they have the song to download... D= Probably not since its new?
Btw.. He's totally not the personality I would've seen in him LOL since I am watching HGD

i like the video and he is charming with all that smile/smirk. ^__^

he looks soo young though. how old is he?

For some reason, to me he just oozes with charisma.

WOAH....is this the same guy??? lol..
totally the complete opposite of his personality in HGD...he is freaking adorable here...maybe his personality will also change a bit in HGD with Enok's help (God i hope so!)...

anyways, the song is really catchy even though all i understood was "lets go baby" XD...it has a catchy beat

seriously, the contrast is quite shocking btw JGS here and in HGD. gee, if only he can improve sia. mabbe the role is not for him afterall... heh.

The beginning made me laugh...as if you need to shave, dear boy. LOL. Apart from that, it was pretty cool...If you hadn't told me that it was an advert for hair gel, I might have just thought, 'Oh, JGS is having a music career now too...' Haha.

@Jo: ditto that ! I was like "do you actually have anything to shave ?" your skin maybe smoother than mine. (Not that I have bad skin)

If this products was for girls, I think I would want it after watching this LOL. That makes no sense, but I think this was really catchy. He pretty much had a self-satisfied kind of smile on his face the whole time, but it was really cute somehow ehehehe.

"currently paining me as the unemotional Chang Whe"

The only thing that is bothering me is the fact that he looks too young and on top of that trying to act cool. He's 20 years old, right?? Why he looks like 15 or 16 to me?? Got to admit that he looks much older in HGD.

Sorry to butt in guys, I just had to add that I don't get how branded entertainment commercials work at all. It's like: see a cute guy dance around, buy a toe nail clipper. Why does it work?! It just does. And I agree, this kid totally reminds me of Jo In Sung in this MV/CF.

i had to come back and ask this question:

For this type of "branded entertainment," do they run it like a regular commercial on TV? usually commercials are around 30 seconds...do LONG advertisements like this just pop up during commercials? or do they play it in music video programs? how does that work? I'm really curious...I remember the one with Hyori, Eric and Sang Woo (sp?) and it was freaking long too...

i find it interesting that you are just watching your regular tv show and during commercial time THIS pops up...wouldn't it take up the whole commercial break? lol

i think it's a way to attract more attention. they probably show only short clips of the mv in the form of 15-20s commercials, and you can watch the entire mv online. it seems pretty smart to me, esp since korean youth culture is so entwined with the internet. everytime someone watches the mv, the company is getting more exposure. and plus, the internet is open 24/7 so the number of times it could be viewed could be endless. i mean, ppl are incredibly curious :P

Hey, I was just kidding about the hair gel. I thought this was a commercial for jeans or something. Does anyone know what he's selling?

ok i have to say that was a really cool vid.
lol reallly
jang is cool lol

catchy song...adorable "KID" ....now, if he could only infuse some of that charm into Chang Hwe, we'd all be a little (no, a lot) less pained while watching Hong Gil Dong.

I like how Korean commercials are mini-MV's, and MV's are mini-dramas. It makes you remember them because they're so interesting. American advertisers could take a few pointers on this.

Maybe they should make CH into a snarky bastard and see what kind of on-screen sparks fly. He seems to do much better with the smirking. Really quite a striking difference.

Also, I know he supposed to be doing the adorably hot thing here, but am I the only one who's disturbed by his hair-touching gestures? They're so weird!

korean ppls make the coolest commercials ever....
love it...^^

i think as an ad this was really good. i kinda wish the U.S did ads like this..though perhaps a little less cheesy. i don't this could survive as a music video on its own. so..incredibly...cheesy. i mean, the kid's cute, but his expressions and hair were awful. it seemed almost like a parody to me at times. oh well. liked the song.

Nice song! It's very catchy in this MV! Jang Geun Suk, I haven't lost hope on you yet! Yea, at certain parts like the stairs with headphones part really oozed Jo In Sung... But he was so cute shaving and that's a lot of hairstyles! Wish they'd show this in my country but all i have is "my name is rain", haha...

someone really needs to tell him to refer some of his cuteness into his acting in hong gil dong. Gosh! If he could look like that on the show, I would be so happy jumping and down screaming "OH MY GOD! HE'S SHOWING AN EXPRESSION!"

this video makes me laugh, in a good way, i thought it was more cute than charismatic. the song was kinda iffy but i liked it once i listened to it a couple of times. jang geun suk it too cute, except the slightly oily moves, he needs to do more smiley things!
btw, i think he looks better w/ bangs

Korean television doesn't air commercials in the middle of programming like Americans, so most of the ads are shown between programs. It kind of feeds into why CFs need bigger names and higher profiles to catch attention, since there's less airtime in general devoted to them. And also explains why branded entertainment has risen, with stuff like this available on the internet -- even an ad has to have entertainment value or star power to make an impact.

Awwww, he's such a cutie! I could hardly tell it was the stone faced guy from Hong Gil Dong.

JGS does remind me of JIS's little bro... i have mixed feelings bout branded entertainment... on the one hand it could be cool to have commercials that are mini-MVs and MVs that are mini-dramas... but what's gonna happen when one day we won't be able to tell the diff bw advertisement/commercialized entertainment & really good, quality music & film?

I don't see what the big deal is about branded entertainment. If commercials can be entertaining, I'm all for it. It's better than some random joe bouncing on the screen, screaming obnoxiously about some product's supposed wonder powers.

Nice. He is adorable but I always think of him as the little brother in Lover's in Prague :)

These things do not accommodate my short attention span; however, the reason why I did watch it for as long as I did was because of Jang Geun Suk.

But he's so young, I feel like such a lech!

hes totally cute! but I do agree he looks really young o.o

He does, but he's so cute in here.

It was very cheesy though. With his hair.....XD Some of them suit him better than the hair in HGD, but some are just a lil laughable....And the shaving sequence at the beginning. Other then that, I loved it. It didn't feel like a commercial to me....Which is why I watched the entire thing. It looks like the Koreans pour lots more money into commercials then Americans. American companies tend to pour money into the timeslot the commercial will be in. (I mean, superbowl is approaching, and it's like, $1 million for 30 secs.)

He's a cutie, but is it bad that I preferred him at the beginning of the vid without the scary hair wax?

As cute as I think he is, I find him a bit annoying in this music video. What is up with all the constipated facial expressions and transitional hand gestures? I actually think I prefer him as Chang Whe where he basically stood there and looked pretty.

erk rather than see him as charasmatic he seem more adorable and cute here. Seem a litlle bit too young and with all the gestures it seem not so right. It is somehow somehow something lacking in this mv. A soulful character maybe?

hello!!!! ever 1 his sooooooooo