Wedding bells on the horizon? 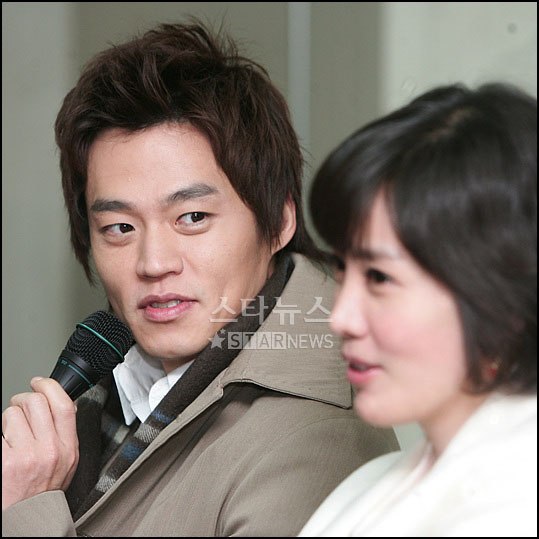 Hmm, wedding bells may be near at hand for the openly affectionate couple Lee Seo Jin and Kim Jung Eun.

Although they’ve been dating for a while (reportedly since they costarred in late 2006 as lovers in, duh, Lovers) and fans have wondered if and when the couple would officially get hitched, 35-year-old Lee Seo Jin now admits his desire to marry after he’s done filming his current series, MBC’s historical drama Yi San. The drama, which has planned for a sixty-episode run, will finish its broadcast run in March — but as the series is doing well, many speculate over whether an extension is likely.

A source close to the couple confirmed, “Lee Seo Jin admitted to Kim Jung Eun his wish to marry after Yi San finishes. I think it’s probable they’ll have the wedding sometime this year.”

With his drama being a hit and her recent movie (The Best Moment In Our Lives, also starring Moon Sori) expected to be a success, now’s as good as any time for the two to tie the knot. (For the trivia-minded, Kim Jung Eun was the recent bouquet-catcher at Sung Hyun Ah’s wedding last December.)

However, both actors remain busy with their careers, and as yet, “There are no official wedding plans.”

weeeeeekend starts for me. i'm taking friday off yo. :p

They are very compatiable...loved them in Lovers and got hooked on them...watched damo, phoenix, now lovers in paris! I wish them luck!

Awww...so sweet.
All the best to this couple..I love them!

they seem so perfect for each other.... both sophisticated.... i love his expression as he's looking at her @[email protected]

Awww... this is great news. I hope it does happen. They both deserve the happiness. Ive been rooting for them since Lovers. Love them. hehhehe Lee Seo Jin **melts**

I don't get it. Lee Seo Jin looks so hot in Damo and Yi San, but looks so gooberish in real life. Must be the costumes and make-up or is it the camera angles playing tricks?

I'm trilled for them!

I hope not to be the last one to comment... but well, am always late anyways. Ah, bout the couple to be knotted... I wish them both good life, fidelity and bliss. I am not too fond of them both but I consider them serious actors and hopefully they will persist to be active in the business. As I know, most of the actors who settle down - their carreers went sour. The big chunk of business still is in the stream of - who're-hot-and-available (single/unmarried) kind'a market.