You haven’t made it till you’ve got anti-fans 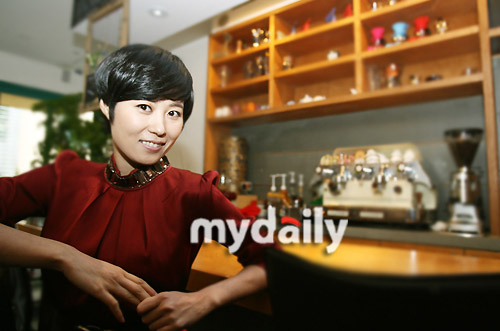 I’d like to sit down for coffee and girlchat with actress Moon Sori. Or knock back a pint of beer, since she seems cool like that.

Perhaps there’s a belief that you haven’t really made it as a celebrity till you have anti-fans. Hey, in Hollywoodland, you know you’ve made it when you’ve been satirized by either The Simpsons or Saturday Night Live. Which may explain why an actress so widely recognized for her talents looks at her newfound troops of anti-fans as a positive sign.

Moon Sori has gained anti-fans for the first time since her role in the drama Legend, and she explained her peculiar opinion by saying, “Rather, I’m happy that I was able to draw strong interest.”

Moon, who’s doing promotion for the new film The Best Moment in Our Lives (costarring Kim Jung Eun), said in an interview:

“All this time, I’ve had too few anti’s. I think that means the level of interest in me as an actor has been low. If anti’s are seen as being representative of interest in you, I think of them with thanks. After all, Kim Tae Hee, who’s far prettier than I am, also has anti’s, so what does that say?”

Moon, who’s appeared in numerous films to much critical acclaim, has been criticized for her role as Kiha in Legend — her first drama series — by people who feel she wasn’t suited to the role. (I tend to agree, although she was fantastic and intense as the ancient fire priestess Kajin.)

Her role may have gained her newfound anti’s, but it also increased her fanbase overall:

“Through my role in this drama, I gained middle-aged female [ajumoni] fans as well. In the past, people who didn’t watch many films had no idea who I was. Now I’ve gained more fans, and new anti’s have stirred things up. I think of criticism as something to be thankful for.”

first of all, dramabeans is like the first site that i visit everyday now ever since i discovered it!! thanks javabeans. well, she's cool alright, taking a positive perspective on a bad thing. i think she's the first person who i actually know that i says that she welcomes anti-fans. now we all kno her since she made on the front page of dramabeans. (i didn't watch ledgend).

i don't know who she is, but i sure like her outlook on this whole anti phenomenon ( those people....what in hell is the world coming to?..)... wish her movie the best

it's better than being depressed right? *shrugs*

Yeah, I'd have a drink with her. I guess that's the difference between being a greenhorn in the industry and being a veteran. She has a positive and -- dare I say -- ironic spin on the whole business of antis. Very amusing.

I didn't care for her as Kiha, but you can still respect her as a strong actress. Kudos.

i love her for her acting talent as well as her unconventional beauty. she's been really brave with her previous role choices, taking jobs that most actresses would never do. and look at that b.a. stance she's taken about her antifans.

I didn't like her as Kiha in Legend, but I wouldn't go so far as to call myself an anti-fan... it's cool that she has such a positive outlook on it though. ^_^

man... it must be nice to be so famous that you're even able to welcome criticism as a sign of success... i imagine anti-fans to be crazed, sociopathic types... i didn't object to her too much in the role of kiha.. then again i haven't finished watching the entirety of legend.. so i might have a different opinion once i've actually seen the whole thing.. but she comes across as a strong actress regardless..

My mom felt the same way about Moon Soori being too old to play this part.) Even when I told her Bae's older than her, she wouldn't believe it. :D But she also felt that her performance was the strongest (i.e. the most "actorly") among the main four. You wouldn't want Cate Blanchett to play Hannah Montana, but then she'd probably play a better Hannah Montana than Hannah Montana.

Most Korean celebrities are sanguine about having antis, because it means that A) they've reached a certain threshhold of commercial visibility and B) their audience isn't neutral about their work.

To have antis isn't just to have crazy fans who may poison your drink or mace you in broad daylight. It means that you've reached a critical mass of anti-fans where they've formed Naver home sites dedicated to hating you and spreading, through viral campaigns, vicious before/after rumours and bombaring your home Naver site with murder threats and the like. It isn't merely dangerous (and dangerously pathetic) vitriol; it's the [I]organizational[/I] energy needed to make an anti-club work, which itself is a reflection of how advanced Netizen culture is in Korea (and to a degree, Asia as a whole.)

And, yeah, if you have antis who troll on an English website (*cough*Popseoul), dude you've REALLY made it! :D

And in this case, I think I'd rather be considered "un-made" than have anti's trolling my site. It's no good for the daily stress levels or, at the least, the eyeball strain derived from eye-rolling.

Cate Blanchett - LOL! *still bitter about her losing the Oscar to Gwyneth*

I agree. I rather be "un-made" any day over dealing with immature (among other things) antis.

oh i liked her already (you have to see Oasis, Great Lawyer's Wife - she's the shiznit). this made me love her more! her new handball movie looks promising too.

I didn't watch Legend but I'm impressed that an actress can take any 'interest' in her on the chin and appreciate it for what it is. That is one hell of a positive attitude that we could learn from...

p.s. Did you hear about Joe Odagiri's engagement? Shock.

Man, she's amazing. I never finished Legend (still working on that, lol) but I can definitely respect Moon Sori. (Man, it must have been fun playing such a bipolar character)

I think it's wonderful how she has such an outlook about anti-fans. But at the same time, that's extremely sad. She should be doing this for herself, not to gain recognition from others. It leaves a bad taste in my mouth, her saying that.

Moon Sori looks different in the pic...i think it's the hairstyle...anyways, i wasnt fond of her in Legend but she delivered a solid performance as KiHa in that drama...i like her positive outlook on the anti-fans.

i finished LEGEND and i think is do not agree with MSR's antis, because i liked her performance in LEGEND. she brought life to the character Ki Ha. no one can perform that role but she. all the casts of LEGEND did well, but the villains gave commendable performances, Moon So Ri, Yoon Tae Young and Choi Min Soo.

i like moon so-ri a lot in the legend... she's really good... i like her alot as giha.. can't ignore her presence and her expressions enough to know what she feels... hope she would have more series to come... yeah,,,, i like to see her more in a light comedy romantic series...

I also like her performance in The Legend. She did great act. it's impressive to me.

Yeah, I loved her performance as Kiha!! Her facial expressions, tone of voice, you could tell by every action how the character was feeling. Kiha must've been a hard role to play - clever, shy, lovable, innocent, misunderstood, strong, and evil, all at the same time!! Wow!! I thought she was perfect! Well done!