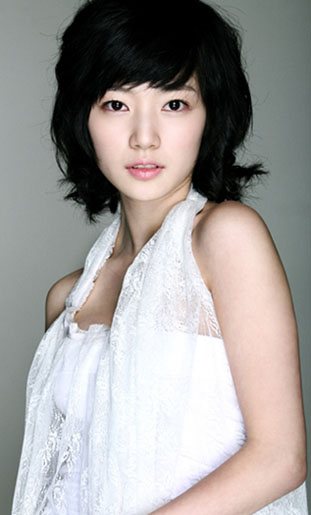 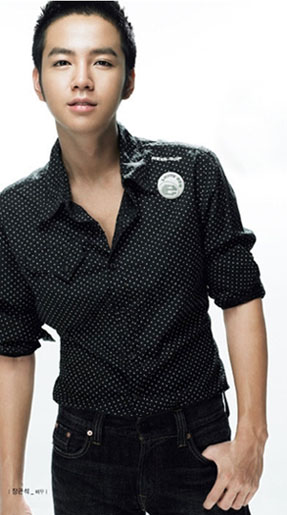 Doll-faced actress Kim Byul (of the uncommonly good sports drama Taereung National Village, and Clazziquai’s “Sweety” music video opposite Lee Junki) has been cast opposite Jang Geun Seok (of the current fusion sageuk Hong Gil Dong — but if you spend any time on this site you already know that, lol) in a new movie, Baby and I. She was also in the teen sex farce Dasepo Naughty Girls, which I actually thought was quite interesting on several levels (although as a film narrative I think it ultimately falls short).

In Baby and Me, the 18-year-old character played by Jang Geun Seok has his life turned upside-down by sudden fatherhood. Kim Byul plays a quirky girl who, coincidentally, shares her name with her character in the film, which initially was a source of surprise for both actor and producers — she’d received the script to audition for the part and was startled at seeing the name. A source from the production team explains: “It isn’t only the name that’s similar, but in every aspect she’s like the film character, as though she’d come straight out of the movie.”

The film is set to start filming at the end of March.

Haha yea, except Michael Cera didnt really have a big role in Juno, not as much as Jang Geun Seok will i expect.
And when i first saw the pictures i thought "why does Jang Geun Seok's head look so small?" but i dunno, maybe the buzz cut just doesnt work for him. (How old is that pic anyway?)
Kim Byul also looks strangely pale lol.

huh, like juno has any right to accuse anyone else of copying. esp a korean movie.

Ah, Kim Byul! I absolutely adored her in Taereung National Village; she was so awesome. My only regret about TNV (it's perfect in everything else) is that Kim Byul did not have as many scenes as Choi Jung Yoon. Although I watched TNV for Lee Minki, by the end of the drama, I loved (and missed) Kim Byul's character the most. The music video that she did with Minki last year (the name of the MV escapes me now) was really good too. There's a very natural air about her acting.

I don't mind Jang Geun Seok, perhaps because I've only seen the first three episodes of HGD and don't have enough reasons to want to kill him (unlike sarah, LOL).

this reminds me of Jenny Juno (the korean movie)...and, ok, also Juno (the american one)..
they make a cute couple though. it should be interesting to see him as a teenage dad XD

Jenny Juno leads to Juno (American) leads to Baby and Me.
Can we please stop the whole teenage baby incident angst?
There's only a limited number of storylines that can come out of that.

"Byul, Jang Geun Seok — and baby makes three"
OMG! When I first read the title, all sorts of LOUD, CRAZY thoughts entered my head.....and then I read the rest of the post. Whew! Stop scaring me like that, Sarah! I'm running on little enough sleep as it is! :D

JGS's character in HGD is getting interesting, btw.
Patiently waiting for Ep.15 recap.... ;)

Not familiar with neither, but its interesting enough. I'll be looking forward to it...

Guys....for the record, American Juno DIDN'T rip-off the Korean movie (also named Juno, I believe.) As Juno is the Goddess of Fertility, so I find it possible that it's just a coincidence both happens to go around pregnant women. I've watched the movies, and I don't think they're that similar. Sure, pregnant teens. ANY other similarities? Now, if it was a COMPLETE rip-off, then I'd say so. But to me, it didn't seem like it.

I guess this is the time when movies about pregnant teens are hitting in....*sighs* Another fad, only I don't like this one.

Wonder if Jang Geun Seok can pull it off...

haa, i read the title and i though he got her pregnant in real life... scared me!

anyone knows when this drama will be coming out?? june, perhaps? (yn)

I've already watch it..
It's cute, funny and touching.
JGS was cool, and Kim Byul was very cute.

i love jang geun suk you are my love

what's with his lips.. are they for real.

they are so yumming... ahhhh if he was a bit older only chokum....
i saw the film it was sweet and endearing.. i loved the baby and how the director was lucky in the emotion portrays..most of the scenes the baby and JGS are in the same mood or simulating one another. as if he (the baby) did understood him and behaved as a grown up.. nice feel-good film.. loved it...

i really liked the movie
JGS is so cute and the baby, and i really liked kim byeol here
I just don't know why he looks so tan in some pics and so white in others, he looks better with longer hair

Oh my God! Jang Geun Seok is very very handsome,i like him! And i like Woo Rahm in Baby and Me,he is cute. Success for your carreer

...cAn i have Kim Bum's email address...I like him so much!!..I'm madly in love with him..please grant my wish..i really wanted it very badly..

...I'm girl but sad to say, i fallen in love with Koo Hye Sun's beauty..please tell her that i also wanted her email address..i'll wait for your response..thanks!!

Please tell this to Lee Min Ho:
You're very handsome..I like you to!..So please give me your email address..Please!

I hope he will have the same hair style in other tv series /movies as the same as in this movie.

be a good person like your figure in ur movies... keep movin' jang geun seok...
be grateful whatever u have now.. and be patient 4 around... GBU alwayz...