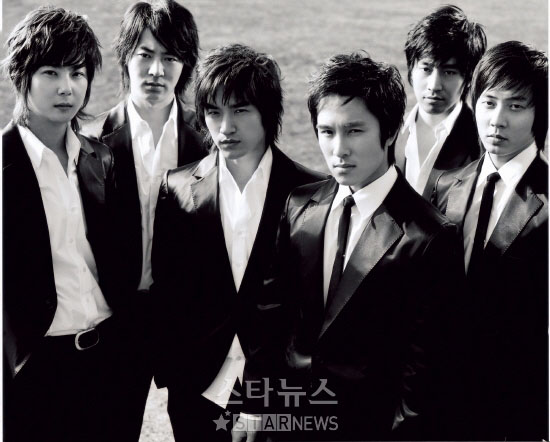 Pop group Shinhwa has had an amazingly successful career — eight full-length albums (a ninth on the way), four compilation albums and one best-of, one Japanese album, numerous CFs, a large and devoted fanbase, and successful spinoff projects for its members.

Each member has a busy career on his own, whether in acting, music, or producing: 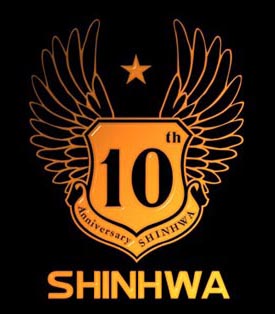 Shin Hye Sung has two solo albums, in addition to a project group with singer friends Kangta and Lee Ji Hoon, Group S; Lee Minwoo has three solo albums and has branched out into songwriting and producing, as well as acting; Jun Jin acts and released a single; Andy just released his first solo album; Kim Dong Wan released a solo album last year and has a burgeoning acting career; and Eric, perhaps the most successful on his own, has released no solo music work but gets the most CF engagements and acting jobs, having starred in five television dramas (if you count Wolf, which was canceled after an on-set accident), the most recent of which was last year’s excellent Que Sera Sera.

So it’s pretty remarkable that throughout all that, the group remains strong, even if they’re taking more time to engage in individual pursuits.

In anticipation of the group’s upcoming tenth anniversary (March 24), Shinhwa will be opening ticket sales on February 18 for their 10th Anniversary Live In Seoul concert to be held on March 29 and 30. It marks their first concert in Korea in two years; they’ve opened up a new website, www.Shinhwa10th.com, commemorating the event. And, their ninth full-length album meets its release next month.

I didn't really learn about Shinhwa until pretty recently (approx 2 yrs ago) and their list of accomplishments is pretty amazing. But what I like best about the group is that they remain down to earth and are not afraid to make a fool out of themselves on variety shows. They are truly multi talented entertainers.

I really wish that I could be there for their last concert, but due to certain circumstances (lack of money) I can not go. I am amazed at how hard they work, how close they are, and how far they've come. I've watched some of their concerts on dvd and they really put on a great show. They are great at performing live, something I cannot say about other groups. I wish them all the best.

I've tried to be open to other kpop artists and I wonder will any of them be as successful in 10 years. I see more of an emphasis on youthfulness and looks than talent these days. I listen to other groups (I wont say names for fear of death threats lol) and I wonder how are they selling records?! Have you heard the recent supposedly sung in english solo single of a certain idol group member?! I was embarrassed for him but yet, it is on the top of the Oricon charts. I hope that fans will start holding their idols to higher standards, otherwise kpop will only get worse. Good thing Shinhwa has talent in other areas.

Thanks so much Sarah for this well-written article. Words are not enough to express my excitement over their upcoming 9th jib AND 10th anniversary concert. Gaaaah, I don't want them to leave for the army yet. But such is the life of adult males in Korea. I too learned about them only several months ago (which I'm highly regretting right now) and I think they're truly amazing -- talent-wise, looks-wise and personality-wise. I just cant help but smile, laugh, cry and be goofy whenever I see these 6 men.

Like Malou, I'm so happy you wrote about them too. I got into Eric and Shinhwa mostly because of your awesome QSS reviews and all around Shinhwa articles. If you didn't write about QSS, I would've never researched about Eric, downloaded Dongwan's My Love here, watched Minwoo's NN5, and came out totally in love with all Shinhwa. I pretty much owe you, haha.

god i so want to go bad. the tickets for overseas are hella pricey. im still not sure how and tickets are selling fast so yeah. im still wishing on a prayer. i really like shinhwa, out of the many pop groups coming out lately they still remain strong in my book. i love their friendship and solidity as a group. plus uber talented people who still care about one another as a whole. i do hope they keep going strong after the whole military thing. im sure they will.

Wow...now I feel how long I've been into the korean music scenes. Man, would I like to be in the audience for that 10th year celebration. It'll be incredible, and monumental. Shinhwa is to be respected for their bond, their camaraderie, their hard work, and how devoted they are to their fans...and the fact that they remain humble and keep trying their best despite everything that they've already achieved. Each of them has his own talent, and each is dignified, handsome, and dedicated, and thats awesome.
Congratulations to them for making it work for 10 years.
:)

http://www.youtube.com/watch?v=f249Bpv4UP8
Nice video for the concert...it is interesting how a generation of fans have aged with them, together, and how they still have fans from all age groups.

I enjoy watching Shinhwa!
It is amazing reading their accomplishments. 10 years is definitely not a short time. Amazing for a boyband to last this long and be as successful throughout the years. They can stand together as Shinhwa or stand alone in their solo careers....and be successful either way. =) Did I say that is amazing ? LOL.

^right on, orangehaji. They're nearing 30 but they're only getting more and more handsome *swoons*

WOW. Congrats to Shinhwa.. Can't wait for their new album.. Anticipating it!

They're a lot like SMAP.. I think they hit 10 years or around there.. I don't know if anyone noticed. :D

I first got into Shinhwa around their fourth album, and I've been a fan ever since. The brotherly bond and goofiness of the group is, in my opinion, something unique and exclusive to Shinhwa. That has got to be one of the main reasons I'm still a devoted fan. I see younger boy bands and pop groups, but I can't seem to love them the same way I first started loving Shinhwa. Shinhwa is just so... Shinhwa (they're like their own adjective!), I don't think there will ever be another group like them. I'm so excited for their tenth anniversary, but it really makes me sad that they will have to go to the army soon. Thanks for the wonderful blog entry. Go Shinhwa!

In Chinese, the name Shinhwa means legend and they had definitely had been a legend. No one can replace them. ^^

I am glad that they are at least going to the army together. ^^
I will miss them but I surely don't doubt that they won't return.

Much love for Shinhwa. It's been wonderful watching them blossom from cute boys into the handsome men they are now. Congratulations Shinhwa!

I have yet to hear one song they've sung. I guess I'll do some web searching

I can't imangine what the next 2 yrs. will be like without Shinhwa. I'm going to miss them terribly.
I'm so proud of them for all their achievements, but especially for being able to stick together dispite their busy schedule w/ their individual projects.
신화 파이팅! 사랑해요!

yeah..me too really going to miss them..
they have worked so hard (esp the bleeding nose witty guy dong wan) all these years..
because we know, their roads were not always easy...
for them to stay in a group (successfully), i really appreciate it..

I'm going to miss shinhwa when they're away in the army, but it was nice to see them together in a few large award show end of last year. Korean variety just isn't the same without them. I think they made shows like x-man and love letter into huge hits with no-korean fans.

I wish I'm in korea - I will do anything, ANYTHING, to go to their concert.

The 10th anniversary is already tomorrow...time flies by so fast...

I can't believe Dongwan and Eric are going to the army soon...

Forever Shinhwa. They will be back.

wish them happy 10th anniversary ..
even it's 4 days late..
but still wanted to wish for their anniversary..
hope their friendship still last forever..
quite sad coz i cud not go to thier 'last' coz b4 sum of the members go to NS...
however, i'll forever love n support them...
shinhwa changjo~

i love shinhwa~!
all of them^-^
hope they will always be together...
aja aja fighting~!!

jus found this article after 4 years....hehe... SHINHWA is back with a back... all d old fans must b so happy