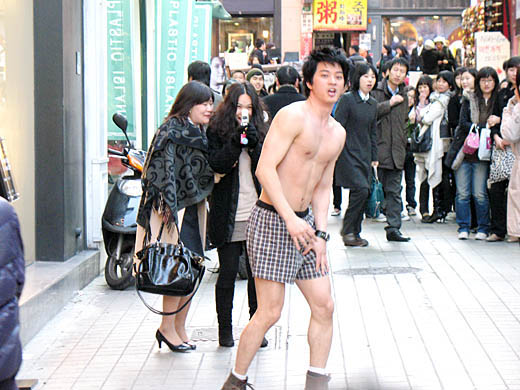 And no, that’s not a metaphor.

Actor Kim Ji Hoon actually had to streak through Seoul’s busy Myungdong district for his new show, Why Did You Come To Our House? (which premiered yesterday, the 28th). On press conference day for the new SBS Friday drama, Kim Ji Hoon described that scene as being the hardest to film — not only because of the personal embarrassment of running through a crowded street in only his boxers, but because of the cold weather. That, and: 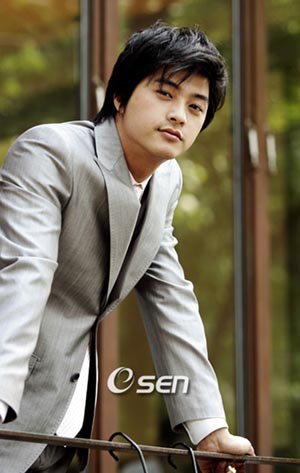 “Myungdong was unusually crowded the day we filmed that scene. Because the scene needed to be shot from afar, the camera and staff were removed on a rooftop while I ran through Myungdong in my underwear, and we shot it four times.”

Kim Ji Hoon last acted in the popular KBS weekend drama Golden Age for Daughters in Law with Lee Soo Kyung, but it was his role as the scruffier Mr. Sexy (Hot Bedroom Eyes) Eun Tak in last year’s Flowers For My Life that caught my eye. (By the way, great drama. I don’t know that I’ve ever seen drama where there are absolutely no bad guys, much less one that’s so satisfying, complexly drawn — and morbidly funny.)

In Why Did You Come To Our House, Kim Ji Hoon plays a son-in-law who goes to live in the home of his wife’s rich family. The drama also stars Kim Jung Nan, Lee So Yeon, Kim Seung Soo, Oh Yoon Ah, and Jung Joon Ha. 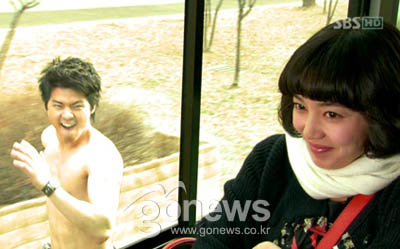 Tags: Kim Ji-hoon, Why Did You Come To Our House

I pity the guy. What people do for their art....

Looks funny. I'll be checking this drama out if I (and not my teachers) have anything to say about it.

Though there's like, 10 dradmas, (Flowers for my life included) I promised the same thing to...

I noticed her too....peeeeeerv :P

how embarrassing :( poor kim ji hoon.. i liked him a lot in flowers for my life.. he's definitely a hottie.. it's so funny how the lady is totally leering at him.. i wish i could have been there.. i used to go to myungdong every weekend when i lived in korea..

This made me chuckle. I hope I can see this drama online at some point. I loved Flowers For My Life and KJH...as well as CTH ...well actually I thought all the actors and actresses were quite good. Great drama. When will it be released on DVD with English subtitles? Can't wait!

Daughters-in-Law is still airing here. I started watching and then stopped and then started again. It's funny, but just an ok series.

how embarrasing... and the camera crew was far away. must have looked like he just decided to go running in his underwear

Aww, how sad, it must've been so embrassing, man,

I want someone to sub this show so bad , my shotty Korean is only letting me just get through them ( At least someone is going to do Single Papa in Love ). Seems like alot of good shows are skipped over.

Btw , I wanted to apologize for the huge time gap in my music blog , I had some life issues arise and it keeps me away from the net. Hopefully more interesting reading soon.

kim ji hoon is such a hottie he he he....actually i just watch flowers for my life and i noticed that he is such a good looking man. and i also believe he is a good actor. i'm so happy he has a new show...

may ia have the theme song of wanted son in law?where i could download it

i love kim ji hoon sooooooooooooo much iam from kurdistan(iraq)

I'm currently watching this drama & I love Kim Ji Hoon's acting in here. I got the urge to see his other projects after liking him in Stars Falling From the Sky! He's just splendid & super gorgeous! I must say he looked good in those boxers! LOL! Poor guy had to brace the cold weather! He's a true professional! I really like him & not only his good looks but great acting, I liked that scene where he & his brother were about to commit suicide & in that scene he was crying & cldn't help but cry with him! He was very convincing in his role & he was also very funny!