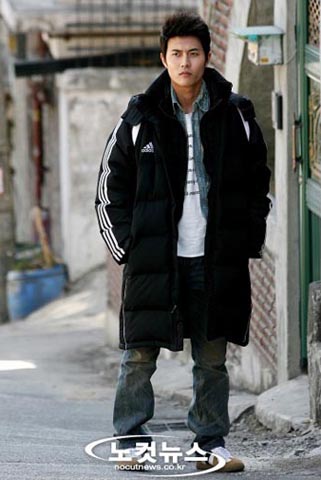 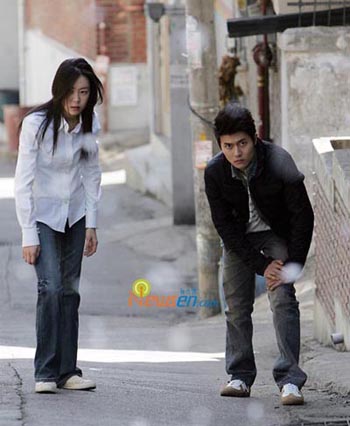 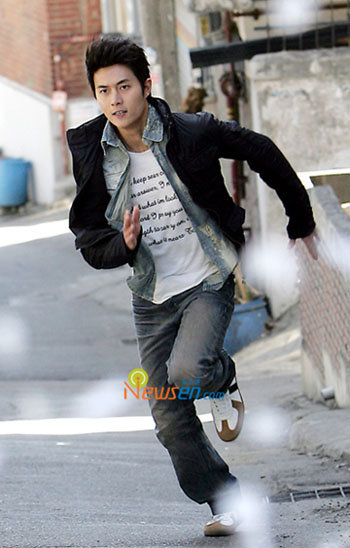 well, you know. he is known for his running. haha. referring to delightful girl choon-hyang and "getting there in 10 minutes".

This has got to be your shortest post beans! XD
For the love of Jae Hee huh? :P

he's so smexy! look at him run with that determined "IMA CATCH YOU!" face! so cute!
sorrry, at times like these i become an uncontrollable fan girl...

I want to check him out in his new series with Eugene, but the story line is kinda weird. I mean, which husband would allow his wife to sleep with his 3 best friends. Don't they know about in vitro fertilization in Korea?

all4movies, I don't think that's the story line of "3 Dads, 1 Mom." Eugene is newly widowed and the three friends are described as sperm donors. I doubt three-way sex is the way it goes down... heh. Now that would really be a different kind of kdrama.

(I THINK -- and info is kinda scarce right now -- that the three friends were sperm donors while the couple was married, i.e. if the husband was sterile. They probably don't know whose sperm was actually "successful" but with the husband dying in episode 2, the three friends all become dads to the baby.)

But he is still very cute!

just gotta say, javabeans u've been using "oh snap" a lot n i find it humorous (in a good way). i love it! he's a good actor. can't wait to see the mv. btw: i love hong gil dong!! thanks for the awesome reviews!

Remake of French film " trois hommes et un couffin". Check that out.
The Americans did a ramake too. Just check the French out though.

@Javabeans--That take on the sypnosis of his new series makes a lot more sense. XD I didn't know how to actually make sense of it, actually....Korean dramas have gotten more provocative lately (ie. Coffee Prince's homosexuality), but probably not that much.

This post is simply for our viewing pleasure of his beautiful face and body, isn't it? :P I don't mind at all.

Oh, I love him! I hope the video turns out well.

[Oh snap] is what i'm calling the feature whenever the post is all about a photo. Like I mentioned in the first [Oh snap] photo, i'm stealing the idea from Jezebel, whose photo feature is titled "Snap Judgment" (a pun on the word "snap" as in "snapshot").

omg love it!
jaehee is the coolest! esp when he's running!
lol
any1 see him in 3 Iron? he rocks there!
his new drama sounds interesting
is he one of the donors?
lol

But, did you check out his wardrobe???

At least, he put some meat back on his bones. :)

oh how i've missed him.

^^ probably because of her voice?

Ok, besides fangirling, what is this I hear about "3 Dads, 1 Mom?" I was just about to ask if he had any dramas in the works. Plus, I like Eugene so that's a bonus!

Is this still filming? Any set date to air yet? Sounds interesting. :D

he looks as hot as ever. thanks for the heads up, javabeans. ^_^

i think Jae Hee is a great handsome actor i have watched Sassy Girl and he did well in his role. the Arabian people really love you

oohhh jae hee, you very cool.. i like you in all your action..
keep smile..

I really like Jae hee...on how he acts especially in Sassy Girl Chunyang,,...he is one of the good actors that i really admire...