“Friend” gets the drama treatment 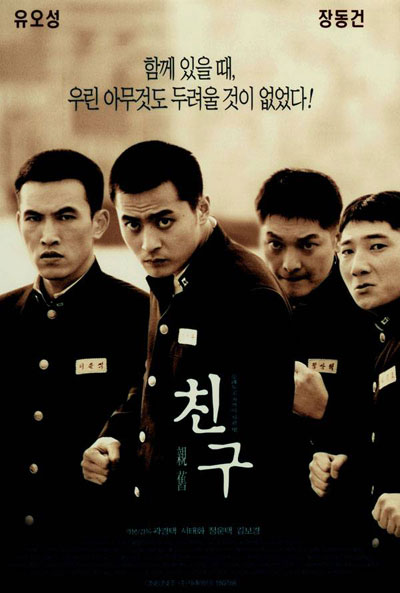 The original film had earned widespread praise, both domestically and internationally, as well as breaking records with its more than 8 million tickets sold. It was, at the time, the top-grossing Korean film ever. The film solidified Jang Dong Gun’s place as an A-list star, as well as elevating the fame of his co-star Yoo Oh Sung.

And now they want to revisit Friend in television-serial form. Although it’s still early (current status is in the synopsis-writing stage), interest is gathering with the announcement that Kwak Kyung Taek, who directed the film version, will be directing the drama series as well. Be forewarned, though; the drama is said to “convey a different vibe from the movie.” Not quite sure what that means. Casting is not yet confirmed, although no doubt they’ll be looking around for a suitably well-known lead actor to fill Jang Dong Gun’s shoes.

So Java, who do you think they should cast as the dramafied version of Jang Dong Gun? and yes i know dramafied is not a word.

Whoa, a "친구" drama? I don't know, maybe it's going too far? I mean no doubt the movie is a must see, but having it turned into a drama....hm.....maybe it'll be good. I mean, Unstoppable Marriage the movie was turned into a sitcom and isn't doing so bad.

It's gonna be tough finding another Jang Dong Gun. Feel sorry for that actor since he has so much to live up too.

Anyway, I don't mind the concept, I guess. Since I'm a fan of the movie, I'll cheer on the drama. Kwak Kyoung Taek, 화이팅~~

they should just do a female version. starring choi ji woo hehe

ummm... I wasn't that crazy about the movie... probably will pass on the TV drama...

I too, second that it be an all female version. That would be very interesting.

Choi Ji Woo would be awesome in this role. There's not more a manly, macho presence in K-drama today than Choi Ji Woo. If Korea ever makes a version of Gladiator, she should play Maximus Unni. Her tears would echo in eternity!!

Speaking of Friend, here's a Nonstop parody of it (and some other movies) where Jo In Sung is playing the JDG role

i thought "Friend" was a great movie and showed JDG's much improved acting skills from his drama days. i can see how a drama version of this movie can be really good or just very cliche...childhood best friends who become enemies later...sounds like a drama that's already been made! :)

i'm also wondering what the "different vibe" entails.. i always thought choi ji woo was quite girly ever since winter sonata.. until her macho presence exploded on air city that is.. it would be interesting to see her as a tough girl gang leader.. this song is totally groovy by the way..

I agree with Serra. They should do a female version starring Choi Ji Woo. She's a great actress, so I'm pretty sure she can do this type of genre. She already been in different genres (melodrama, romance, comedy, thriller, action & strong personality female parts.)