God of Study ends on a ratings high 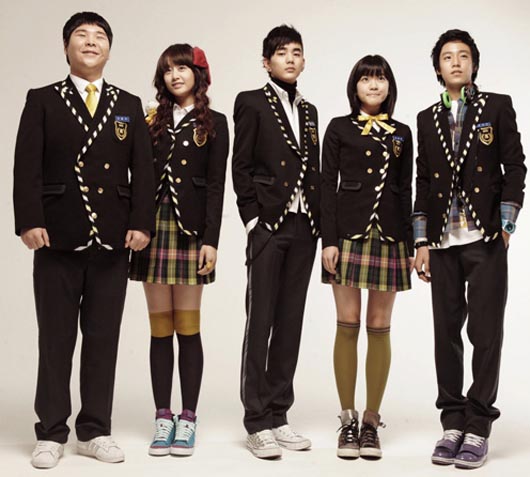 KBS’s God of Study ended today with a strong finale, which recorded a series high rating at 26.8% (TNS Media).

It has led the Monday-Tuesday ratings race for its entire run, although all of the other shows have performed decently as well. MBC’s Pasta had dipped a bit in recent weeks but is back up with a 16.3%. SBS’s Jejoongwon still trails in third place, but not by too much of a margin; its latest episode drew in a 14.3%. (Wish Upon a Star is in an earlier timeslot; after a small ratings dip yesterday, perhaps due to its week off, it’s back up with a strong 18%.)

God of Study is also the first of the Monday-Tuesday dramas to wrap; Pasta was given its extension and will wrap with 20 episodes, Wish Upon a Star was planned for 20 episode from the start, and Jejoongwon is slated for 36.

I haven’t seen the God of Study finale yet, but for those of you who are curious about the ending, which dealt with the big question of whether these kids were successful in their goal to make it to the top-tier Chun Ha University:

[SPOILER]Baek-hyun, Pul-ip, and Bong-gu — played by Yoo Seung-ho, Go Ah-sung, and Lee Chan-ho — were accepted to Chun Ha University. Hyun-jung (Ji-yeon) was not accepted, and it is belatedly revealed that Chan-doo (Lee Hyun-woo) decided not to apply in the first place, opting instead to pursue dancing.[END SPOILER]

Taking over the KBS timeslot is the money-themed Birth of the Rich, starring Lee Bo-young and Ji Hyun-woo.

SPOILER AHEADDDDD (for those who read the spoiler above lol)

the results is completely opposite with the Japanese ver. lol. when i saw the preview for ep 15 i thought it would end up just like the Japanese ver. but im glad it didnt. glad to see those 2 (maybe) working out lol. Have to watch the finale nowwwww to see what happened with HJ :(

Just a question, kind of unrelated to God of Study but inspired by the mention of drama lengths...is there a "typical" length for dramas? I've seen some that are 16, some that are 50, and tons in between (and some even more than 50 episodes!). I used to think that 16 was the norm until you mentioned something about a 16-episode drama being a "miniseries." I've noticed that a lot of weekenders tend to be longer...

I know that there probably won't be an "average" length (because it also depends on subject matter/target audience), but which one would be more unusual: 16 episodes or 50?

That's pretty decent for such a short drama. I didn't think I would really like God of Study at first but I'm up to episode 7 now and I think it's really good, it just took a while for the plot to go anywhere. I won't read the spoiler because I like to be surprised and watching a series to the end is less fun if you already know what happens.

This show did much better than I ever expected. I thought it would range in the tens, but I was shocked to hear it reached past 25% and perhaps it could have made 30%. It's a little different than usual K-dramas, but I'm glad to hear that it's a success!

that'll take away a lot of the excitement for me when i actually watch the drama. sigh. oh wells. x] i'm still on episode 10 right now.. but good for godofstudy(:

I've realized that both are common. That's the reason I'm asking the question, to figure out if there is any unusual length. It's like asking someone, "Are we going North or South?" and getting the answer, "We're either going North or South." But thanks for answering anyway =]

To put it simply, there are several different terms in Korean that explain a drama's general scope/length. In English, we just use the term "drama" as an over-arching term to mean television series. The production companies and broadcast stations, however, further classify dramas into different categories (you'll see them in year-end award shows). "Miniseries," "special production," "long serial," "special planning drama," "special production miniseries," etc. Each group has its own set of characteristics, one of them being length.

I think 16-24 is pretty normal for a Mon/Tue or Wed/Thu trendy drama.

Epic dramas or historical dramas could be anywhere from 20-70 episodes, and are usually shown in the Mon/Tue or Wed/Thu timeslot.

Mon-Fri daily dramas are 30 minutes per episode and usually have 100+ episodes.

I suppose 11 episode series are unusual... or anything lower..
Sometimes 12?

Ah, I didn't realize there were separate categories for what I always just call "dramas." Thanks for the clarification =]

Oh, and while we're all on the topic of drama lengths, (sorry to keep extending the subject!) I've also noticed that a lot of episode lengths, when originally scheduled (so not including extensions or cuts), are in multiples of 4 episodes...is that just a coincidence among the ones I've seen or is there a reason? I already know that they're in multiples of two because non-dailies usually show two episodes a week, but is there any intentional reasoning for 4?

i really loved this drama

I like Pasta....but...STILL , MARRY ME IS THE BOMB!!!!...wonder why the rating low....you guys should watch SMM....it's so addictive that all i thing about is when is it going to be WED and THUR..so I can watch the new episodes...re-watching the old ones now (my 10th time..maybe more)

It's over, but my blood pressure's sky high. The sole reason I watched this for was the cute baby (ok, JUNIOR then) Ji-sub and his bohemianish-teenage-version-of-Lee-Ha-Na-type-love-interest.
It got pretty awesome around mid-way so I knew I'd have to stick to it and watch it till its bittersweet death.

Was sat with a can of ice cold diet coke (hey, i'm at work all week) as a congratulatory treat to pinch open if the ending episode has what I'm looking for but ''Nonh Nonh nonh! Kirijimaayonhh!'' it remained untouched.
Still, I don't regret watching the series, was fun.

I love this series! I was doubtful at first but I think it interesting and makes me want to study harder too....lol i think there is some actually really good tips from the series!! :P

Oh, and next time I should know better and not watch dramas for the wrong reasons. There was a BIIIG clue in the title. *forehead slap*

Considering what this drama was meant to be, it was a pretty wholesome and engaging drama. Will miss those kids too. (Sniffle.)

damn itttttttttt.....i told myself not to read the spoiler but my hand/mouse moved anyways! ugh..oh well.

i kinda had this drama in the background while i was doing stuff. it worked for me since i got to catch the good parts and ignore the boring stuff. it was pretty interesting to watch the kids grow though. that was the biggest attraction for me.

Am watching this (Ep.4 right now) and enjoying it so far. Nice to know that they ended on a good note. YAY!

They definitely tweaked the ending from the jdorama... Good, good... Otherwise it would be too predictable(?), anyway I'm glad it ended well enough... :-)

i like yoo seung ho a lot ..i've been waiting for recaps but since it already ended airing in korea ,,,,think i have no choice but to watch it online....
:)

@ ernie: where are you watching it?! ahaha, because I've been waiting and wishing for mysoju or dramacrazy to upload it, but NO! it's been like a week alreadyyy... :[

Given a lot of overacting and/or underacting throughout the drama, I think the rest of the drama did a good job for itself. I think every kid who undervalues him or herself and doubts their academic ability should watch this drama. Although a drama will always just be a drama, it really serves a good purpose of stressing the importance of education! It's also about being true to oneself - something kids forget these days when they get wrapped up in the pressure to perform.

And also...the blood, sweat and tears! I think I cried every episode....

it interesting about that then i wonder there more upload for video everything from anywhere then it funny who have challage me those math, english grammar, korean, pe like exciuse inlude really tough for students who have want study more for their own dream and chose path way. but it pleasure watch video about that. because that's why i interesting about that before comeday like fighting challange your brain more learn much from teacher or other foregin like world.

Who did Yoo Seung Ho end up with???

P.S. You can catch the drama HERE :)
(http://cashewmaniakpop.wordpress.com/?s=god+of+study&searchbutton=Go%21)

i forgot to mention tt the videos on that link are raw (w/o subs)
better than nothing though :)

I saw the ending last night and I have to say that It was just darn cute.

I won't spoil it for anyone but totally loving the strong bonds between each Student and their Teachers.

Thank you for posting.

I have no special interest in this drama at first, but since it's so popular, I might try watching it later.

For others, I am a bit disappointed at Pasta. At first it is interesting, but as it goes on, I think it is a bit odd and boring in the development of the story, so I gave up at Episode 8.

I am still watching Jae Joon Won, which I think is really a good drama. I understand that not many people would like this, but it is really interesting.

For wish upon star, not yet watched, maybe later.

As a mom i like this drama , all cute kids , love is important but it is not worth to
die for , love is giving not possessing , especially not obsessive . Real friendship is very important bc it stays with you for long time The advices from the teacher to cute little girl regarding her love to her friend are very practical , realistic , healthy . Suffering from the first love , destroying oneself are all out of style .
Dying is not smart solution , it means giving up , only for looser not for normal
, healthy kids .All suffering will change , nothing stays the same forever .
Excellent drama .

Who here looked this show up coz they got an actor/actress
they really wanted to see...
(Ji-yeon from t-ara kinda led me to watching this show..hahahahah!!)

I liked the show.. It makes me wanna go back to high school and study for the exam (which i did not do hahah!!!!)