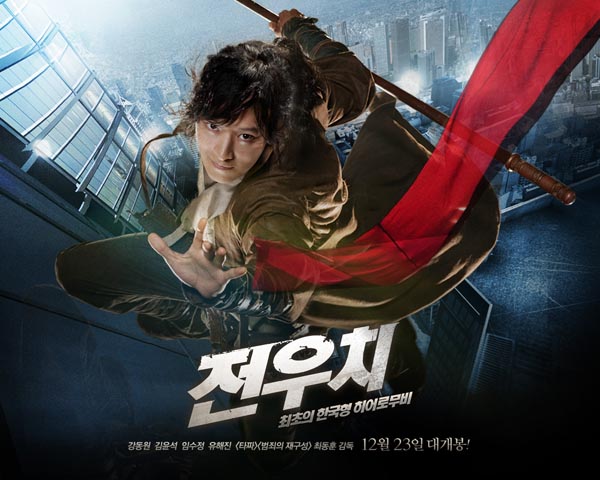 Seems like the all-time box office rankings are being topped and shuffled around every other day, doesn’t it? Kang Dong-won is the newest actor to join the 10 million club — i.e., actors whose movies have sold 10 million tickets — although with the small caveat that this distinction comes from two films, not a single one. His action-fantasy film Jeon Woo Chil, which released just before Christmas 2009, has surpassed the 6,000,000 mark, while his more recent release of Secret Reunion (Korean title Sworn Brothers) was released on February 4 and has now surpassed 4,000,000 viewers.

In the former, Kang plays an errant Taoist wizard who is released into modern-day Korea after being trapped for 500 years in an enchanted scroll. In the latter, he shows a completely different side to himself as a former North Korean spy who acts alongside Song Kang-ho as his South Korean counterpart.

This is a great way for the actor to go out before his mandatory military service. He is planning to act in one last project before he goes, and is reportedly deciding between two possibilities: Busan Project and Supernatural Powers. Both are films, but Kang has not yet made his final decision.

Love him... I'm waiting for "Jeon Woo Chil" uploading on the internet to watch....

How I would love to see him in another drama?1

Jeon Woo Chil needs to come out on DVD! He's the only actor that I love enough to actually buy the original DVD. lol

yeah i thought the math was iffy hahah :)
and another pretty face leaves us! :/

Busan project now call as Camellia is already done with the shooting. It's an omnibus movie , casts Sol Kyung-gu, Kim Min Joon, KDW and SHK are playing as lovers. I heard he wanted to make 2 movies before his enlistment, not only 1?

I hope he does a drama when he comes back from his military service.. I love that man so much. :(

Song Kang Ho due to too many movies to name, Jang Dong Gun due to Taeguki, Friends, Typhoon, Good Morning President and that guy in Heundae belong to 25 million club. Wonbin probably belongs to 15 million club, for Taeguki and Mother.

he's such a brillint star :)

Wut....LOL their PR machines are really in overdrive (esp. while a movie's in theaters.) it used to be 10M has to come from a single movie. this way most actors can tally up all their films and join the club - no losers for all:)

thanks JB! any news from KDW lightens up my day...very fangirlish, cant help it!

I love KDW, but this is not the 10 million club.
This is the 6 mil and 4 mil club respectively.

even his voice can already lighten up my mood.
secret reunion and taoist wizard were both fab!
dong won really has the knock for acting. he's exposed himself to diverse roles!
loveeeet :))