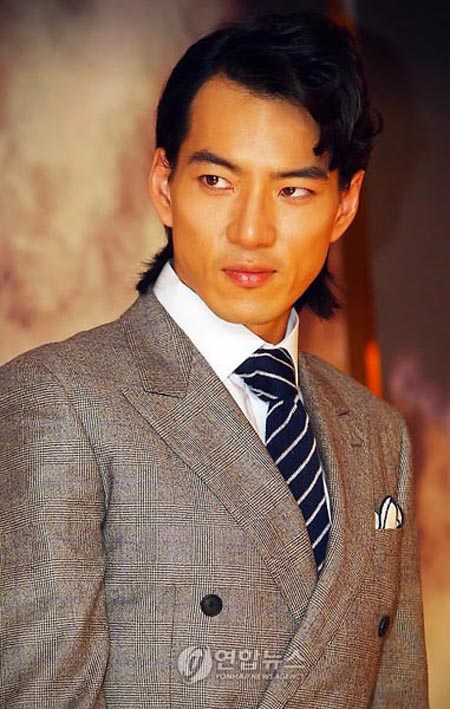 The entire main cast was present: Song as main character Choi Kang-ta, a billionaire and spy also going by the names “Peter Pan” and “Michael King”; Han Chae-young as a reporter and his primary love interest; Han Go-eun as a sexy femme fatale; Kim Min-jong as a sharp special agent with the National Intelligence Agency; Yoo In-young as the precious daughter of the man who killed Kang-ta’s parents; and Jo Jin-woong as a villain.

At the press conference, Song was asked if he felt any pressure playing this character. He answered, “I’ve seen comments asking, ‘Are you so tired of playing kings now that you’re playing god?'” (This refers to his past record of playing kings in historical dramas.) “Rather than feeling pressure, I’m really into this project. I’m immersed more fully than I’ve been in previous dramas. It is a little stressful to be on set and worry about every little thing, but on the other hand I’m really happy.” He added, “This is a role every man has dreamt of playing. The process may be difficult, but I feel extremely happy doing it.”

In order to get into character and get fit, Song even gave up vegetarianism — which he has maintained for the past 15 years — and opted for a diet of lean protein. He has prepared for this role for two years, and even adopted the sharp speech patterns of his character during the press conference. He acquired a motorcycle license and collected props and accessories befitting his character and compiled two scrapbooks. To come up with the new hairstyle, he consulted with the stylist he’s been with since his rookie days and by mutual consent found a new stylist.

I know we’ve commented extensively on Song’s dramatic weight loss so I won’t belabor the point here. I actually do like the hairstyle — it could look goofy but I think it’s got a retro cool about it — and the whole drama seems to be going for old-school glam, like classic noir meets the original Batman. I still really (really) prefer his old look as a person, but as a character I’ll go with it and assume that the sunken cheeks and sharp angles are better suited for the character.

The drama includes an underwater kiss scene between Song and Han Chae-young, which has already been shot. Han explained that she found it difficult as she’s not much of a swimmer, and it was filmed at a depth of 5 meters. However, she said that she felt from the first day of filming that the drama shooting process would be easy to endure because of how much care Song showed for her during filming.

The story of A Man Called God is described as “a modern-day hero story where, through love, the hero comes to realize what justice is and reforms into a warm man, while taking on powerful people to avenge his parents’ deaths.” It premieres March 6.

Via My Daily, DongA, My Daily

There’s nothing more precious in this world than the feeling of being wanted.

and love his drama

So, I just watched the first episode. My mom summed it up best I think.. "It's like a manhwa (comic book). I LOVE IT!"

Yes, it's cheesier than velveeta but I think that's what makes it so great. It's not too heavy but it is sort of serious. I guess it's just a matter of taste. My new favorite thing to watch now that high kick through the roof is almost over.

the summrie of this epsiode i wanted it

I am from Iraq \ Please, I want any one of you help me to watch the serial and

write the manual for the series thank you

[I think this site will provide you English subbed episodes.]

Thank you baby for this nice site

Now I'm watching the serial, such as the beautiful song

Thank you
Million greeting from Iraq and to all the friends

I saw the serial
Combines the past and present

And enters the cave of the mountain

Troubleshooting serial artist is very intelligent and a professional and

space and live with dreams

Ask whether the song is in space, which jumped by parachute or

I saw the serial
Song of his body is very weak, especially the face of what he exerted himself so
Work hard and make-up was a man coming from another planet
But he loved the song I love him

There is no doubt that criticism plays a positive role in

studying the works of art and literature and that he needed

to be guidance that stems from the intellectual and clear

cash by the standards adopted by the critic and criticism

in order to be dependent on careful scientific analysis

must be Critic sincere in his assessment of the artistic or

If you look at the truth at the same time we can look to the beauty,

Mtlaqahan in the meaning of things and making things

Sinarioa and get a good director

And the strong production lead to great success

I saw the serial

Song of his body is very weak, especially the face of what he exerted

himself , so
Work hard and make-up was a man coming from another planet

But he loved the song I love him

Given for the scenes of the sweetness of the follow-up

plz we need to watch this ch in arabic languch

A good Friend is like a computer
he ENTERS in your life SAVE himself
in your heart,FORMATS all your troubles
and never DELETE you from his heart

What a terible pilot episode, almost everything sucked except for the beautiful cinematography. Subs were great, though. Harusubs crew did an awesome job for us non-Korean speaking people.

Calm of the night and the light of the moon with the young, handsome,

romantic music and what I want more of this

this is fantastic dreem , but i saw this in this drama

where Michae walk with girl

many year ago admire you

and got lost looking for him

he is young , handsome

By By MIcheal more fantastic :)

This drama was good but not excellent, alot scenes keep repeated like when they captured Kangta, Vivien than his sister in the tortured basement. I don’t think they need so many episodes. Kangta was the best. there was no chemistry with Han CYoung, HCY acting always bored me to death. But I liked Vivian character and the ending I wish was better done with all the revenged

I really wanted to watch this drama, i’ve waited for a year to see SIG in

i watched last episode guys 100% i recommend this drama to

:
Sure why there was so much criticism in the beginning. I am on Ep 4 and really enjoying it.

: Michael King vows to revenge his parents’ death. Born in Korea and raised in Hawaii, he believes that he can use his power as head of an underground drug kingpin to punish those who hurt him. However, his beliefs are shaken when he falls in love with a reporter named Jin Bo Bae

He is a great actor.I'm so excited about this drama :)