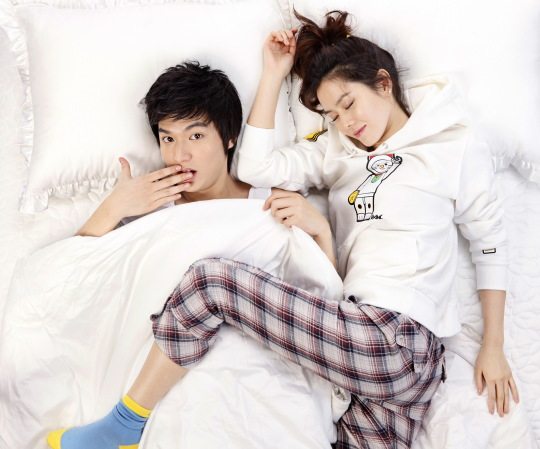 Promo pics are out for Personal Taste! I’ll freely admit that this is the upcoming drama that has grabbed my interest the most, partly due to its giggly-funny premise, partly due to its fab lead actors, and partly because I’m currently reading the novel. (Never fear, when I’m done I’ll write up a general review. I’m about halfway through now, and I’ll say that as a literary work it’s probably (at best) at the level of a breezy internet novel — but as fodder for kdrama fare, there’s some primo comedy stuff in there.)

These stills were taken at the MBC drama’s first poster shoots on February 18 at a studio at the MBC Dream Center. The drama premieres March 31.

I am pretty sure the drama is going to depart in a few key ways from the novel, but the basic gist is the same. In the novel, the hero (Lee Min-ho) is older than the heroine (Sohn Ye-jin), but it remains to be seen whether the drama will tailor their ages to reflect the actors’ real ages more closely. (Lee Min-ho is 22, while Sohn Ye-jin recently turned 28.) Sohn plays a woman, Kae-in, who meets Jin-ho just when she’s suffered at the hands of two douchebags and wistfully thinks that things would be better off with a gay best friend. Thanks to some fortuitous timing, she happens upon Jin-ho at just this time, and through a misunderstanding (which is mostly Jin-ho’s fault), she believes that he’s gay. Taking this as a happy coincidence, she welcomes him as her new roommate, and Jin-ho finds himself tangled up in a misconception of his own making. Shenanigans ensue!

am so excited for this dram....full of win

,on the 2nd pic, Sohn Ye-jin's scrunched up face reminded me of Jang Nara from her My Love Patzi days...My most fave pic of Lee Min-ho is the last one. His facial reaction is amusing. In contrast, on the 2nd pic, I find him acting cuuuuute way too much for the camera's benefit....

son ye jin looks cute, especially in the first picture...but it kinda seems like they're trying too hard to make her look young...which kinda reminds us of the age gap in the first place...o.o i hope its not like boys over flowers again where there is overacting to compensate for the age difference -_- but then again son ye jin is a much better actress than goo hye sun so we'll see

i also wonder if this will be the drama that will pull in big ratings for MBC...

it will be a battle between Personal Taste and Cinderella's Sister...

I CAN'T WAIT FOR THIS!! It sounds so fun and cute!!

cute stills.
So this will be definitely a comedy, and Cinderella's Unni will be a melodrama?
Hmm, that's good!

OMG! What an appealing pics...... Can't hardly wait for the drama!

demmet, I'D wear a doofy ponytail, if it meant i got to sleep on the same bed as lee min ho! :D

Links to the video of this photoshoot:

When I first heard about the plot I thought : " Oh no, not the old story about assumed gay roommate who turns out to be the love of your life."

But will I watch it? Of course! Lee Min-ho is so handsome and cute and I can't wait to see his playful side again. And I wonder how far they'll take it with the gay stuff, meaning his looks, behavior and misunderstandings.

I'm looking forward to it.

the pictures are so cute and the story sounds interesting. can't wait....;-)

btw, JB...you're saying the story is from internet novel. is it in english or korean? where can i read it?

whooaaa.....looks so cute and funny
I like Minho's hair style :D
5 more weeks until it airs

ahh this drama is teasing me~~..
but then The Woman Who Still want to Marry will be over soon...
T_T..

the photos look promising. I may give it a chance in my watch list due to the interesting story. I hope SYJ won't disappoint me again with this show :)

Looks promisingly cute! I'm getting a big Kimi wa Petto vibe, though, eep, that was unexpected.

I'm really looking forward to this, just because I want to see Lee Min-ho again. It seems like a lot of fun, as well...

umm very interesting, definitely on my waiting list. not only its star but i like the story premise. thanks jb for the pics. it's fun to have a gay friend i do understand Sohn Ye jin character.

@maria
I can do with much worse than a pony tail to be on that bed with Minhot.
I was imagining they'd make LMH's image more stylish, like his image in the Cass beer CF... But I like his dork side too. Anyway, can't wait till this airs!

Am I the only one who's not happy that SYJ star in a romcom. She's great in drama, action or thriller but I'm not sure about romcom. I've watched her in The Art Of Seduction with Song Il Gook, and I'm not satisfied with her acting there. I think she has a tendency to overact when she's doing romcom. And by looking at these photostills especially the second one my fear seems reasonable (she looks overacting there). As far as I know she's rarely star in this genre. So I don't know how good she is. I guess I just have to wait and see if she can nail it or not. Just hoping she wont end up like GHY in BoF. But that's me, maybe I'm wrong.

woah!!!
a new drama on the way, waaahhh!!!
i love lee minho, i can't wait how he turns 'gay'..LOL
and minho's gray top reminds me of jun-pyo's everyday wear, hot!

Hahaha this seems so cute and quite refreshing. Looking forward to it now. :D

how can I express my excitement about the drama? I can't wait to watch it and I wish this month could be march.
maybe one of the best couples ever. so beautiful and cute Sohn Ye-jin and awesome Lee Min-ho together, wouuv!!
after not beüng able to watch BOF because of the irritating Koo Hye Sun, to be able to see such a perfect couple with a cute script, it's amazing!!! ^_^

I'm looking forward to watch and its recap...

i'm definitely looking forward to this drama because of the premise and the people in it. but i'm not really digging these promo pics...it looks kind of awkward and unnatural and not in the "that's the point." but whatever, i'm still excited for this drama [and mgy's cinderella's story...teehee].

and I don't know how this drama will deal with the gay issue because as far as I know, Koreans are not really open about this.

LOL LOL....have a feeling this one is gonna be really good! If Lee Min Ho can pull off the same acting quality he did in Boys Before Flowers....he's gonna be terrific! Just looking at the photos and his expressions made me laugh!

We're gonna need something to take us into another good one after Catch A Falling Star is finished!

im getting excited abt this! looks cute and fun!

I am soo freakin excited for this!

YOU READING THIS NOVEL IN ENGLISH OR KOREAN?
CAN YOU TELL ME PLEEEEASE WHERE I COULD READ THIS IN ENGLISH?
I WILL BE MORE THAN THANKFUL!
GOSH I LOVE YOUR BLOG...

SYJ is cuteness personified in these pics, sadly LMH just looks like a washed out, anaemic version of his former self.

LMH: I love you, you're otherwise extremely handsome but please, stay AWAY from Etude House Mineral BB cream in #01. It's scary stuff. Their 'Magic' BB cream is way more natural looking. (Wink)

Not too excited about this drama at this point, but may be swayed otherwise when it airs.

oh i'm looking forward to this drama , like what most of u say it is a comedy romantic drama but i hope it won't become a melodrama near towards the end and create alot of angst just like the story plot of bof. one more thing , pls try not to compare the other actress who has acted with lee min ho because this is a totally different drama asi believe goo hye sun is also one of the outstanding actress.

the stills has boost up my interest by 100%! sohn ye jin looks socute there. she could erase the fact that she's older than LMH.

Hmmm, I wonder what whitening agent Lee Min Ho's using these days... He looks too "bleached/fair" in those pics.

I missed my tall, DARK and handsome Min Ho... ~

@5: I hope there's one for MBC
and my vote is Personal Taste

i came upon the photoshot BTS on YT yesterday..

Lee Min-ho looks a bit stiff around Sohn Ye-Jin. i wonder about their on-screen chemistry.. will they be able to pull it off (as TWWSWTM's MinYoung)

Hey, cant wait for this drama to begin! btw, anyone know whether the novel is in english? and if it is, what is the title?thanks