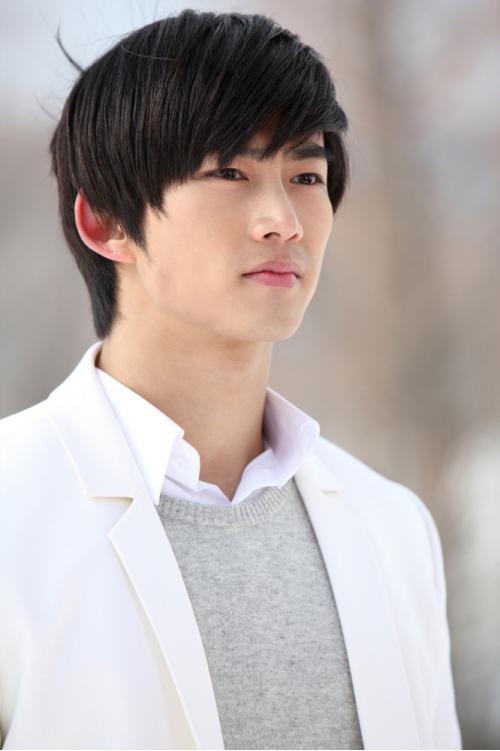 Soon after the first stills were released for Cinderella’s Sister, we have our first look at second lead Ok Taecyeon in character as Jung-woo, who grew up with a difficult (read: poor) childhood and therefore loves to eat (assuming that he didn’t have much growing up). As an adult, he’s a rather simple guy who is single-mindedly in love with with the one girl who used to cook for him, Eun-jo (Moon Geun-young).

As he is an idol singer with boy band 2PM, there’s some doubt as to how well Taecyeon will acquit himself in his acting debut. However, a source from A Story, the production company behind the drama, expressed the team’s faith in Taecyeon, saying that viewers can expect to see good screen presence and sensitivity.

We won’t know how well he’ll carry himself on the acting front till next month, but the boy is looking pretty good. (Not as good as Chun Jung-myung, though! I leave you 2PM fans free to claim this one.)

m looking forward to see him in this movie......he is looking cute./.

I just love to look at him.

So I will claim him! :D Ok Taecyeon, MINE!

He looks like second-lead stuff here, and if he is, hope he isn't all Shin-wooey and stuff.
Taecyeon: If MGY doesn't, I totally will!

What exactly does that mean? He was deprived of food growing up, or he deals with his problems through eating? I guess, we just have to wait.

But Eun Jo knows the way to his heart is through his stomach.

He sure is a pretty boy. Hopefully his acting will not be awful.

He sure looks good.

Now I can only impatiently wait for Seo Woo stills!

yayayayayayayayay i love taecyeon and 2pm and JAEBUM
hope taec does a good job in this drama!
thanks javabeans for providing these gorgeous pics

Despite my reservations about his acting ability, the boy is looking droolworthy. My second male lead-loving side is already making its appearance!

Given the Cass Beer (mini-drama) commercial, he does 'intense' pretty well
(and he had a really cool hair style to go with that 'tude).

The character description for this sounds like they're going for 'adorkable' and/or 'endearing'.

Change the hair style and voila!

Sorry I love Taec from 2pm and all(such an adorable dork) but I don't know his acting capabilities and Chun Jung Myung is in this one and so he automatically wins me over.

Another idol-singer-turned-actor? Wow, there have been a ton of those lately...let's hope he can live up to the challenge! =]

And that, for him, a "rather simple guy" doesn't automatically translate into "wooden face." I guess the silver lining on this cloud is that even though I have this terrible, heartbreaking tendency to prefer second leads, I think I'll be rooting for Chun Jung-myung in this one. Though, you never know, the acting might make me change my mind...

oo he's looking very smart
dunno why i was reminded of go soo in that pic, maybe the hair?
or maybe the bkgrd just reminds me of WISFC lol

The stils released so far are quite moody, yes? Nevertheless, I am anticipating this drama.

He looks pretty good in these pics. Now I want to see Seo Woo..

I don't know about 2PM cause not really following Korean music, but he is so cute in that picture hope his acting good to.....

The stills are still to blah as they give the drama a almost melo tone.. *sigh..
At least the boy looks good!!

His eyes look teary in the stills. Again, the melo winter mood there..

I think he looks pretty good. Not sure about his acting of course, but I'm willing to be surprised! =)

of course he looks good!
and with Chun Jung-myung and Taec, we can fully expect gratuity.

@Snikki: My thoughts exactly. Where is this plot detail going? Is he going to eat until he gets physically sick like Ji-wan in Will it Snow for Christmas? Because if he over eats and keeps it down he'd be a chunkster.... but he's not.

im getting melo vibes from all the stills.. hmmmm...

omg he looks really good and his emotions are very present on his face...i think he'll do good :)

he does look good XD

Love Taecyeon & 2PM!! Can't wait to see him in his acting debut. By the way...he looks great in these pics (loving the outfit...he looks good in white).

Yes... what does hard childhood = loves to eat? Enjoys things that he didn't have before? A way to take out stress? His cure for being depressed? Ji Wan 2.0 with eating disorder and harsh childhood events!? Than the next moment will be, "You can't be with him! He'll over eat and die!"

Although I've been waiting for this drama for a LONG time, so I hope he doesn't pull down the drama.

It reminds me of Rain.

I think having a difficult childhood ("difficult" in kdrama terms means poor) means he appreciates eating the things he didn't have growing up. I didn't realize the phrasing was so confusing; will fix now.

Not big fan of 2pm or even Taec, but sure he looks good in those stills. I'm keeping my hope high here. Don't ruin this drama taecyeon-ah.

He's so handsome in the stills, totally unexpected because he's usually a tough manly guy. XD
This makes me want more of cinderella's sister and I'm sure I root for second leas guy. lol
But I don't like those melo vibrate either, I hope for trendy stuff, please.....

Dramabeans, will you recap this??

Beastly Taec is looking very prince-like. I love him in light colors and tailored clothes...I'll definitely claim him! :3

Whew, everyone is looking so good in this drama...I am so excited since I am a big Taecyeon fan..I really hope he does well since he is acting with veteran actors such as MGY..

Hmmm......ahhhh too young but apparently not young enough because I claim MINE :)

What's with the sad mood though? I hope it's not a real downer. Plus, watching people eat when they're sad ALWAYS GETS TO ME! I can't stand it and it's like the worst thing to watch.

man he's going to be like the mr.nice charming guy who doesn't get the girl and the audience will go wild over how tragic it is that he's so nice but alone.

hahaha...taec...looks so . mild. i still keep thinking he's gonna suddenly rip off his shirt or something like that (case in point: star dance battle)

hopefully he doesn't ruin this drama when he's up against the heavyweights.

but i wonder how will he cry.

you know if MGY's stepsister character was willing to cook food for a poor boy, she can't be THAT evil.

For some reason, I though the would be playing a smaller role rather than second lead. Oh, well... From everything else, he will probably perform well. *sigh* (bitter over another failed idol-actor that I was rooting for) This, by the way, is excellent exposure. *adds to the pressure*

Looks pretty well-fed to me LMFAO.
He looks good though. As much as I despise the mushroom haired look, he actually pulls it off rather well. Much prefer this hairstyle on him than the Korean version of punk one.

its my first time seeing him and my reaction was WOAHH he's damn cute and gorgeous!!
;D

i think the those expressive eyes tells a lot.... i hope he does well!