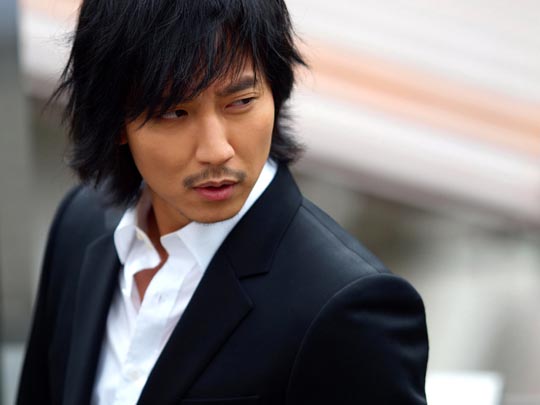 SBS’s Bad Guy won’t premiere until May, but here’s our first look at the three lead characters, played by Kim Nam-gil, Han Ga-in, and Kim Jae-wook. (None yet of actress Oh Yeon-soo, who completes the main foursome.)

These photos come from the production’s recent trip to Gero-onsen, one of the top three hot springs in Japan. Han Ga-in’s art consultant character Jae-in goes there to meet with a famous (but bad-tempered) glass artisan, and first encounters Kim Nam-gil’s Gun-wook character. Gun-wook has come to Japan as the personal secretary to Kim Jae-wook’s Tae-sung character, who is the successor to a large corporation, Haeshin Group.

This’ll be the first drama series for Han Ga-in in three years (since 2007’s Witch Amusement), and she explained her first impressions of her co-stars: “Kim Nam-gil can seem like a jokester, but when he’s acting he is extremely serious and has a diverse kind of appeal. Kim Jae-wook has this cute boyish side to him, so I’m comfortable with him.”

Kim Nam-gil said, “Han Ga-in is one of the actresses I’ve always had a good feeling about. Personally, working together with her on this drama is an honor.” Kim Jae-wook said, “Kim Nam-gil gives off this unapproachable aura so at first I was nervous, but now I’m comfortable with him. He jokes around and is like a good hyung to me. Also, I was really surprised that Han Ga-in, who has a graceful image, is very easy-going and like a guy.”

Bad Guy is directed by PD Lee Hyung-min of I’m Sorry, I Love You and Snow Queen. The production finished filming in Japan on March 4, and has now returned to Korea. In mid-March, they’ll head down to Jeju Island for more filming.

Whoa it's Han Ga-in! Man it feels like ages since I've last seen her in something.

Can't wait to see Kim Nam Gil in something again!

This looks very promising. I love all the actors in this, especially KNG! Can't wait!

omg im so excited for his drama! I love those 3 so seeing them work all together in one drama is great :D

WHOA...that first pic is so nice. May suddenly seems so far away!

To quote Janice from Friends: OH. MY. GAAAAWWWDDDD!!!
Thank you, you just made my week!!! My KNG... I wish he would tie his hair like he did in QSD... so pretty~ *totters away leaving a trail of drool-soaked tissues*

It's probably just me, but I'm getting Old Boy vibes with the first pic. A younger version of Oh Dae-su :)

Looking forward to see how this one turns out!

Can you imagine if the drama had the tone of Old Boy? But I don't think they have the guts, anyway stills look promising, I need a thriller.

if only kim jae wook could get the girl - although HGI is a better match with KNG...

So they did it. They cut Kim Jae Wook's hair. A part of me just died.
Kim Nam Gil!!! I'm not one to idolize (KJW's hair being an exception) but I just love this guy to bits. I really hope this show is a success both critically and commercially, for his sake. Isn't he going into the army after this? Being new to Kdrama world, I've not yet had to bid any of my beloved actors farewell for 2 years. And just when I discover KNG he enlists in the army. *sobs* I'll be miserable.
Not that I have anything against Han Ga In, but I wish they'd cast someone I'm more familiar with and fond of. Lee Min Jung would have been my first pick.

Was he the one in that Portrait Of A Beauty movie?

I need to watch this!

Imagine stepping off the train to see him waiting there ...!

This looks sooo good!
I havem't seen Witch Amusement and don't intend to, so I'm keeping an open mind in relation to the lead actress, hopefully she'll be awesome in this.
And what can I say about the two hotties... eeeep! *makes kissy faces at KMG*

hope this drama is good

I think it can be wonderful drama with wonderful love scene...Im really wait this drama...I want to see the leading actor, Kim Nam Gil...he's so cool ^^

what a compliment to a female.... LOL

oh kim nam gil you melt my heart..so sexy! hahah i can't wait to see this! may is too long but i get out of school at may so that's a good thing. :D

I can't wait for this drama to air. This would probably be the last drama Kim Nam Gil would star in before he serve in the military.

Hahah, I'm SO not going to have free time at all with all these dramas coming out soon. Not that I'm complaining. I'm still not sold on Han Ga-in, but whatever.

Han Ga In... I actually miss seeing her on the small screen. Yeah, she's not the best actress around but she's so likeable (to me, at least).

Wow the story looks promising by the day! I thought KNG is the one as the chaebol, that would be a bit cliche....I also hope this drama will be a big success for him...owww...i`m sure gonna miss him dearly,,,,

My next look out drama after Chuno, will be this, yeah !

Uh oh...I feel a fan girl moment coming on! (Like you didn't see that coming? *lol*)

You know what Kam Nam Gil reminds me of - the young Chow Yun Fat!

I haven't seen a lot of his works, only during his Lee Han days in sidekick roles as HHJ's first husband in Be Strong Geum Soon and the bodyguard/aid in Lovers. But his turn in QSD - just a few clips from YT, not the whole drama - left such a BIG impression on me! It makes him so want to see his other works, especially his movies which seem to be more significant than his dramas.

Bad Guy is certainly one drama I look forward to!

By the way, does anyone know what KNG does in Terroir? I can't recall seeing him there.

I'm so excited to see Kim Nam Gil here. However, I don't dig the "ajeosshi" look on him. I miss BiDam!!!

Oh, please make-up artist (whoever you are), MAKE HIM LOOK HOT (again). He looks too old in the stills above.

Is it TRUE that he still hasn't decided on enlisting this year? Just asking.

"You know what Kam Nam Gil reminds me of – the young Chow Yun Fat!"

I guess I can kinda see that. I'll need to see him with two guns and a toothpick. SIGH.

hello kim nam gil i'm one of your avid fan and we wanted to say that you're a great actor and we admire you a lot esp. in QSD....happy birthday to you!!!!goodluck to your career and more power!!!

for sure, i will watch this. oppa kim nam gil saranghae. i wish that you will take a good care always eventhough you will join the millitary service. huaaa. i must watch all of ur project this year. if you tired, just go to Bali Islands and you will get more relax! I love you Kim Nam gil!!

i love kng on qsd as bidam... there's a lot of raves over this drama, hope it would turn out to be a nice to watch series.. im a big fan of han ga in.. hope her acting will get better than before.. haha nice to know she's actually song seung hun's ideal woman.. yehey.

hi Ms. Han Ga In,i miss your drama and movie....i'm waiting for your new movie and drama....goodluck to youre career and more power.....i love you....

im drooling over KNG. this is my first time to admire a korean actor. he is a very good actor who gives justice to his roles, and a very good person who serves those in need without asking for anything in return. i hope your "light" will not die while you're in military service. 2 years is a long time, i sincerely hope you can come back as hot as you are going out.