Bae Soo-bin as a beggar in Dong Yi 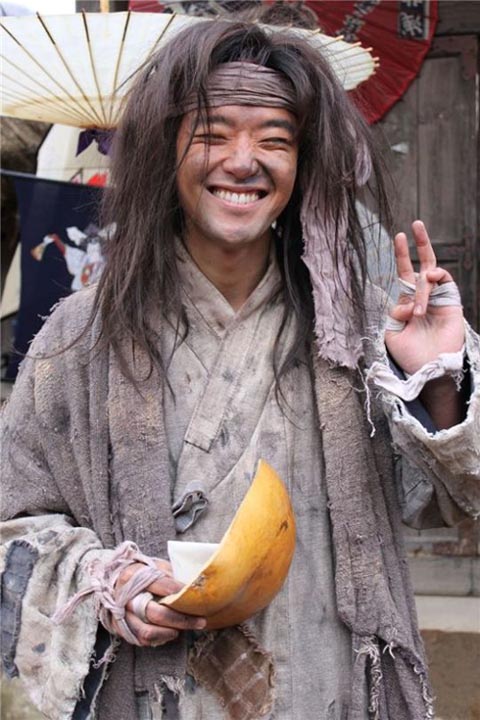 I knew Bae Soo-bin would be playing the part of the handsome guard in MBC’s Dong Yi, so I wasn’t expecting to see this side of him; he’s dressed as a beggar in these latest shots, which the actor released on his homepage. These scenes will be featured in the first episode, which airs next Monday.

No doubt he’ll be neatened up in no time, though; I’m sure we’ll be seeing him looking more as he appears in the last photos below, dressed in cleaner, crisper clothing as he watches over co-star Han Hyo-joo.

Dong Yi follows the life of a woman who becomes a king’s concubine in the Joseon era, amidst court intrigue and jealousy among the king’s women. Dong-yi herself is a kind and loyal character who becomes the trusted companion to the queen (who was historically believed to have been poisoned by another concubine, played here by Angel’s Temptation‘s vengeful lead, Lee So-yeon).

why does he look good even as a beggar?...can't wait to see him..will he get han hyo joo this time?

i hope he could overshadow the king's acting...just like how bidam stole the spotlight from Yushin, kekeke

that is one hot beggar

Somehow he doesn't look like a beggar to me... maybe the hair.. it's so shiny... his skin is shiny and clean... (In the photo of him sitting... you can see where they just put dirt on certain areas.. and in others.. it so shiny looking~~~ :D )

he is one freaking amazing beggar
i'm really liking the white teeth and the dirty face:P

he's one happy beggar! so cute!

oppa what happened to you?... don't worry come to me i will give u a sponge bath ^^

wow.. i've never seen a beggar look so happy to erm.. be a beggar. lol

also, has anyone called shotgun on Bae Soo Bin yet??

he looks pretty cool for a beggar
the first image reminds me of a clip he did recently with lee soo young dazzle
he plays a rough cowboy who saves the girl from evil men
what he wore in that mv was hot but this, he looks a like mr hwang
the butcher in jejoongwon

"...(Inhyeon) historically believed to have been poisoned by [Jang Hui-bin]..."

Inhyeon Wanghu was poisoned? I thought she died from an unknown illness in 1701...?
...while Jang was execution-by-poison (sa-sal) same year due to her being found out with his brother (Jang Hui-jae, who's gonna be played by Kim Yoo-seok (fron "Thank You Life", among others) & a Shaman priestess praying for Inhyeon Wanghu's death...

Off topic: Sukjong (Ji Jin-hee)'s royal mother, Queen Myeongseong (not related in any way nor to be confused with the last empress, albeit more with different hanja), will be played by Park Jeong-su (who is quite familiar to others as Lady Park Yong-shin, the jae-jo sang-goong (who was quite villainous, but was not very EVIIIIIIL (that was Lady Choi)) from "Jewel in the Palace"))...

@jumanji
i really agree with you .. hope thats what he's character is ..
with that , i have another one on my list :)

Even as a beggar, he's still hot...gosssssssshhhh :)

The more I see those eyes, the more addictive they become. I will watch this just for him.

@20, yesss.. absolutely agree. His eyes are gorgeous, those eyelashes are thick too..

i like all the casts , i hope they are doing well in this drama .likely they need more
support handsome hot casts as in Chuno to make big hit . Directing and script
had to be amazing other wise just like Jejoongwon , so boring .

what a good-looking beggar! :D

Anyway, yeah, BSB is one hot beggar, I would empty my pocket for him, he he he...

i really wish he was lead though...just so he can finally get with Han Hyo Joo lol xD
I loved him in Brilliant Legacy...damn he makes one fine begger haha

wait, if bae soon bin is already coming out in the first ep, they're not spending a lot of time with the child actors are they? i was expecting a couple of episodes at least, considering it's going to be 50 episodes - and the trailers make it seem the main character's going to have a bit of backstory for when she's young.
oh well, looking forward to it! <3 the trailers are absolutely magnificent.