Birth of the Rich’s childish plot has viewers frustrated 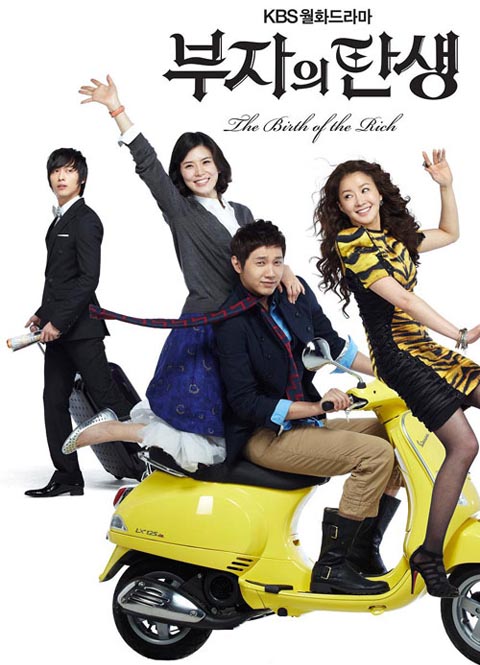 KBS’s current Monday-Tuesday offering is the drama Birth of the Rich, which has so far aired four episodes of its planned 16. Ratings-wise, it’s in last place but holding steady with 11-%12% ratings. It’s not a fantastic number, but it’s not terrible.

However, reviews are starting to turn harsh; the first episode had elicited tentatively positive comments about its fresh tone, but now with four episodes aired, a lot of scorn is being dished out. Unfortunately I can’t weigh in too much (I saw one episode and thought it was average, and have neither the time nor inclination to continue), but I came across a number of reviews that might be of interest to curious folks out there.

Alas, the prognosis isn’t good. The most common complaint is that the drama is childish and the acting spotty. While the men are generally accepted as holding their own (Ji Hyun-woo and Nam Goong-min), the ladies (Lee Bo-young and Lee Shi-young) are not so lucky, and have been criticized for their unsteady performances.

Despite the fact that the drama is clearly about money, viewers are irritated that there’s TOO much emphasis on money. On top of that, viewers point to the forced plot and cartoonish scenes as big detractors. But what I find curious is that there’s a notable lack of response countering the criticism.

Here’s one review from My Daily:

“With a trite topic like birth secrets… every situation is overrun with irrational setups. It’s like a grade-school drama written with a grade-school imagination.” “Do they mean for all the necklace episodes to be interesting?” “It’s ridiculous that they’re still making this 20th-century-style drama as a current Monday-Tuesday miniseries.”

Viewers are eyeing KBS’s Birth of the Rich, which premiered on March 1, with cold gazes.

Rather than words of encouragement, the Birth of the Rich message boards are full of words of criticism for the PD and writer. The problem is, producers can’t easily counter these viewers’ comments. The weaknesses are revealed in the drama and have to be acknowledged.

The area drawing the most attention is the issue of Seok-bong (Ji Hyun-woo) showing the necklace to the man who doesn’t know that he may be his father, Chairman Lee (Yoon Joo-sang). The pendant is the drama’s most important linking element and of course it can’t be brought out suddenly in the beginning, but the show isn’t able to smoothly stir up conflict through the necklace.

Seok-bong was given the necklace — his father’s — by his mother, who had a fateful one-night stand with a rich man who promised to come for her. Clearly that didn’t happen, and therefore the man never found out that the woman had become pregnant and bore his son.

Seok-bong’s primary goal, then, is to gain access to the chairman so he can show him the necklace. When Seok-bong goes to Chairman Lee’s home, he finds a seal bearing the exact same icon that is imprinted upon the pendant, but through misunderstanding, he is kicked out of the house. He then camps out outside the house and is dragged off by police. He goes through a variety of obstacles and missed opportunities before finally meeting with the chairman.

In the episode that aired on March 9, Seok-bong is just about to take out the necklace to show Chairman Lee, but loses the chance because Lee’s beloved dog falls ill.

The man’s butler bursts in to tell him the news that the dog has collapsed, and Lee rushes out. As another review puts it, “It’s the height of forced and absurd situations to prevent him once again from showing the necklace because a dog suddenly collapsed.”

Afterward, Seok-bong leisurely enters the residence of Korea’s top businessman disguised in black. He trespasses safely to the chairman’s room, and in the end he even blocks the chairman’s mouth [to prevent interruption]. It’s no surprise that this drama ends the episode with him just about to take the pendant out without anyone to stop him.

However, it has been hinted that he has actually lost the necklace, having previously gotten involved in a fight, and this meeting will likely come to nothing. Viewers are getting frustrated with this repetition and the notion that his chaebol birth will be confirmed by the sight of the necklace. And that’s not the only plot point that’s drawing complaints:

In order to get Tae-hee (Lee Shi-young) to overhear Shin-mi (Lee Bo-young) and Seok-bong’s conversation, she plants a bug in a basket of flowers, which Seok-bong discovers and uses to lure her to a false location.

In order to block the release of a video clip of the company’s brand model and her live-in mate, Shin-mi and Seok-bok go on a stakeout. There, they watch a Gag Concert on their cell phones, play along with 1 Night 2 Days‘ “lucky-unlucky” game, and sleep outdoors. It can’t shake off its childish feel.

Aside from this, there’s the problem of Lee Bo-young’s inability to get fully into her character, which has been pointed out from the start. Lee Shi-young’s and Nam Goong-min’s acting feel out of place, too. There are more than just a few problems with Birth of the Rich.

Lately KBS has monopolized viewers’ attentions to such an extent that some have called it a “KBS Renaissance.” Starting with last year’s IRIS and followed by God of Study and Chuno, KBS has had hit after hit, chipping at the morale of the other broadcast stations.

However, Birth of the Rich is in trouble with the ill-will directed at its character of Seok-bong, who boldly declares that he will become rich, and its lazy storyline.

It’s fine for a drama to mix in exaggerated storylines. The problem is when those stories are sewn together with stitching skills that are so lacking.

Via My Daily, OSEN, Newsen

Tags: The Birth of the Rich

ji hyun woo is soo charming on this drama! next week will be the last 2 episodes at kbsworld. wish that the lead casts will do another k-drama romance...i really enjoy watching them!

I totally agree with Ruby. There's just something about seok bong and shin mi that is interesting to watch. I like this drama because it's very relaxing and stress free. Who cares if the events are exaggerated? As long as it makes you laugh, it's enough for me.

so far i watched.. its a good drama though . i love Ji hyun woo, can expressed so live.. thanks for the recaps anw.. :D

i watched only because of the second couple. The girl was sweet and funny, and the guy good looking.
The main lead guy was so-so, especially lame was when he did the bet that he will receive tips from the scrooge lady and I was expecting a lot of funny tricks. But he just was plainly asking her every time for it. But at least he was shown as smart. The main lady? Annoying, not good looking, full of pretence. She was suppose to be a strong and independent, but could not do anything without the lead guy.

in response to 36. if you had continued watching, the episode on the mink vs regular coat episode, you would have realised that it was because malalia, the wife, was the president of the Animal Protection league. thats why Bu Tae Hee lost

well I LIKE the drama and specially the director cuz of her personality and the sweet romance between her and choi seok bong....uuuuuuuuuuyyyyyyyyyy im on episode 19 and it doesnt matter if the plot was all over the place .... i just like it.

ok, i dont like to judge something until i see it completly, and normally i dont watch such long dramas, im normally a 16 epiperson, now, for this drama, i started it, yes it really did get boring by the second episode, and although i had the urge to stop watching, ive continued watching it, it really does get iritating how the girl is kinda bossy and how the whole plot is so predictable, like how sometimes you would guess something and get really happy you got it right, but for this, its like, oh, i got it right agait? and you yay surcastically... you know, anyways, that being said, i feel i shouldnt be critisizing it too much cause i have no succesful drama to brag about, but, it was still weak in my perspective, i think, i could actually posibly wright a better drama... :/ just saying! :) anyways once again, although i do say this, i do feel like people might be going too far with their feed back on how it was!! the person who wrote it must have put a lot of effort in it and i really apreciate them for their hard work! and ill continue to watch it until i finish it completly, at least, il try... ;) i really will! mark my words!! :)

I just watched this drama out of curiosity coz similar title of The Birth of Beauty. But surprisingly I loved it. I like the love story of Seok-Bong & Shin-Mi. I like so much Lee Bo Yuong so I keep watching many times. I love Korean Dramas.