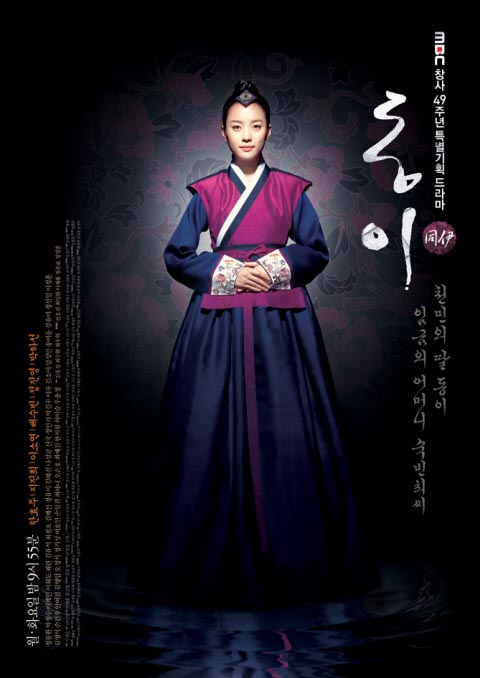 Speaking of new Monday-Tuesday dramas, here’s a look at another: MBC’s Dong Yi comes out the same day as SBS’s Oh! My Lady, albeit an hour later in the regular prime-time slot. These new posters feature Dong Yi‘s lead actress in the title role, Han Hyo-joo. In reference to her character’s initial status as a water maid in the palace, the main poster above shows Han standing on water.

My personal favorite is the third poster, which shows the progression of Dong-yi’s character in the two images of Han Hyo-joo. At left, she is a simple servant girl, and she later becomes a royal consort and mother to a king.

Dong Yi premieres next week, on March 15, in Pasta‘s slot on MBC.

Han Hyo-Joo is a beauty. Isn't the Jewel in the palace guy a little too old for her?

Wanted to add that she has the most beautiful mouth among all Korean actors. Amazing upper lip and the way the corners curl up. Doesn't look fake at all.

Ooh, looks interesting. I like how in the second picture with HHJ as a servant girl, she looks bright and happy. But in the right image, her expression is completely opposite. I like how they did the two expressions next to each other :D

@Sonam: Nah, maybe if this was a modern time period drama. Since this is a sageuk-type drama and JJH is a king, age wouldn't really matter.

Han Hyo-joo is so pretty...can't wait for this drama!!

There's a slew of dramas coming out in the next few weeks. I'm happy, but I'm also sad because it means all the old ones will be ending.

Love the posters, thanks for sharing! =]

the posters are beautiful! i love the first and third ones :)

I love the first poster. So beautiful. :)

I haven't actually watched any dramas in a long while, but there are a few that I'm actually excited to see. That Cinderella one with MGY for one, Personal Taste for another, and then this one. I find myself liking LBH dramas, even though Yi San did drag more that DJG did but it was still watchable.

I wonder who are going to play the supporting roles. I love finding people who've been in LBH's other dramas and see how different they are in each role.

Hope he gets Han Hyo-joo this time. Too bad Lee Seung-gi got her in "Brilliant Legacy" :)

OMG I can't believe I forgot Dong Yi will premiere next week!!!!! I cannot wait. Bae Soo-bin is love!

@ 10
No chance, I'm afraid! The whole story is about Dong Yi (HHJ)'s transformation from water maid in the palace to the King's concubine. Bae Soo Bin plays her protective older brother figure.

As much as I love these two actors, I'm not sure if I'm ready for the kind of commitment Dong-Yi is asking. I'm still reeling from the 62-ep run of QSD.

am not to fond of Sageuks, well except for Chuno (&Hong Gil Dong) but I'll give this a try, cuz I like all the actors in it!!!

I can't wait till this comes out! Shes' so pretty too!!

Ahhh BSB won't get her again I presume. He's the second lead guy, right? Poor him.

HHJ is beautiful, as always.

Oh dear. I see myself being sucked right down the saguek drain yet again. 50 episodes, eh? Well, I can wait until it's on locally anyway. At least this one I can suck in the rest of the family for massive MBC America watching.

hopefully Han Hyo Joo can pull off this one even though it's like too early for her to have a title role, in sageuk at that.

Oh Bae Soo-bin, I love you... please get yourself cast in a drama where you get the girl, ok? *sigh*

Love the posters for this one!

huge age differences....
it doesn't matter if its modern or not...

aaah JJH in a historical drama.
and the posters are *so* pretty.

I think HHJ is so pretty and talented. I'm going to have to keep my eye open for this one.

While you guys are commenting how "old" Ji Jin Hee is,I MINE him to myself :)
The man is gorgeous, and I actually prefer him in sageuk since I fell for him since Dae Jang Geum....*sigh *another drama will be postponed since I have to watch MINE :P

As for the age difference between Ji Jinhee and HHJ, Ji Jinhee is only a bit older now than the real King Sukchong was (33) when he had his son by Choi sukbin (HHJ's character). She was most likely very young. No older than in her mid 20s I'd presume. So let's not impose modern attitudes re: age differences anachronistically onto the past.

Hope HHJ can deliver bcos in Iljimae she was very stiff and her acting not an eye catching. In BL, the second female overshadowed her.

It is good she choose this drama, it will give her more exposure bcos it is totally about her character hence more screen time.. and from the trailer, can't judge her acting, so just wait and see.

I can't wait for Angel of Shining Waltz. Or was it Brilliant Spring of Temptation?

And good luck to Han Hyo Joo. I have a big, big weakness for this director (yes, yes, I know he makes Vacation Trip Sageuks, but I love his narrative style, if not always his narrative choices.)

i am not fond of HHJ but it's a sageuk and it's JJH and BSB!

#29 - I love the way you jumble up all the titles! Yes will probably check out this show cos love all the 4 main characters. Lee So Yeon too!

Love the 1st poster's message...
(something like)
"Dong-yi, cheonmin status...Lady Choi, the Pure Concubine, mother of a King."

Now I'm determined to request to JB for recapping the 1st 2 eps... :D Good luck to me!!

My personal favorite is the first pic shown above. I like the "standing on water" concept. It's so symbolic! Anyway, I'll be looking forward to watching this drama. Although, I hated (re: past tense) Han Hyo Joo in Iljimae (well, basically because of that "first kiss under the plum blossom" scene with Lee Jun Ki, hehe), I still think that she'll do well in this drama. : )

She is so ridiculously gorgeous it's not even funny.

Solid casts , hopefully we are going to have interesting plots ? script , smart
directing . I 'm tired of Jejoongwon drama due to poor plots and poor script .
Hard to find good historical dramas as Jewel in the palace , Immortal
Admiral Yi , Damo , Jumong , I 'm watching Chuno , so far so good , good
acting , directing . interesting plots / script .
Another drama might be good is road number one with my favorite actor SJS .

I just watched the trailers and can I just say I LOVE the child actress who plays young Dong Yi. She is the cutest, prettiest, little girl I've ever seen!

Leave it to MBC to do sageuk. SBS hasn't done a saegeuk that interest me.

Thanks for the posters :). They are quite lovely and I am looking forward to it.

These posters are gorgeous! I've been looking for another lengthy sageuk to fall into and this will probably be it.

However, the premise does irk me a little bit. A watermaid becomes a royal concubine and gives birth to a King. So... does she do anything? Besides lay on her back?

39, you could say that Yi San had an identical premise with Song-yeon going from damo to concubine, but she did all kinds of things.

I only wonder if there will be anything to distinguish this from Yi San, because they are awfully similiar and have the same director and writer. And Lee Ip-sae is unlikely to be in the cast. Bah.

Actually, Choi sukbin did important thing against lady Chang. (aka Chang Heebin). Although, she was known as the poor and good servant to bring back the expelled queen and did her best to serve her, but after the queen died, Choi sukbin tried to do all to reveal Lady Chang's evil doings and drive her to death, which is very much political things.

What shop could I buy these at? I live in middle Georgia, USA, so there is not much local demand.

hi.i love Dong yi a lot.i wish i had her email address.