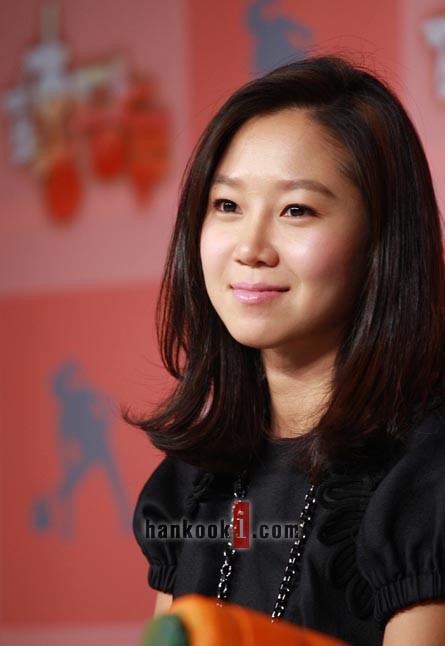 Having just ended her recent drama project, Pasta, actress Gong Hyo-jin has picked her next movie role. She’ll take the lead in How To Travel With a Cow [소와 함께 여행하는 법], the next project from director Im Soon-rye, who helmed the hit sports movie Forever the Moment.

This movie is an adaptation of a novel of the same name written by author Kim Do-yeon. It’s a road movie that kicks off when a poet living in the countryside sells his cow, but feels dissatisfied at the low price. He receives a phone call from his ex-girlfriend (Gong), who left him seven years ago and married his friend. Now his friend has died and she asks him to come to the funeral, so he takes back his cow and travels with it to the funeral. He then travels on with the woman and the cow, and the movie unfolds as they encounter various situations along the way. Kim Young-pil (My Love By My Side) plays the lead character.

Sounds like a quirky movie, and I can see Gong’s quirky, natural appeal fitting in with this kind of low-key story. The last film she shot was Crush and Blush two years ago, in which she played a bad-tempered teacher plagued with a condition where she blushes frequently.

How To Travel With a Cow will begin filming in April and will release later this year.

Oh I love her. She looks so beautiful in this picture. So nice to see a natural nose.

and i see some new dramabeans headers, cool!

Such a fantastic actress, looking forward to her new movie.

YAY!!! I really adore her, she is such a good actress.

its amazing how Hairstyle can change so much in a person's looks..

She looks so young and hip on the pic above but in Pasta her hair made her look older which fitted the character.

i Love her there and the chemistry with the male lead.. *withdrawals*

I love Gong Hyo Jin since Thank You drama.. after watching Pasta, I love her more now. Congrats on her new movie.. but hope to see her in another romance comedy. She's a great actress...

My fav actress!. Looking forward to watch her new movie. She is looking very pretty here. This hairstyle is better than the one in Pasta.

At first I wasn't a fan of Gong Hyo-jin ....I had watched her in "Hardtack Teacher & Sugar Candy" and also "Thank You" but something about her just ticked me off...however after watching "Pasta" I've really come to like her...maybe cause her character was so real and likeable in the drama that drew me in....I can definately see her doing this role, she's got that natural quirky facial expresions

i agree she is pretty and looks fresh here..i really like her

she was the most 'normal' korean actress I've ever see..
so fresh and natural and yet a really good actress..
really rare gem.

i love love GHJ. She has this 'natural charm' about her, and I don't think she tends to go for roles which are largely similar, and those with the usual storylines. Which makes me appreciate her even more.

just to let you know the last film she shot was sisters on the road, that is a road movie as well... geetings

Oh, so much prettier without the bangs!

I agree with everyone, I pretty much just wanted to kick her in Thank You, but fell in love with her in Pasta. Every time she said "YEH, CHEP!" I loved her more. :-D

gong Hyo Jin is the kind of actress that make you watch her project..because she is good.

i'm really really love her,
pretty, young and fresh
happy knowing that she's the only one natural actress
not so pretty but the inner beauty always comes out
keep hod on like this,,,,fighting

Hyo Jin, is one of the most talented and versatile actresses any where, including hollywood. The roles that she's tackled over the years range from tough gang member to desperate mother. And she nails each one. She is able to go from homely to hot with only slight changes in her wardrobe, hair and makeup. She can do action and drama and has great comic timing, I think she's one of the most naturally beautiful women in the world. The fact she is so comfortable with herself makes her ridiculously attractive.