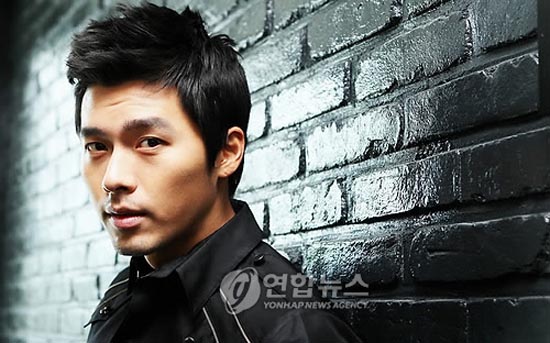 On March 11, Hyun Bin was a featured guest on the radio show Gong Hyung-jin’s Cine Town, in which he spoke honestly about his career and current projects. In the program, he called his earnest good-guy image “stifling” and explained, “I’d like to live it up and have fun, and enjoy things that other people my age enjoy on a daily basis.”

He also talked about his current project, the Late Autumn remake, which just wrapped shoots in Seattle. Of working with Tang Wei, he said, “She has a very different acting style from me, so at first we were going in different directions. But as we kept shooting, we worked together very well.”

With over 90% of his dialogue in English, he explained that “before the film began shooting, I went to Seattle early and studied English for two months. That helped a lot.” (In the beginning, I’d felt dubious of whether he could pull off a film entirely in English, but it appears his and Tang Wei’s characters are both immigrants. Thus keeping their native accents is actually part of the film’s intention.)

Prior to the broadcast there was speculation about whether he would speak up about his high-profile romance with fellow actress (and The World They Live In co-star) Song Hye-gyo. Unfortunately for the curious, he did not.

THAT is a seriously nice pic of him....

yes, im still dumbfounded by the fact that hyunbin was in seattle for three months and i didnt even get a chance to bum into him on the street. dang it! do you feel me? boohoo.

Is it just me or did he get even more handsome?

I find Song Hye-gyo too cold even though she's beautiful. as a follower, I wish he could be such a warm and cute girl like YEH =(

I had to be home at one point then. Gosh darn school.

I'm really looking forward to the movie. I remember hearing that it'd be mostly English dialogue and cringed. But hopefully they can pull that off. Thanks!

Oh Binnie, why do you feel you can't do what guys your age do? *starts imagining things* WHAT exactly do you want to do that a good guy can't?

I'm rather meh on the movie. I'll probably watch it because DUH, it's with Hyun Bin, but...the story doesn't appeal to me at all. :(

Late Autumn keeps looking better and better to me...

How anyone could watch him in Friend, Our Legend and still label him as a "good guy" is beyond me. He was mind-blowing in that, I'll never forget it. Or recover from it.

Shallow observation (y'all knew it was coming): OMG SO BEAUTIFUL!!! :-D

At last, news of the god of my idolatry (thank you, thank you)! Some interesting and intelligent film maker (e.g. Ang Lee, Takeshi Kitano, maybe the veteran, and now 'hors de combat', Nagisa Oshima, or closer to home, Matthieu Kassovitz, or ultra art house and wonderful, Chantal Akerman), please give the man something to sink his teeth into. It is time mainstream cinema understood that the good (and the Good, the idea of) are complex, ferocious and necessarily (given the state of the world) at odds with the world, absorbing all the social contradictions they rise against. Sweet does not spell good, 'cute' even less so (involuntarily reproducing reality as it is), ...don't people (especially film people) read Nietzsche and Adorno, anymore? Binnie is game, it seems, so what are the rest waiting for? Give the man some characters with spiralling depths, let him explore the darkness within and without.
I'm also a great fan of Tang Wei, she was unforgettable in 'Lust, Caution' and brought out her character's suffering, innocence and bewilderment, with great accuracy. I still remember her excellent representation of a life caught (lived) in violent times and under terror, and the courage with which she shed some light, for our benefit, on the dark (very dark) paths of love and desire. One must also remember that she went up against King Tony Leung and managed to leave a lasting impression, no mean feat that one. I suppose, the usual, not-innocent, peccant, but prudish and vociferous throng hunted her out of our screens, since I have not heard anything about her post 'Lust,Caution' career. So,it's good to know she's coming back and partnered with Binnie into the bargain.

...and he started out playing a bit role as a psycho-rapist (wannabe) w/ some very green swimsuit strutting screentime in BODYGUARD!!

I wonder what's the acting style of Tang Wei vs Binnie. I suspect binnie is the over-prepared type, everything very rehearsed, studied.... and can I assume Tang Wei to be very spontaneous and lover of ad-lib?!

Very curious on how basing it in Seattle will be at play w/ the classic. It's not really related, but Snow Falling on Cedars (the book) is creeping into my mind.

@langdon, but the sad truth is not a lot of K audience has SEEN him in Friend, Our Legend. He's officially adopted a j ahjumma pet.

thank you for posting about this
nice to read

he explained that “before the film began shooting, I went to Seattle early and studied English for two months. That helped a lot.”

OMG I had no idea he was here for that long! :O

Not only that -- these are non-good guy things he wants to do on a DAILY basis. So, we're not even talking about the weekend wild party, but something bad-boy to be done every day of the week? O_O

“I’d like to live it up and have fun, and enjoy things that other people my age enjoy on a daily basis.”

My imagination is running wild here. What is it that he can't do and enjoy that is bad boyish. Tell us! What is it! I must know!

“She has a very different acting style from me, so at first we were going in different directions. But as we kept shooting, we worked together very well.”

I wonder if they felt ackward and uncomfortable with each other due to the difference in language. Considering he is suppose to be reticent, I wonder if he ever thought during the filming , "What the heck am I doing here? What were these people thinking putting us together?!?! I want to act with my pooh bear SHK"

“before the film began shooting, I went to Seattle early and studied English for two months. That helped a lot.”

I think he is saying he drank coffee, checked out the space needle and hung out with SHK for two months

I didn't know Hyun Bin had a goodie image. Anyhow, I guess he is a "bad" boy at heart. But boy does he have the nicest chiseled face. Did anyone get a sighting of him while he is was in Seattle?

aw i wanna hear about the romance! :D