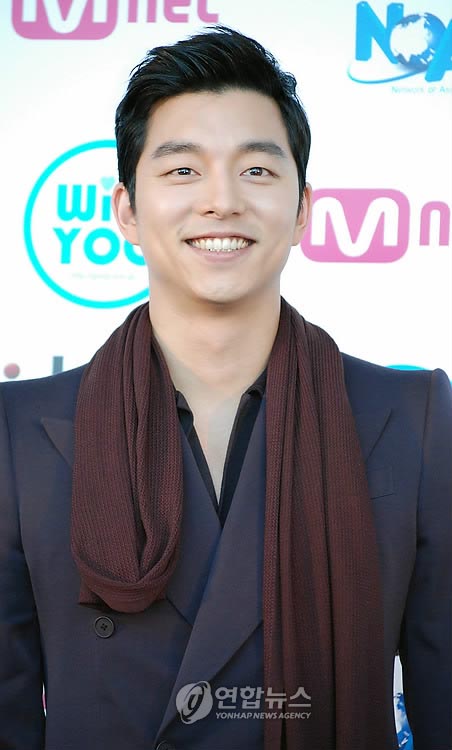 Over the weekend, actor Gong Yoo held his first fanmeeting in Japan in three years; it follows his recent Seoul event in January which was his first fan event following his army discharge in December. There were actually two events, one in Kobe on the 26th and another in Yokohama on the 28th. The affair was titled “Gong Yoo Fanmeeting 2010 — With YOO.”

Prior to the meeting, Gong Yoo spoke to reporters and explained, “Things haven’t been decided yet, but I’m currently thinking of a next project that’ll be good enough to satisfy fans. I’d like to take a film role first, then do a drama for the fans.”

His Korean fanmeeting in January had a decent attendance size of 1,000, but these were even larger with an attendance of 5,000. The following photos are taken from the meeting with reporters preceding the Sunday event in Yokohama.

Good to see him back looking refreshed and healthy, isn’t it?

He looks almost the same in all the photos... Healthy and a little Superman-like. XDDD

Can't wait to see him on screen again! I'm excited!

Yoo oppa lookin as fine as ever!

That cheesy goofy smile is back and I said that with love... I missed my Yoo!!! Welcome back bb!

Judging from other comments, I guess it's just me that the first picture kinda scared me and looked like something from Madam Tussaud's?

I cannot contain my excitement whenever I see the name "Gong Yoo" in an article here, or well, anywhere. *g* I can't wait till his new project, whatever it may be.

JB, thanks for this. Such happy-making news! :)

@ 8 - cranky - you're not the only one who thinks Madam Tussaud.

I like Gong Yoo a lot, but I don't like his make up in these pictures. His make up makes him look like a wax figure - too thick, too white, too unnatural. The only picture that comes across as little bit natural is the second to the last pic.

I say Gong Yoo, tell your make up artist to lay off the make up.

Superman like---- hahaha so true. He just need that curly thing on his forehead, and tada! Asian Superman! :D

i've never used "stunning" to describe a man ... but in this case GONG YOO IS STUNNING!!!

i think you've mentioned this before ... but something about going into the army for these men just makes them 10000000x more appealing. is that even possible?

With or without Yoo...

thanks for such a wonderful wake up present! and i love his dorky/cheesy grin in the first pic. : DDDD

and lol @samsooki. nice one.

i've been in general k-ent fandom long enough now to see people come back from the military.. this is new for me. i don't know what i've done these past 2 years?? -sigh-

I love him I was wondering where he went to good to know he is back!!!

Despite the terrible make-up, I think he looks so much better than when he first went to Military service. Why is it that most men (okay, Korean actors) look better (and hotter, sexier, cuter, more fresh, manlier... I could go on and on...) after they have served in the military? I guess their temporary disappearance on tv accounts for that too, so fans would miss them more.

just when i thought there were no further cool ways for korean men to wear their scarves...

The gorgeous man is back with his killer smile! Welcome back, Yoo-sshi! I missed you.

@ #12 kippy - please, continue using that word for gong yoo. i was trying to find a word to describe him and "STUNNING" is perfect.

i can't wait for his first film (small/big screen) to be shown!!!

I miss this man. I heard he will play the lead character/robot in "Absolute Boyfriend?"

he looks too clean. haha.

His skin looks so smooth...I'm so envious!

I hope he stars in a new drama soon. I miss the guy.

this is my fav gong yoo clip

I was dreading about another Monday til I came to Dramabeans....
GOOD MORNING to me....*****SWOONS***
Thank you, JB for such a wonderful way to start the week.
YOO light up my life....Yoo bring me hope.....(ok, now I just dated myself :( hehe

oh, golly! how i missed this man! his smile makes my heart go flutter!!!
thank you for this post, Javabeans!!!
it's barely lunchtime, and i think my day is already complete because of this!!!

Why people look better after army service? Becuase under those shirts there is pure muscle and manliness.

I absolutely adore Gong Yoo, he is one of my favorite actors period, no matter what country. He was sexy as hell in "S Diary", and SOOOOOOOOO wonderful in "Coffee Prince", but having his hair that way makes him look MUCH older than he really is, at first glance I thought, "who is that 40 year-old man who resembles Gong Yoo?".

ALSO, his smile looks really unnatural, and his eyes look glassy like he has been smoking weed. I DON'T think he smokes marijuana, (and I wouldn't care if he did; but that's a cultural thing of course, weed just isn't a big deal here in the U.S., even politicians who SWEAR they never smoked and will do ANYTHING to keep it illegal, later turn out to have smoked marijuana as well,) he just LOOKS like he did. It breaks my heart to agree with the wax-figure comments, but it is true!

i'm gonna have to disagree with you.. i think Yoo's smile is so bright, infectious, and completely natural looking.. his eyes actually twinkle!!! that's the smile from his lips reaching up to his eyes. it's beautiful!!!

Ohhhh i love his hair looks gawgus all ways !!!

He is also one of my favorites. He's totally talented.

But really - - - these are not flattering pictures, especially the cover one. It can't be only me who is noticing this ???!?!?!?! The smile and eyes are not on the same page.... it almost looks like no one is home O_o

I was walking back to the office and thought of checking DB, and who do I see? Gah!!! I just had to stop on my tracks.

Despite makeup, he looks genuinely happy. I could wish for nothing more than that.

wow flawless skin .. what does he use?

i can't wait for his next project :)

Such a good looking man.
He should get cloned.

Ahh~ He's back and looking good.

agree with #33 elena - smile and eyes are not on the same page. he looks so unnaturally clean. too much make-up - maybe to cover up the imperfections? i would have preferred to see the imperfections rather than this wax-like gong yoo. two thumbs down, gong yoo....

NICE TO SEE HIM SO BACK after the miliary, yay! Oh He still looks so same ((from these his cheerful picture)) that its nothing change inside himself, how relief --- Very healthy and refreshing, heh!

maybe he's already practicing for his role in zettai kareshi. heard he's being considered for the role

I also agree with the wax figure comments - something looks really off about him here. Does he normally wear makeup? Star or no star, I think guys look better without makeup. More manly that way too haha.

I envy with his skin..

Welcome back Gong Yoo! Can't wait for your next project to be released!

Glad to see him BBBACCCCCKKKK...hoping for a great, first project!

he looks better than ever.