Jung Il-woo immerses himself in theater 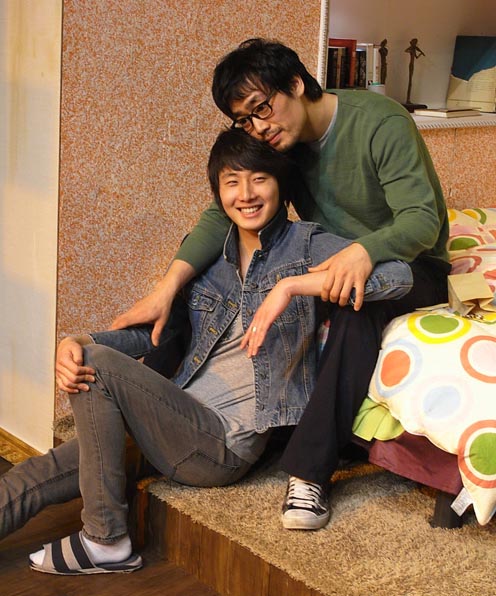 Jung Il-woo is currently acting in a small stage play in Seoul, Beautiful Sunday, which has earned him critical and popular favor. In it, he plays a gay man with AIDS, but despite that grim-sounding setup his character is described as bright and lovable. Jung recently gave an interview about his role, working in theater for the first time, and what he’s taking from the experience.

I’ll admit it was Jung’s adorable role as a broody teenager in Unstoppable High Kick that first caught my attention, but it wasn’t until a few years after that that I really grew to love him. He just seems so focused on the work itself that it’s clear he doesn’t care about the fame, which he admits was a little overwhelming post-Unstoppable High Kick, and is in this career for the work. In every interview I’ve read, he shows so much enthusiasm for learning and acting that I can’t help but admire his attitude.

(In fact, I suspect that his intense drive may sometimes get him into trouble — and not just physically, from overwork — because that level of commitment may actually lead to tunnel vision. And his frankness about his own weaknesses can sometimes make him talk TOO honestly, as with his confusion in My Fair Lady. I suspect that those who dislike him will hold these traits against him, while they just make me respect him all the more.)

“Standing on the theater stage feels fresh and new every single day. And my feelings and the audience’s responses are different each time… I feel the energy and thrill go through my entire body when I’m onstage.”

Actor Jung Il-woo has gone to Daehakro [Seoul theater district]. He throws his whole self into acting on the stage of a small theater seating just over 200. There, there is no “star” Jung Il-woo. There’s only the novice theater actor Jung Il-woo.

He is taking on his first theater challenge in the play Beautiful Sunday, taking the stage daily since February 4 with just over a month left. And he’s completely in love with the fun of acting on the stage.

“At first, it was awkward facing audiences, but now every day is a new experience. Every day, my feelings about my character are different, and so are my detailed emotions. There are also a lot of things I learn playing off the other actors.”

Debuting in MBC’s sitcom Unstoppable High Kick, he made unexpected choices as he shot off to do dramas Return of Iljimae and My Fair Lady. Currently on leave from Hanyang University’s theater and film department, Jung Il-woo decided to try theater through the recommendation of his advisor, professor Choi Hyung-in.

“I’ve wanted to do theater for a while, and professor Choi Hyung-in told me, ‘Now that you’re done with your dramas, try acting properly,’ and that it would definitely be different, rehearsing every single day. The timing was good after My Fair Lady ended, and I decided to strengthen my basics while I was resting between projects.”

The play Beautiful Sunday was produced by the theater company Hanyang Repertory in 2006, and received a lot of affection as a story about love and farewell revolving around a gay couple and a woman.

“Before I began this play, it’s true I did have a little bit of resistance toward gay people, and as I rehearsed this play, it completely disappeared. I was dark and heavy in my previous role, but I made this soft character with a bright image.”

In the roughly two hours he spends onstage, Jung Il-woo shows a variety of sides. At first endlessly lovable, his emotions explode in a scene where his misery is palpable. He even offers fan service for all the noonas in the audience with a topless scene.

“The topless scene? To be honest, at first I felt the pressure and wondered if it was even necessary, but the director and actors said, ‘You have to do it no matter what.’ I play an AIDS patient, so I couldn’t work out. I don’t eat much dinner though. [Laughs.]”

For his stage turn, he is receiving praise for his rapid improvements. He has improved his vocalization, with which he’d been dissatisfied, and his enunciation has become distinct. The way he expresses his emotions has become more natural. It’s through theater that he’s properly studying acting.

“To be honest, up through Iljimae I felt that I was doing okay with my acting, but with My Fair Lady I felt like that all went down the drain. [Laughs] After doing this play, I feel that it’s a definite help to my acting. Dramas have their own strengths, but getting partial scripts or one at a time limits how much detail you can delve into with a character, and you’re busy just reading the script. On the other hand, a play’s script is ready in advance, and you can adjust to your co-stars and the audience, so it’s a little more comfortable. I’ve also learned new ways to control my emotions.”

Jung Il-woo expressed his desire to return to television screens when he’s done with the play.

“I don’t know what genre it’ll be, but I’d like to try a soft character who’s my age. I haven’t done bright roles after High Kick, so I want to show a bright side to myself this time. A transformation? I think I can try that in the latter half of my twenties. I’m not impatient about that.”

Having cast off his compulsiveness and impatience toward acting, one could sense a calmness about Jung Il-woo.

He is so adorable and so talented, I just love him to death. If I were Korean and had a daughter I'd be scheming like mad to get him for a son-in-law. Since that's not the case, guess I'll give him a permanent spot in the ICOMYM Club and just follow him from role to role. Wish we could see this play online, it sounds really good.

Oh what I wouldn't do to be in Seoul these days and see this play! I wish tptb would release a dvd with a recording of one of performances onstage. That'd be wonderful.

I really like him and his acting and I love his honesty. He was so intense in Return of Iljimae!

Best wishes to this very fine actor! Being on stage is really different....live audience and you learn to "project" your voice.

I have a feeling he will become an even better actor!

I loved him as Iljimae and now I love his passion for his work..:)

omo. he's getting cuter!!!!
hope to see him star in a drama which he can act as a upbeat character!

he mentioned in happy together that he was lee min ho's friend even before being famous. i think it's cute that they are both playing gay men at the same time. haha

It looks so cute!
It also looks depressing.
:[

hmm....jung il-woo and lee min-ho playing gay guy respectively....arent' they good friends! i dunno why, but i like jung il-woo than lee min-ho. still they're such cuties! ^^

I've no idea about the interest of theater in Korea as a foreigner. I've a weird feeling (it may not be true) that many actors don't prefer to act on stage. Am I wrong?

@ muge: actually I've always heard actors say they prefer the stage because it allows them to connect with their audience, whereas on screen they have to do all their emoting through a camera lens. On stage you can also see the reaction of the audience to your performance and use that to make adjustments, whereas on screen you're kind of in the dark as to how the audience is going to view you.

And I had no idea he was the kid in High Kick! Of course I only saw a few eps of that. He sure is a cutie though, and seems to really take his job seriously.

i personally think his acting is really great
and his choices in films really stands out (well.....besides my fair lady)
illjimae definitely was a great choice but too bad people nowadays like to go
with films that are in the fad

i hope him much luck!!

Thank you much for a Jung Il-woo update! :)

i've just in love with him recently hahhaha..
now i am downloading highkick!!.
amongst 86-89 born actor he is my fave
Jung Il woo

I adore him so much. Can't wait for his next drama!!

Is it just me or does someone else here thinks that he looks a bit like the lead guy on ATASHINCHI NO DANSHI?...

I wish I could see this in real life. I bet it would be awe-inspiring!

@langdon813
Don't worry,since I have 2 daughters,I will "MINE"him for my son in law,hehe....
I'm soooo glad that his hair is back to Mane of Glory instead of the LEGO hair,another insults besides the POOR character writing (for him) from MFL PD

ohhhh he is so gorgeous, and it sounds like he's matured a lot more in the course of doing this play! Kudos, Il Woo! i'd love to watch his play but pity i won't be heading to korea anytime soon :( looking forward to his next role!

yep, he's even cuter!!
he did mention in an interview with Showbiz Extra that its a coincidence that both he and his best bud MinHo are playing gay roles..wish them all the luck though..i know they can pull it off.. :)

LOL, after MFL, that all went down the drain?? True, but too blunt, too blunt.

Jeong Il woo is one of the few who got extraordinary charisma in front of camera.He poses stunningly,he register fascinately.two thumbs up for him!!!;)