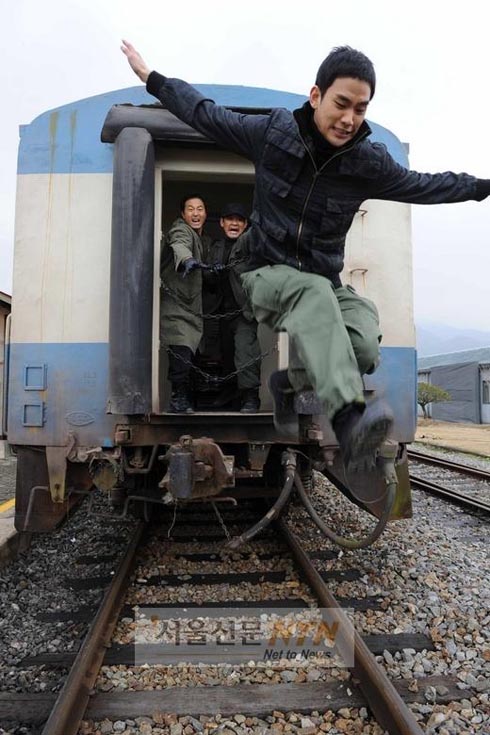 Aw man, now I may have to actually watch Giant. The drama that stars Lee Beom-soo and unfolds around the economic and urban growth of the 1970s hasn’t really tickled my interest, but I DO have a lot of interest in watching the growing career of Kim Soo-hyun, the rising actor who recently caught viewers’ eyes in Will It Snow For Christmas and the two-episode special Father’s House.

(Does anyone else think these new Giant stills strongly recall an East of Eden vibe? Especially the above shot, which reminds me of a similar scene with Kim Bum in an early Eden episode…)

Kim Soo-hyun plays Sung-mo, an eldest son whose adult role will be played by Lee Beom-soo. When his father dies at the hands of two men (played by Lee Deok-hwa, Jung Bo-seok), this sends his family — comprised of his mother and younger siblings — on the run to evade them. They are chased by civilian employees of the military, and Sung-mo jumps from a train to save them from being caught and acts as a distraction.

Asked about filming the tough train scene, Kim laughed and said, “Maybe it’s because I’m young, but I didn’t feel that it was too tough.”

Giant will premiere in mid-May.

I'm looking forward to seeing how his future unfolds. I loved him in Will It Snow For Christmas!

Maybe it's because I'm watching Gossip Girl right now, but something about him reminds me of Penn Badgley.

yes yes, i totally agree... I have the same impression that it looks like Kim Bum in Eden to me!

in the third pic, doesn't the mother holding an LV handbag?
^^
Lee beom soo: minus some interest points
Kim Soo-Hyun: plus some
and I really want to see how KMM will be after hits.

I meant: "isn't the mother..."
IE doesn't allow me to edit my comment.

No, it's not an LV. It's similar to Burberry's style, but is really just a plain checkered bag.

I'm hoping he's in more than 2 episodes like in WISFC. I really think that Kim Soo-hyun is a good actor for his age and would love for him to get a starring role ina drama.

Oh snap!
''Aw man, now I may have to actually watch Giant.''
That's EXACTLY what I thought when I read the title.

this is so East of Eden!
lol!
when will they give him an actual lead role without always being the "younger" version of so-and-so

I read somewhere Nam Ji Hyun (yes, the same girl in WISFC and young Deokman in QSD) was also casted for this drama. I hope it's true! She's my fave child actress at the moment.

Yeah, when would he get a bigger role than being someone's younger version ? I think he's due, right ?

Fling those doors wide open for Kim SooHyun! He definitely impressed me in WISTC. His comments seem humble and just. I surely hope not to find him get his ballooning attitude deflated, or worst, popped, in any way.

KIM SOO-HYUN!!!... lol totally know what you mean when you say now you have to watch Giant. I may just end up doing what I did for WISFC - watch the episodes with KSH, and a couple after to see how the 'adult' version turns out.

Y'know, the boy isn't exactly young so I do wish they'd give him a proper adult role. I mean, he's like, 22. I mean, if JGS can pull it off, I'm sure he can too. They've both got the acting chops for it.

@ ella
yeah i think Nam Ji Hyun is in this as well
that's good, hope she'll have scenes with Kim Soo-hyun, it'd be like childhood WISFC part II :)

I'm sure it's been mentioned before, but don't you think they might be purposefully going for an East of Eden vibe with East of Eden and Giant both being James Dean movies? They'll bust out Rebel Without A Cause next.

is it me or does this kid rock every hairstyle possible ?