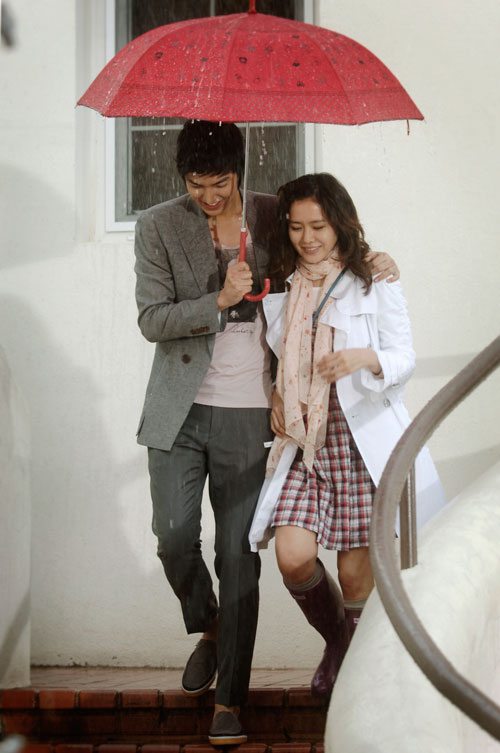 How cute are they?

Lee Min-ho and Sohn Ye-jin sure are looking sweet and cozy in these latest images from MBC’s upcoming romantic comedy series Personal Taste. These photos are taken from the shooting location at Kyunggi-do’s “Petite France” (which used to be the shooting grounds for Beethoven Virus) and are described as a “date,” but we know there’s got to be a catch since her Kae-in character believes his Jin-ho is gay. As soon as filming began, spectators recognized the couple, then gathered around and cheered in excitement.

The drama began its first shoots on February 28 following an overnight retreat attended by the main cast and production team as a working trip and bonding event. (Attendees: Sohn Ye-jin and Lee Min-ho, of course, as well as Kim Ji-suk, Wang Ji-hye, Jung Sung-hwa, and the rest.) On February 24, the group shot the drama’s titles in the morning and then headed to Pocheon by dinnertime. Afterward, the actors, director, and writer gathered round for a script discussion and rehearsal. Following that, the participants loosened up the atmosphere with some drinks and levity late into the night. (Lee Min-ho is reportedly a weak drinker, but stuck around through the end.)

And the excitement just keeps growing…

It's going to be so great to see LMH with a leading lady I love after the debacle of BBF.

they have chemistry...but its so obvious - the age gap between the two

LMH has a bigger upper body than lower (did anyone else notice his nice legs in BOF?) and those pants don't really help... I'm going to sound like a freak here, but I distinctly remember the scene in BOF outside of the school pool where he was wearing these white shorts and I couldn't help but notice how nice his legs looked in them... I don't have a leg fetish alright?!?! It's just that it's rare to see men with nice legs... hehehehe~ :) I'm going to shut up now.

GAH - ALL THE DRAMAS ARE PILING UP AROUND ME!!! SOUNDS LIKE A MARATHON!!! during spring break

There goes the flood pants again; at least it was raining (first 2 pictures)...hehehe.

..I'll be looking out for this drama..not so much for LMH, but because SHJ is my fave KActress!!! Seen All her projects & she's never chosen a bad role!!! Nice to see her all dolled up & playing an upbeat character, this time!!!

i luv sohn ye jin in her past projects so this one remains to be seen as i believe this must be her first romance/comedy? anyway, i look f/ward to watching this one in spite of their age gap! she's my no. 1 Kor actress!

Is there a sudden trend of nearly short pants? i see even Lee Min Ho's pants got some problem! above the ankle!

i'm excited about cinderella's sister, but this is the drama that i am reeeally really looking forward to. they look so natural together don't they? i hope the chemistry in the photos is visible on screen. can't wait!!!

I like those kind of umbrellas, as in BOF when Jan-di used her own umbrella to protect Ji-hoo's violin from the wet snow, are too cute.

I'm getting tired of seeing those (snag run accent) whatchamacallit (guy) sweaters; I do get fashion nightmares from all those You're Beautiful moments. I keep telling myself, "yikes, it'll pass and will soon be all over." The average person who has any snagged sweaters now can reform their sweaters to this short trend.

These two have really bright smiles, and I simply love that.

So many good dramas coming our way!! I can't wait to catch this one too...they are both looking so cute together :)

they looked good together, eh.. a lot has been looking forward for this drama, and that includes me.. kekeke

Yay! They look adorable together 8|

They sure look adorable and cozy together. I have been trying to suppress my excitement but seeing them in these stills....Gah!!!!Can't wait till March anymore LOL
I am keeping my fingers crossed that it doesn't disappoint me like BOF did.

I loved Ye- Jin in the movie "My wife got married" I am so looking forward to this drama and your recaps !

*Sigh... when will south korea stop making such inticing dramas!!! I can't ignore my life and school any longer! LOL

lol javabeans!! did you see the videos with siwon & chaerim yet?? THEY ARE SO SKINSHIPPY!

Yay! Cant wait to see two of my favorites in their new drama. They certainly look good together in these pics. All the best.

Lee Min ho captivated me in BBF. I admire Son Ye jin for her beauty & talent.

Eh? I don't see you writing about his pants. Hehe
I guess it's the trend at the moment then.

the script better be good or it will get uncomfortable. Very good actors.

Actually if you live around new york these "short pants" are kind of in style. And its not that they are short, Min Ho is just not wearing socks.

I will watch just to see Lee Min Ho!!!!!
I wish he'd get together in real life w/ Gu Hye Sun. But she's so uptight; she needs to loosen up a bit.

#28 peachy2sleep: I think so, because she's part of the Hallyu wave (but don't listen to me, I'm not Korean).

#3 moonriver: They really do have chemistry, which is what a rom-com show needs. As for the age gap, that was the plan because as JB says, there is an age gap between them. So good to know that people can notice it (I can't, because I've already known these two actors before this. but pfft, who am I kidding? who doesn't know Lee Min Ho and Son Ye Jin?)

JB: If you keep posting news about this drama, it'll make me more excited. And when I do get excited, the expectations keep growing, and anticipation keeps rising. But dayum, I cannot wait for this show.

okay, someone has GOT to tell me if these pants-that-don't-quite-reach-the-bottom thingies are going to be sticking around, coz i have to PACK and like-- leave EARTH and stuff. yunno. O_o

and i think those not-so-long pants are gona stick around for a while, even the lead in the other drama (man called god) uses it..hmm..gota give it to the stylists for a trend..

Ohhhhhhh, They look good. After falling in love with Still, Marry me.... I am more exicited about this drama.... I was one of those few people who did not like BBF, but boy... these boys are charming. Kim Joon was my Fav, i wonder what will his next project be, I woundn't mind another noona love ..

Now i want a young BF too.. LOL

@31 I totally agree! I'd like to fast forward to when this trend dies a horrid death so we can go back to normal-ness. :(!
And yea what is up with the sweater?! Why do people even pay for clothes with holes in them?!

But they do look cute! Another light drama to brighten my day and keep me away from the books!

I think they have their own chemistry despite their age gap, may be i still looking forward this drama though my priority is oh my lady................

another hottie in not so hot short pants, SIG pulls it off better...but this trend needs to be banned from its existence...#34, i agree, it deserves the most horrible death possible.
and the babie blue stripey cardigan is gross..it doesn't even make him look gay, he look like a grandmama that just got mawled by racoon.
SYJ style is not any better.
PT stylist has horrible taste, the only cute thing from the pics are the red umbrella and the couple chemistry.

Oh my... I like the last picture. Well, personally I don't really like the big age gap difference relationship thing. I only can tolerate it for no longer than -/+ 6-8 years difference. Unless they're already in their 40/50s, that hardly matter anymore.
And yes, they both look so cute. I don't think I can see their age gap difference though. All I see is like they're like enjoying their companion a lot. I'm so excited for this drama. 4 more weeks. That's so damn long...*sigh*

I have high expectation for this drama. Just like my most fave drama coffee prince. Hopely LMH and SYJ build the strong chemestry...like Gong Yoo n Yoon Eun Hye..cant wait..

pans are better but what happen with his second shirt?
anyway, I have good feeling about this drama. :D

Ditto - of all the SYJ dramas and movies that I've seen. She has always managed to pick up role that is interesting and she can deliver, including the underrated Spotlight which I truly enjoy despite the lack of a romance (which I fully understand to be a BIG disappointment for SYJ and JJH fans).

Really, really looking forward to this one.

thank you for this news . i am very waiting for lee min ho new series

tank you very much

they're so cute together..i really cant imagine LMH acting as a gay! :)

This is looking good! I can't remember how long rom com can take my heart.
I hope Personal taste will do.

They look great together :)

i really, really hope that this drama does not disappoint.

I think the shorter slacks are a rerun trend. My mother couldn't stand it 10-15 years ago when I visited home with a pair. "They're too short!" But I can't remember if guys were wearing them back then. My brother keeps telling me that "proper" slacks should have a "break" at the front of your shoe -- I forget how many inches he said -- so he must be seeing them on the college kids (he works at a university). The only trend I'm sick of is all the scarfs.

Ahhh I want to watch this so much! :D

Actually kinda remind me of Carrie & Stanford and except that Sohn Ye Jin character is not a sex columnist and Standford is actually really gay...

But I love girls with gay bff stories... always awesome... can't wait to see this and they are so cute!

I think short/shrunken pants lenght trend is here to stay...

Oh man. I'm getting happier and happier that Personal Taste is coming on screen. It looks adorable and it's more Lee Min-ho. Love that boy!

Just seeing these two shots you can tell the drama is going to be hot! They are so into it -