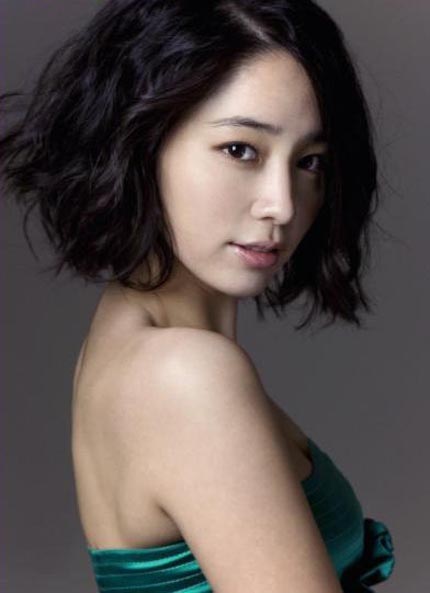 This is news I like: Lee Min-jung will be taking the part of Uhm Tae-woong‘s love interest in the upcoming movie Cyrano. (While the production has announced her casting as all but done, her management hedged a bit more carefully, explaining that they are looking favorably on the role but haven’t signed contracts yet. Based on how these things usually go, it sounds like she’s in.)

The film is based on the famous story of the witty, large-nosed Frenchman who plays Cupid for a couple, writing love letters for a man who lacks the courage to approach the object of his affections. The woman falls for the man’s romantic words, not knowing that Cyrano — who has also fallen in love with her but believes himself too ugly for her — actually wrote them.

Although the original story isn’t expressly a comedy, this version takes the form of a romantic comedy and comes from director Kim Hyun-seok (When Romance Meets Destiny). The third leg of the love triangle hasn’t been finalized, but discussions are currently in progress with one of High Kick Through the Roof‘s breakout stars, Daniel Choi.

Lee Min-jung got her big break playing the friendly fiancee in 2009’s Boys Before Flowers, solidified her status as a rising star in the family drama Smile, and has had a few roles in films like Penthouse Elephant and Into the White Night. This is, however, her first lead film role.

I will be looking forward to this! :)

Ooooh I was already looking forward to Cyrano, since it's one of my favourite plays of all time, BUT LEE MIN-JUNG?!? Man, I'm IN! Can't wait! I love her and I can't wait for the entire cast list to be finalized - this is going to be EPIC.

May I just divert the conversation for a moment to say, THIS is how I wanted my hair to look when it was short and permed. BUT IT DIDN'T. *sob*

@3 javabeans- that's horrible! I hope it didn't turn out TOO bad and that there is a way to hide it until it grows out.

congrats to Lee Min-jung! totally looking forward to it!

*Squeals* I love Lee Min Jung! She's so amazingly talented and charming. Now I might have to watch the movie... except I don't know where one usually watches Korean movies with English subtitles... whatever, this totally made my day.

@jb I think we all have horror stories of perms gone awry. I sincerely sympathize.

Yay, something else with Lee Min-Jung and I like Uhm Tae-Woong so this should be good. I'm not sure how they're going to do this play as a comedy, but I believe it will work out. Sorry about your hair javabeans.

She looks gorgeous in this photo! (I feel your pain javabeans. I too have ATTEMPTED the above look with no success).
Anyway, this is so exciting! Lee Min Jung is one of the few actresses I love and admire unreservedly, and Uhm Tae Woong is just the best! He was the only reason I was able to tolerate 4 episodes of Sassy Girl Chunhyang.
Yay Lee Min Jung!

(She seems to have the double eyebrow problem going on, mine grow like that, almost in two separate directions, *beep*!)

lol @ all the perm commiseration. the hair actually came in cute, it just wasn't what i was initially looking for and definitely not like the picture i took in. heh.

She's so pretty in that pic!

I really liked her in BBF, am loving her in Smile, You, and will definitely watch Cyrano when it comes available subbed.

Hey JB,
I have been meaning to ask this for a WHILE, Is there a diffrence btn actors who act in Movies v. actors in tv. In my country there is a HUGE difference btn the way they are treated. Tv stars as a member of the family n movie stars as GODS. IS there such a divide in the Korean entertainment industry? AND superstars seldom act in Tv dramas.

I have to watch this! She's my girl crush :)

Woow,, I cut my hair to look like her too,, I did get similar look:), but i didnt get perm so I only do like this once in a while, I think it's her best hair style.. and I also really like her! Smile You is wrapping up this weekend, gonna miss her until the movie!

She rocks with short hair. Long hair makes her look generic. It's been such a pleasure watching her in SY tho in the last 10 episodes she got all cute and precious and I was turned off. Maybe it's because it's my first long drama.
But she's someone to watch out for. Beautiful, talented and charismatic. She's going to be huge star soon.

I would say she's a great pick for such a storyline! I really enjoyed reading the original play (translated into English, of course!) so I hope they execute this one well :)

Oh! I am totally on board with this! I love, love, LOVE her! She's totally on my "Korean girl crush" list!

And I can totally sympathize w/perms gone awry....I had one in college that made me look like a poodle....can we say NOT the look I was going for? *lol*

WOW! Their taking the story straight from the French play Cyrano de Bergerac minus the time period (that play was like in the 1800s)!!!! I loved that play... I wonder how it will turn out? I think the characters are good, this is definitely on my watch list!

WOW Cyrano turn into Rom-Com movie??? Absolutely cant wait to watch this...
Its good to see LMJ after Smile,You over this weekend...

@3 JB, oh the last time I got a perm and wanted to cut my hair short like that, the hairdresser looked at me as though I was deranged and was all like, "THEN WHY DO YOU WANT TO PERM YOUR HAIR?" ....so everytime I try to perm my hair and cut it short, NONE of my hairdressers will ever let me. Which has led me to the conclusion that I am not destined for such a glorious cut. Sigh. LOL.

So Uhm Tae Woong will play Cyrano? I wonder what the production will do to him - big nose at all?

EEEEE!!! Best korean entertainment news I've heard in a while.

I love Lee Min Jung..... Not just another pretty face....
And Daniel Choi???? Woots sure gonna watch this..

She looks a little like YEH (when she had short hair) in that photo, esp. around the lips and chin.

squeeeee (a first for an actress!) :)

smile you is ending soon so i'm glad to see her pick up her next project already.

WOW its a really great surprise for me... I love LMJ since BOF, and now with Smile,U ending, cant wait for this to be release...