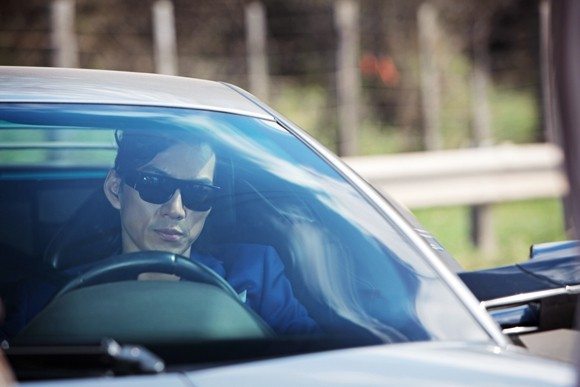 More stills are out of MBC’s A Man Called God (actually, two different sets), which premieres this upcoming weekend. The first set of shots features lead star Song Il-kook in action playing Kang-ta, chasing down a man named James with whom he’d once worked in the past. In a Lamborghini! I know nothing about fancy cars, but damn if that ain’t a pretty one.

James is a weapons trafficker in the Middle East, and Kang-ta approaches him for information on his enemy. The description says “approaches,” but it looks more like a beatdown. This scene was shot on a road near a beach in Yokohama, Japan, and had both vehicles (the other is a limousine) racing along at high speeds.

The second set of stills showcases a kiss scene between Song and Yoo In-young, which will appear in Sunday’s Episode 2. Yoo who plays Jang-mi, the daughter of Kang-ta’s enemy whom he is tracking down in order to avenge his parents’ deaths. Thus Kang-ta approaches her purposely to get more information on his target, rescuing her from the attentions of a violent man. She’s attracted to him and initiates the kiss.

(I don’t really like the clothing — and why are Song’s pants always too short? — but I have to admit that I’m starting to appreciate the hairstyle. Yeah, it’s over-the-top, sorta retro — it’s like a New Wave Duckie! — and a little ridiculous, but that’s also its appeal. I have a feeling that this drama’s success is going to be dependent on getting the right tone: Hit the right mix of action and fun bravado, and it could be entertaining. Go too far or not far enough and it could be a bore.)

I first read that KANGTA prince in this drama but actually that is the name for Song Il Gook.

ooohhh.. hot car! but what's with the hair?

I really can't follow fashion in this drama. wth did you do to my Il Kook's hair? TT

I have always liked a rock-a-billy pompadour and do like mod slim short suits but there is something is not quite right about the styling... maybe it is the Sonny Crockett Miami Vice blue and white.
To pull off short pants like that it's gotta be a pretty clean look.

They better be going for comic book hero/ stylized action because otherwise I'm still back with Prince and the Revolution with this....oh, yeah, and Miami Vice thanks @4 melica - the 80s, they have returned!

but still major fug hair even in the x0s.

Damn. I wish I hadn't read that sentence about his pants being too short. Because that's ALL I noticed in the last picture.

Hee at the other Top Gear fans! It's never on enough for me :)

korean men love the curly perms and damn if they dont wear it well!!

aaaggghhh.. that hair! I highly recommend him to fire his hairstylist!

I LOVE the hair. And I'm totally serious. I will watch this just because of the hair!

finally, some eye candy for the guys here!

The hair does come from the comic. As for the pants, when I was a kid the too short pants just meant you grew. :)

And yes! I love Top Gear too!:) And if you haven't seen it, try to see the episode where the guys go caravaning. ( camping with a trailer) it's hysterical!:)

The hair's hilarious. This is the fluffiest i've ever seen of Song Il Gook

Hair... hmm... makes me thinks if a bird is gonna make it a home?
Other than that, yes he is totally rocking the 80s meets mod meets runway metrosexual model... Fierce style though...

Yoo In Young... pretty... mostly remember her in Likeable or Not where she was mostly high strung all the time... but can act...

The car is hot like omo...And hello Top Gear fans! *waves* My fav ep was the challenge to reach the London airport by different mode, by rail, by bicycle,by speedboat... and good old car and I believe the cyclist won... totally wow episode... Ok why am I talking about cars here... sorry sorry...

I actually don't mind the hair... Plus I think Song Il-kook has the edginess and attitude to rock the look. His father was a famous gangster for heaven's sake!
I like how Korean stylists actually try out new styles instead of what's "safe" and "pretty" (AKA BORING). I know it's based on a manhwa but how does this Kangta have so much time to spend curling his hair? On another note... Holy chiseled cheekbones Batman!

Wow, that's a good three inches vertical, I wonder how much Aqua Net the makeup department is going through each week.

I hope the environment is not harmed in the making of this drama. ;-)

And an FYI, with SIK's physique and height, he's also a prime candidate to play the other male lead in IRIS 2.

I still think he is way too thin! It really gets to me. Can't even look at the pictures. Aaargh!

Wow!! Love the car!
I hope SOG will have a few hairstyles in this drama.

LOL! Aqua Net! It's true, if your gonna have Big Hair, you must have truckloads of Aqua Net! ( runs to hide family photo albums) :)

at least the first two are hawaii shots. his look is surreal!

As for the hair, Song Il-Kook is portraying the mawah character as closely as possible. He looks great in any hairstyles.

He might be thin but very fit and built in a healthy way. Can't wait until March 06.

It's the Thom Browne flood pants trend. At least he's not wearing a Bermuda Suit. :D

interesting shots...The article says these were shot in Yokohama, Japan.. (overlooking Yokohama bay...) However, looking at these pictures it looks like this was taken in Hawaii. There is a place called Yokohama Bay in Hawaii...

Good catch, JAMen. The article does indeed say they were shot in Japan, but yours makes more sense. I wondered why they'd pick up and leave Hawaii to shoot in Japan, all of a sudden. Heh.

A New Wave Duckie! LOL That made my day!

Not liking the short pants at all.

I can't wait to see it! BUT....I also hate SIG's hair !!!!
I know they said that they will follow the manhwa as close as possible BUT IT DOESN'T MEAN THAT THEY SHOULD GIVE HIM AN OLD FASHION HAIRSTYLE....grrrrrr

EP 1 ratings will kill the competition.

omg JB, you are a woman of my own heart! love the 80s reference! although i think i am way more attracted to this Song Il-gook Duckie than John Cryer's Duckie.

hmm, mention of short pants (which I didn't notice at first), but no mention of the short dress (which i definitely noticed)???

The hair is sooooooooo distracting. I cant stop staring at it! 0_0

@23 JAMen - I think you're right. There was talk that one of the shooting scenes is in Yokohama Bay of Hawaii. Good catch!

Did someone shrink his pants or is he too tall for them? That is not sexy at all! WTH? LOL

Really good with the female castings. I love that all the female heights + heels are around Song Il-kook's height. Easier to kiss and stare loving into each other eyes. Hehe.

I don't know much about cars or care either, but that is one hot ass car! I could never afford even if I work a million years.

I can't wait for this gangsta/comic book hero(?),Miami Vice meets Batman) show to begin! Love the hairdo! It's distracting now,but when we get to see SIG's ripped bod,we'll soon forget that crazy hairdo! The look says it all,so I hope it is overtop and fun.

btw: that is Yokohama Bay in Hawaii (way outside the city of Honolulu). Pretty remote beach and probably why it was filmed there.

OMG! OMG! OMG! A Murcielago !
It's the most beautiful car ever. If this guy drives a Murcielago I'll watch. I can survive ugly hair, short pants and HCY. At least he's got great taste in cars.

Gosh, I am missing the old Jumong. He is way too skinny so it's actually a turn off for me...I liked him better when he had more meat even though he sure is fit and looking good.

I'm not use to seeing SIG like this! It's kind of weird to me.

I miss his Jumong days!

My goodness ! what KIND of hairstyle is that ! sissy and wearing a wig ! eeeeh !
Dae gil's hairstyle is more fashionable !!.

Men should NOT and never ever wear hanging pants - - awful!!!.

The car scene wasn't filmed in Japan, it was filmed at Yokohama Bay in Hawaii. It's a stretch of beach on the Waianae Coast on the west side of Oahu. I was an extra during the entire filming. The stunt driver actually crashed the Lambo and nearly drove off the cliff into the ocean.

I like his hair from the very begining but his short pan is kinda...ha ha funny

OMG.... What happened to his fashion, especially his pants in the last picture? Did they run out of fabric to make the pants a few inches longer?

i love the hair too..its just that it grabs all my attention! lol
the car is super hot, with him, it's hotness overload!

lol the hairstyle reminds me of Jerry Yan when he was in character as Domingsi aka Taiwanese Gu Jun-pyo in Meteor Garden. It was during the F4 craze and my friends and I called it pineapple hair, but we did it lovingly and Jerry totally rocked it!

crashed the Lambo?!? What a waste of a beautiful car! It's my favourite brand of car. From the stills released so far, I also prefer SIK with more meat on him. I will put up with that hair and pants as long as he maintains his standard of acting.