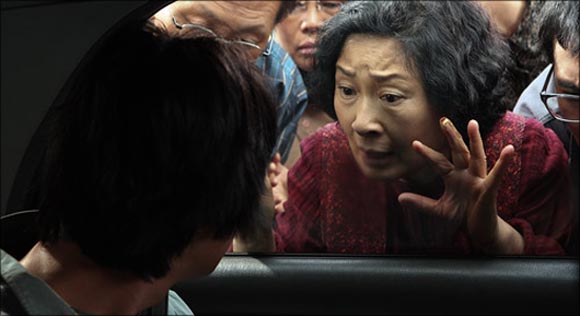 Director Bong Joon-ho‘s thriller Mother, starring Kim Hye-ja as a mother determined to clear her son (Won Bin) of murder charges, picked up three awards at the recent Asian Film Awards, among them Best Picture and Best Actress. Director Bong also won the award for Best Screenplay with co-writer Park Eun-kyo. The other Korean film to pick up an award was Park Chan-wook’s vampire horror-thriller Thirst, which won for Best Visual Effects.

The ceremony was held on March 22 in Hong Kong and handed out a total of 14 trophies. Full list of winners below.

Song Kang-ho and Won Bin were also nominated for acting awards for Thirst and Mother, respectively. Other Korean films that were nominated but did not win their categories included Breathless (Kim Kkot-bi for Best Actress) and A Brand New Life (child actress Kim Sae-ron for Newcomer). Su Ae’s The Sword With No Name was nominated for Costuming, Mother for Editing, Running Turtle for Composer, Thirst for Production Design and Cinematography, and Like You Know It All for Screenplay.

I am so happy for my favorite Korean director. Mother was amazing.

HAH. I'm amused that Amitabh Bachchan is the lone Indian on that list. He totally deserves that Lifetime Achievement Award, too. :)

I still haven't seen Mother. :( I keep meaning to, but I never get around to it. It looks like it'd make me cry buckets. ㅠ_____ㅠ

It will be shown in Internatinol Istanbul Film Festival there are some other Korean movies too . I am gonna watch it.

I have yet to see this film :(

I watched this with my friend last Friday! Thank goodness for NYC theatres :D This movie is so powerful about a mother who will do anything for her son. The performances are spectacular. I didn't know this was the same director of The Host so I was pleasantly surprised.

Lol at Amitabh Bachchan
adding more movies to watch list. which never seems to get shorter

I waited this long for the US release so I could finally see Won Bin on the big screen and it was worth the wait! I did enjoy the movie and Bin's character sort of reminded me of Leo in "What's Eating Gilbert Grape" (hottie playing mentally challenged). Both "omma" and "babo" did a great job.

GO SEE IT IN THE THEATRE!!!

Hehe.. i almost missed amitabh bachchan's name in that list...
its hardly any wonder that there aren't (m)any indians on the list ... they nominated deepika padukone for om shanti om and chandni chowk to china in 2006 and 2007 in the best actress award... did she even have a role in those films....

it's not going to make you cry....it's going to make you think...it has a twist of thriller and the mom is out looking for clues to clear his son...but in the end....lol...no spoilers on my side! you should see it, kim hye-ja was amazing in this movie and the director did an awesome job!

I remember seeing a review for this movie in Entertainment Weekly. ARGH. I really want to watch it, but there is no theater close where I live that is playing it. :(

Very well deserved - both the Director and Kim Hye-ja! It is one movie that hangs around in your mind long after it's over.

Happy for Mother and Kim Hye Ja! On a separate note, i'm happy for Nicholas Tse too as he totally deserved that Best Supporting Actor award! :)

Mother was definitely good
very surprising! i was impressed

it is strange that Asian Awards only represent China, Hongkong, Taiwan or Korea, Malaysia.

India by the far the biggest movie Industry in Asia or Perhaps the World to some extent, is highly underrepresented. The tag that Indian Movies are long is entirely deserved but I guess Asia, by which I mean China can't except the fact that Indian Movies are more widely appreciated and resemble the Asian Culture. But, now to the contrary Indian movies have become very International for the past decade and have shorter lengths. But, I guess China or the oroentals can't digest the fact that Indian movies sell more. So they like to spread false rumours about length and gain brownie points by talking about actors dancing around trees. That was the 80's and Hollywood also had the 60's with the fruity culture. I don't see orientals making fun of that, that has become a trend because white people do it. Hypocrites.

Its great that they have appreciated Amitabh Bachchan and Priyanka Chopra for Lifetime Achievement Awards. But when it comes to direction and film editing and technical expertise, Indian Film Industry is one of the best after Hollywood. But, yes Hongkong needs their own awards and are trying to promote the idea of oriental cinema. But, it has very little sell power. Hardly anyone sees there movies in the South Asian or South-East Asian Subcontinent or Middle east. The only reason I looked up this site was because I heard about Amitabh Bachchan getting an award.

Bruce Lee however is the legend. I loved him and I do love the kungfu brand of movies I love Chow Yun Fat, Jet Li is good. Jackie Chan is ok. I loved Chow Yun Fat and Bruce Lee. John Woo is by far my favorite action movie director. love the hidden dragon and crouching tiger. and some more movies, but I really like the old kungfu movies with shaolin temple and master and disciple stuff really nice. Monkey King etc....I think Hongkong should stick this kind of genre of movies which really speak to the masses and the fighting spirit of orientals....

I was walking through my local Blockbuster outlet and saw this movie... I didn't think twice and just grabbed it.. Although, i'm not a fan of thriller/mystery movies, I still gave it a try cause I'm a fan of Korean dramas/films.. and OH BOY! DO I NOT REGRET THIS!! The movie is so haunting and moving but it's so well acted and amazing that you just get sucked into watching it..