On set with the cast of Into the Gunfire 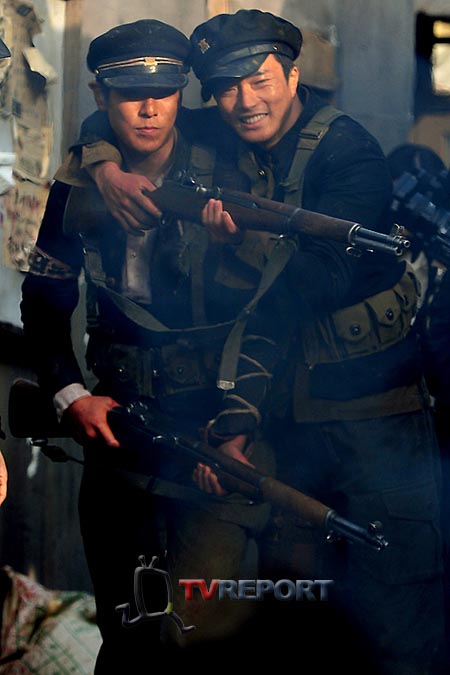 On March 19, the production of Korean War movie Into the Gunfire opened up its Gyeongsangnam-do (a southern province) set location to the media for a look behind the scenes and an informal press conference.

If you’ve missed the plot description in the previous posts, the gist is this: The film is set in August 1950, when North Korean troops invaded the South, and focuses around a group of 71 student soldiers who held their ground to fight back in a pivotal battle of the war.

Kwon Sang-woo and TOP are among those 71, while IRIS‘s Kim Seung-woo plays a South Korean lieutenant, and Cha Seung-won (of the IRIS sequel) portrays a North Korean military officer. (Into the Gunfire is produced by Taewon Entertainment, which produced IRIS and is planning the upcoming Athena.) The Woman Who Still Wants To Marry‘s Park Jin-hee also stars, although she is not pictured here.

The greatest difficulty for the actors in filming this movie, as with many projects shot this winter, has been the particularly cold weather. It doesn’t help that because the film takes place in August, the costumes and uniforms have been lightweight. Also, to achieve realistic appearances as hungry soldiers in wartime, the entire cast had to lose weight. Cha Seung-won, for instance, dropped 3 kg (and he’s an actor I’d have guessed didn’t have 3 kg to spare).

Kwon Sang-woo plays a young soldier who chooses to serve in the battlefield over juvenile detention, and clashes with TOP’s character. Kwon explained the difference between this project and his prior ones, saying that this has greater scope.

TOP said, “In war or training scenes, I tend to get injured frequently, but I’m giving it my all. Especially since I’m working with such outstanding sunbae actors, I feel like every day is a chance to learn a lot and progress.”

Into the Gunfire will release in movie theaters in June (which is also the same month that Korean War-themed drama Road No. 1 premieres on television).

Can't wait for this movie!!! I miss Jo Gook!!! CSW seems to be choosing villain roles lately...but I like him best in City Hall!!!

Thanks for the article, JB! I was curious if it was still called Into the Gunfire since I read somewhere before that they were changing the name.

I didn't know that they had to lose weight. It's funny, because I saw some bts photos of CSW before and it looked like he gained weight. :x haha.

Uh huh, Kwon Sang Woo as a juvenile deliquent - suuure... If I wasn't convinced in My Tutot Friend, I won't be convinced now. Still watching this though - CSW ^^

This looks like a block buster and I'm game!

Gookie back to playing toughie on the opposing team....but hey, movie is a movie and he's out to show us he can make that character come alive!

I am hmmmming at TOPS and Kwon Sang Woo.....guys, don't let us down!

LOL! I'm glad that I am not the only one who thought " Wow! They have juvenile detention for people in their 30's?"

did anyone else notice that all the actors mentioned are related to IRIS in some way...TOP and Kim Seung Woo were in IRIS 1, Kwon sng Woo was offered IRIS 2 and Cha Seung Won will be in IRIS 2...lol

how does TOP manage to look so adorable in all that grime?

and yikes cha seungwon! i hardly recognized him.

CSW!!! I wonder when it'll be available for us in the States? I mean, how long do I have to wait to watch it? Anyway, something else to look forward to!

Seriously, how does Sang Woo believe that anyone will buy him as one of the 71 STUDENTS?!?!?!?! Just look at the pic of him and TOP where they're smiling - his laugh lines are very prominent! Geez - face facts KSW, you're and adult.

I'm so excited! :D I love Kim Seung Woo and Cha Seung Won- two of my favorite actors right there. Does anyone notice how Kim Seung Woo plays all these military roles? Me likey. He might be old and married, but for some reason, I find him like really hot. Which might be disturbing on some levels. x]

Big fan of Big Bang, but not sure if TOP will be able to pull it off. Then again, I never watched Iris so I can't really talk about his acting skills. I remember reading one of javabeans' post that he still needed to work on his acting. Or at least I think I remember reading that. x]

And yay for Park Jin Hee! Been a fan of her from the very beginning, with Sweet Lie and Please Come Back Soon-Ae.

But like 13 mentioned, how is Kwon Sang Woo going to pull off a STUDENT look? I mean, I guess he looks younger than what he really is, but he still looks a lot older than a young student.

i want to watch it just for TOP love Big Bang! ;-)

cha seung won looks weirdly out of place with such a white uniform... he's taking the anti-hero roles to make us love him more - can't resist a bad boy... :)

Random: Why is TOP's teeth so white in a battlefield?

They should make KSW play an older role. Please. What happened to the Fate days or the Stairway to Heaven days or the Bad Love days, when he played...well, his age?

It's definitely a big chance for TOP, he works with big Stars!

I still say it looks like a miscasting but whatev.

it's definitely a great chance for T.O.P to work 2gether with such sunbaes. But i can't believe that ksw is taking the role of student who is the same age with T.O.P

my gosh.. i just finished watched this movie,, da' dvd was brougth last month n' i dont even, interested to watch it,,
I tried to stop cause im kind of bored,, but i played it again,,
i was amazed how they gone to be friend, n' i can't stop crying till da' last part! especialy da' last part i was NONE STOP CRYING
^0^! wonderful movie! i love those guys!