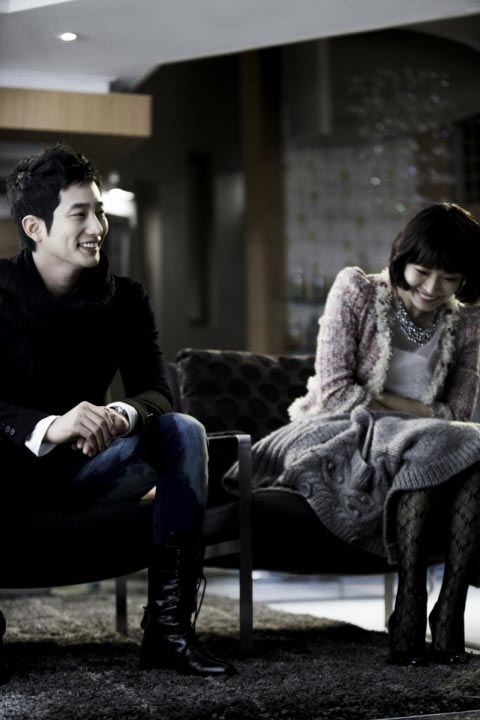 All the attention has been given to MBC’s Personal Taste and KBS’s Cinderella’s Sister, which will be Wednesday-Thursday rivals; now here’s a look at the third drama premiering on the same day, SBS’s upcoming Prosecutor Princess.

This is the vehicle for Kim So-yeon following her fantastic supporting role in last fall’s IRIS, and features Family Honor‘s Park Shi-hoo and Chuno‘s Han Jung-soo as her two love interests. The production recently held its first script rehearsal and began filming in Paju, Kyeonggi-do, on February 27.

Kim is Ma Hye-ri, a prosecutor without much sense of duty who prefers to go shopping, while Park plays cool lawyer Seo In-woo. The scene pictured below was one of the first to be filmed, and takes place as the two reconcile after a fight over a meal at a restaurant. On the morning of the shoot, breakfast and snacks were brought to the set by members of Park Shi-hoo’s fan cafe and DC Inside gallery, who had mobilized to support their star.

In-woo is a character who swoops in to help Hye-ri whenever she’s facing danger, but whose true intentions remain hidden; he is described as “mysterious” and will make audiences wonder if he’s a bad guy (or at least a sneaky one) after all. Han Jung-soo’s top prosecutor character, Yoon Se-joon, fills out the love triangle. Choi Song-hyun and Yoo Gun also appear.

Prosecutor Princess will incorporate a good amount of legalspeak, but its PD assures viewers that the drama will focus more on keeping a bright and light vibe, rather than getting bogged down in heavy drama. The series will premiere on March 31.

Wheeee! Excited for this!
Couldn't recognise her in the first pic but she's looking lovely in the rest of the snaps. As are the male leads. *wit woo*

all these beautiful people...

"In-woo is a character who swoops in to help Hye-ri whenever she’s facing danger, but whose true intentions remain hidden; he is described as “mysterious” and will make audiences wonder if he’s a bad guy (or at least a sneaky one) after all"--> sort of reminds me a bit of Cha Seung Won's Jo Gook from City Hall. let's hope the character gets to be half as charismatic as Jo Gook!

oh my im excited..wed-thurs is fully loaded of interesting casts to watch out for..i love PSW!!!

chuno guy needs a haircut- he still looks like a slave chaser :)

I can't help it... all my attention was focused on Han Jung-soo in those pictures. He's delicioius. This should be an interesting drama and normally one I'd look forward to if I weren't so preoccupied by Personal Taste and Cinderella's Sister....

it never rains but it will pour

i'm actually not really watching anything these days, which is incredibly odd and rare for me (and absolutely GREAT for my schoolwork). but come end of march i'm gonna wanna watch ALL THREE hahaha oh dear

General Choi!!! what...there were other people there? Oh...why yes, this looks like it will be a fine show to watch. 8-)

this one seems more interesting than Personal Taste or Cinderalla's Sister. I'm torn (as if I cant just watch all three, hehe). i wish they all got decent ratings and no drama is left waaaayyy behind.

Hahah, I have NO idea how I'm going to keep up the pace with my kdramas if sooo many good dramas are released at once and keep coming.

The hair!!!! First kim so yeon's - its cuter when she tied it back up - and for han jung soo - I hope chuno is done before he films any of his scenes!! (It would be right??)

this is sooooo amazing. 2009 was such a dry year for dramas... but WOW... already there are soo many good ones. oteoke oteoke!
<3

“In-woo is a character who swoops in to help Hye-ri whenever she’s facing danger, but whose true intentions remain hidden; he is described as “mysterious” and will make audiences wonder if he’s a bad guy (or at least a sneaky one) after all”–> sort of reminds me a bit of Cha Seung Won’s Jo Gook from City Hall. let’s hope the character gets to be half as charismatic as Jo Gook!

My sentiment exactly! Many a time I find the synopsis/character description is killing a drama more than helping its cause by giving a storyline nowhere resembling what the drama/character is truly about. CH is the best example, together with many others, that pushes away than pulls in audience.

I have a feeling that history is repeating here which sort of heightens my interest in this drama now :). And it would be so nice to see Kim Seo-yon in a lead role. Her acting chop is indisputable but I cannot flick away her evil image in All about Eve as the most evil girl in Kdrama history. Hope this drama can rest that evil girl image in rest!

Gonna be tough fight for the Weds/Thurs drama.

Personally I think it will trail behind PT, but this drama have more hulky great body guys suited to my taste. LOL

the first image Park Shi-hoo looks so pale that it looks vampirish!! hehe

this is one drama i'm dying to watch....i mean there's also personal taste...not so sure about cinderella's sister....

but Prosecutor Princess is a must watch for me....

I had my first taste of a long family drama w/ Glory of the Family, w/c I loved because of PSH!!! He's serious character in the beginning but grows wacky towards the end, after falling in live w/ his lady & PSH played it all too well!!! Hope this drama, brings these out too,& w/ Kim So Yeon & Han Jung Soo....I can just imagine what sizzling chemistry they'll have on screen!!!

It would be so ironic if I ended up liking this drama the most out of the three....

i looking forward for this drama.....very interesting n for sure, i love kim so yeon.....