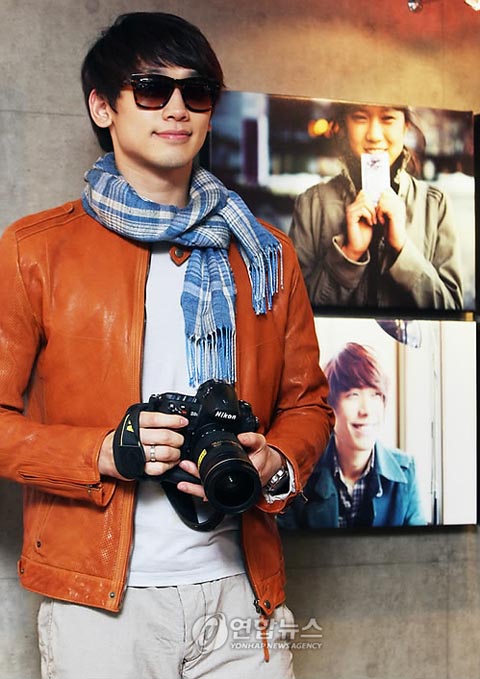 The next celebrity to take up photography is superstar Rain (aka Jung Ji-hoon), who just participated in a photography exhibit, “Jung Ji-hoon’s Reality.”

Rain’s exhibit takes the theme of “My Lovers” and runs from March 12 through 21, and features photos that he took of fans as well as photos that fans have taken of him. The exhibit is free and is displaying in Sinsadong, Seoul. A related auction was held on March 14.

In order to take the images on display, there were photo sessions at various locations in Seoul, such as in the Garosugil neighborhood and at Coex. Also included are photos shot at his concert location in Japan, as well as from his daily life.

At the auction on the 14th, Rain auctioned off a special package that included the camera he used, a Nikon D5000 kit with bundle lens, as well as signed CDs and a photo collection. Nikon Imaging Korea will donate the proceeds of the auction to the international humanitarian organization Good Neighbors.

first!!!! :D
rain truly is one of the most talented star of korea
rain oppa <3

@1, took the words right out of my mouth.
I also like the fact that he's been in some American movies. Spreading the Korean hotness.

@ Ena
i totally agree...rain was the very first artist i got to know about when i got interested in kpop...he is just pure awesomeness!!

This young man is one beautiful human being! He is sexy and doesn't flaunt it!

You go RAIN....you are PRICELESS!

What's with those pants?

so this must be rain actually tweeting. his comments seem to align with his reported activities. dude needs to get verified. i love to watch him dance . . .

@ 6 Moana.....he DOES need to verify because I understood that he doesn't know how to speak English? that was one of the controversy with him signing up with William Morrison Agency in Los Angeles....he can't speak English.

I wish Rain would do a drama again. I liked him best in a drama.

Does anyone know whether Rain needs to enlist yet, or has he already done his military service? I recall he's an 82er.

oooh the plot thickens! 'course if thats not him, no wonder he doesn't verify . . .

It's a fake. As much as I love Rain, his English isn't that good...and if you look in the top right hand corner, where he gives his name, it says 성지훈(Song Ji Hoon) instead of 정지훈(Jong Ji Hoon) and I'm sure the real rain would NOT get his own name wrong. The fact that it is so up to date with what's going on in his own life doesn't mean much...Because as we've seen time and time again...Korean fans are obsessive and dedicated to their "idols".

Hey, it's my first Inappropriate Crush boy! Ah, he's so fine. I miss his long hair though. :-(

I think Rain speaks English fairly well now. As for tweeting in English...who knows? I'd like to think that's him but for some reason I'm skeptical. But following anyway, just in case. :-D

Nice article, great cause, VERY nice pics (even with the pants :-D )!

He's already beyond korean celebrity. he's really different and he has a real star shine! mucx =)

just got the NYTimes spring men's fashion supplement -- dang if i didn't see some shorter pants hemmed or rolled up (e.g., page 64, 66) along with italian-style longer lengths. korean men ~~ whatever they are wearing is hot! even the ridiculous pants Geongang had to wear on Three Brothers (수상한 삼형제) when he was recovering from hemorrhoid surgery. ^^
http://tmagazine.blogs.nytimes.com/2010/03/09/how-low-can-you-go/

ooo he looks so yummy in that brown leather jacket.

Rain is truly an artist, what more can I say to this man, he is so talented, I can`t name one thing he cannot do. Love you rain, more power!

He's great and love that camera! You don't need to speak perfect English to succeed in life. Last time I checked, he's doing pretty well for himself.

That's great if he speaks passable English......all he needs to do is stand there and smile anyway! :-)

Thank you and okay are 2 passable words!

Yummy, Yummy! Rain is so good-looking. Love him.
Also I've been watching Full House again and I really wish he'd return soon with a new drama.

What a great idea for an event to give back to fans. He is really quite something.

Loved Rain in Full House but I never really got into his music for some reason. I still love him, if only for the fact that he produced MBLAQ, my current pedo-bait of choice. =P

@Kimmijoon89: Where is that picture? I went through all the pictures and reading the Korean, and the only one that mentions a name is in:

And his name is spelled correctly on there?

Which picture "on the right hand corner were you referring to?

I'm not sure about his photography skills, though I'm sure this is more because he endorses Nikon cameras, but I want to go -_-

"And his name is spelled correctly on there?"

His name IS spelled correctly there.

Eh, a D5000 bundle? Why not a D3? Nikon already has Ashton Kutcher plugging that D5000 camera, so what now, using Rain to help promote sales? Oops, I did it again.

anyone mind telling me what verison of the Nikon camera he's holding onto? it looks great. I was thinking of buying a camera and that one caught my eyes

argh i can't seem to appreciate this post-- i have to say first:

I have watched Rain speaking in English many times. His English is good, he can communiate very well with the English speaking people and I think he is a brave young man that he speaks the way as it is without fear of right or wrong. The most important is you can communicate with him anywhere. Colbert didn't comment on his English. What more do you want from him? Queen's English?

#29 @Elly, the issue isn't whether Rain's English is good or bad. The question (at least for me) was whether or not that's really Rain on twitter. his tweets seemed to line up with the info on the auction and showing but not with his English skills. that said, often one's spoken english and written english are two diff. things. hoping i didn't open another can of worms . . .

I was there. I liked some of his photos, especially the cute little boy who dresses like him :)

sorry peeps...somehow i just cant get myself to like him....found him rather annoying in full house act.....hmmmm but whateva as long as he is promoting k-pop/k-culture and selling it to the Americans/the world in general well tht should keep all of us happy i guess....

There's going to be an animated version of Full House!!!
Yey! I'm excited!
Heard Rain will do the dubbing. Don't know about SHG. Hope she will do it.
And MBLAQ will sing the OST. :)

@34. That's alright. I think there are many people like you. They are not really his fans but they do acknowledge what he has done and is doing for the Korean entertainment.
And to the person who asked about the military service, I think he's going to do it next year. He's going to be 29 this year (Koean calendar), so probably next year before he turns 30. :)

I'd say : He just needs to stand there and take off his clothes! hahaha

And yes, that is a fake twitter account. The real Rain secretly (J Tune did not divulge his flight details) went to China last week - this fake dude didn't mention China at all - because he didn't know! LOL.

I ADORE RAIN. I THINK HIS DANCING IS AMAZING. HIS SINGING IS GREAT, AND HIS ACTING IS ENDEARING. HE IS MULTI TALENTED AND SEEMS TO BE A VERY RARE PERSON. I WISH HE WOULD HAVE ANOTHER CONCERT IN NY OR NJ, THIS WAY PERHAPS I CAN ACTUALLY SEE HIM PERFORM LIVE. THAT WOULD BE GREAT.....

I LOVE YOU SO MUCH RAIN