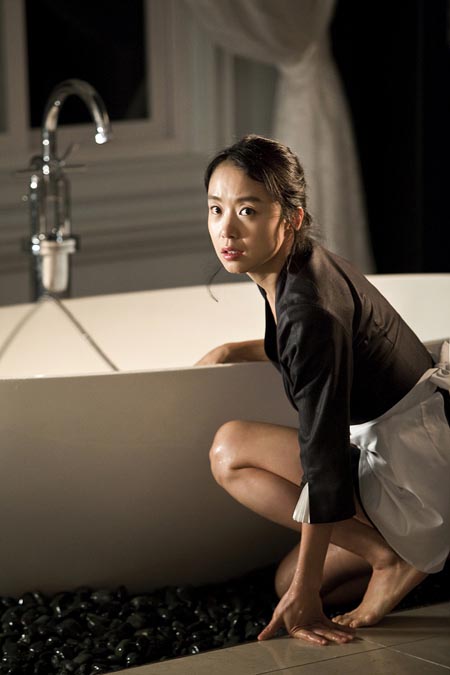 The anticipated remake of psychological thriller The Housemaid — starring Jeon Do-yeon, Lee Jung-jae, and Seo Woo — has wrapped production after three months of filming. It has also released a new set of four stills, which feature the three lead actors and veteran actress Yoon Yeo-jung.

Jeon added, “This was a big experience for me, and I tried a new challenge and made a new change because of director Im Sang-soo. I’m so thankful to Lee Jung-jae, with whom I always worked so well; Yoon Yeo-jung, whom I always miss; and our youngest, Seo Woo, who followed along very well in a difficult role.”

Lee Jung-jae, who finished shooting his part before Jeon, said, “I feel more attachment to this movie than any project in the past.” Yoon Yeo-jung said, “It was difficult physically, but I was really happy filming. I’m glad to be able to to act with Jeon Do-yeon.” Director Im said, “I could feel the delight coming from the actors as we worked. Jeon Do-yeon has put in a completely different performance than she’s shown till now, and I’m already looking forward to seeing it.”

The Housemaid is planned for a May theatrical release.

Via No Cut News

..the third lead cast (Seo Woo) look a bit like park SI Yeon...and on the other poster from Cinderella's she looked like honey lee...just blabbing....

Love the stills. I'm surprised they finished filming in three months; I thought movies would take much longer.

Looking forward to it!

There's something so sexy about Ms JDY's pose in the picture.

just caught the housemaid awhile back, and it was real good! the crazy things the housemaid did all had the theatre audience alternating between gasps of laughter and surprise since everything was horrifying and absurd. i have no clue as to how the modern remake would bear similarities to the original, although i sense the same sense of eventual doom seen from the stills above. - can't wait for it!

Was Yoon YeoJung in the original Housemaid as well, or was that a different movie..?

Anyway- I'm excited for this! I'm surprised it was filmed so quickly.. it still feels really recent from when I first heard Lee JungJae was casted!

Stills look great. Exactly what I'd ecpect for a thriller.
I watched the first half of paju last night and I think seo woo is extremely talented
It makes me very excited for this :)
(as well as her being able to stand up to MGY and CMJ in Cinderella unni)

I've always like her since Sec. Sunshine & this looks like a good one! ummhh can't wait & i luv that lead actor too. thnx JB

I have been excited about this movie ever since they announced that they will remake it.

This film looks really intriguing. But I'd have to say the beautiful looking bath tub in the top pic is most alluring, lol!

I don't know if this has been mentioned or not...

Anyone who wishes to watch original 1960 "the Housemaid" (BW / dir. Kim Ki Young) can watch in its entirety online via The Auteurs website (Thanks to Martin Scorsese and his efforts to restore world classic cinema)

thank you SO much for this. I want to see it before I see the new one. I had thought the original film was completely lost ~~ obviously i was mistaken. ;)

I actually just saw the original The Housemaid at the San Francisco Asian American Film Festival, they remastered it and was showing it to the public. Since it's got that whole sixties-esque drama to it, it was actually pretty humorous even though it was supposed to be a thriller .____.

The whole audience started laughing when they broke the 4th wall at the end lol. It was pretty makjang and ridiculous though it was stll a good movie :]

Check out the new teaser of the remake: http://www.youtube.com/watch?v=lMp8qQ0D7gM

The previews look interesting, The woman playing the housemaid is a good actress but she is NOT sexy or Pretty. She looks like a plain jane but I guess that is probably why the wife is going to go ballistic.

but somehow (to me), jeon do yeon just doesn't look seductive and sexy enough as compared to the housemaid in the original movie. don't you agree? she doesn't look dangerous and lustful in the first still; just, well...shocked.

Where is the house located in Housemaid. I would like to see more pics.