A look at KBS’s upcoming My Country Calls

Mondays and Tuesdays will soon be getting a new romantic comedy, My Country Calls, to replace Birth of the Rich. Several key leads play spies, but this’ll be a far cry from the action thrills of the IRIS franchise, and aims for a more comic bent.

Lee Soo-kyung plays a lowly, accident-prone officer who meets the elite agent played by Kim Sang-kyung, and the two become entangled in a series of comic events.

Lee’s character is described as a cross between a 21st-century Candy and Shim Chung — so, sigh, yet another iteration of that plucky commoner heroine, without a seeming twist to distinguish her from that trope. I do think this character suits Lee, though, who plays the comedic everywoman with a lot of cute charm. Clazziquai singer Horan plays another spy, a sleek and professional agent, while Lee’s recent co-star from Loving You A Thousand Times, Ryu Jin, also stars.

My Country Calls will premiere on May 10. 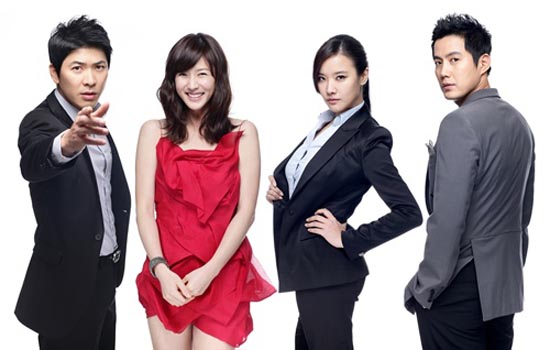 looking forward to it . thanks

Thanks JB !!
@ lb_tmi: The first I saw of Ryu Jin was in the War of the Roses. So many memories from back then and of Choi Jin Shil (RIP).

this reminds me of sweet spy...

Sweet Spy was the first thing that came to my mind also after reading the description. This looks cute though, so I look forward to checking it out :)

lee soo kyung looks really different from her soulmate days. did anyone like her last drama, loving you a thousand times? idk if i should start watching or not.

Loving You A Thousand Times was great! It had A LOT of angst/drama though, so if you don't want to be crying your eyes out by the 2nd episode, don't watch it. Even though I was a bit disappointed with Lee Soo Kyung's acting, her co-star, Jung Gyu Woon MORE than made up for it...:-)

Looking forward to this new drama...we'll see if I like LSK better in it.

Like Lee Soo Kyung in Soul Mate, "....in laws...," Lawyers of Korea... Loving you a Thousand Times (with that hunk Jung Gyu Woon), Horan--she seems like she can do anything....(part of that great group Classiquai--(whom I discovered through you JB), Kim Sang Kyung--and one of my great LOVES Ryu Jin.........I'm really, really , really looking forward to this...

Sweet Spy was definitely the first thing that popped into my mind. Only saw a couple of episodes of that drama, since it didn't really grab and hold onto my attention & interest. Hopefully, this will be more entertaining. I really do like Lee Soo-kyung, especially when she plays these down-to-earth yet funny/quirky characters.

Hmmmm....did we not do this already? oh, thanks Kaedejun & amy, it was "sweet spy"

omg, I remember war of the roses. That was one of the first kdramas I saw Ryu jin in. If anyone knows where I can watch it, please share :)

I love both LSK and RJ but didn't watch their previous drama cos I'm just not a angst drama type. So I'm really happy to see them in a lighter drama again so soon.

Loving You 1000 times... was depressing . I like LSK better when she's playing less depressing characters. Hopefully, this character is like the lawayer character she played in "Lawyers of Korea"

dude.... the same guy that LSK had a surrogacy with in Loving You 1000 Times, is also in this drama.

Whoo!! Kim Sang-kyung and Ryu Jin together???!!! OMG, it got really hot all of a sudden. These two actors are soooooooooo underrated- I hope one day more people will recognize their star power. Love them both.

Waah...Ryu Jin once again! I feel he deserve to get more recognition. I love him esp. in Capital Scandal.

wow... pictures look fun... hope Kim Sang-kyung and LSK will pull it off...
actually I really liked Kim Sang-kyung in "Memories of Murderer".His acting was so natural..

Love Kim Sang-kyung in Lawyers! Can't wait to see him in this drama.

Strange to see Ryu Jin and Lee Soo-kyung in the couple picture since they played brother/sister inlaws in LYATT. ^_^

This looks exactly like that Spy drama with Dennis Oh.. except you know, no mixie.

Seems like something I would leave on in the background.

looking foward to it. because i'm a fan of the lead actress. LEE SOO KYUNG!