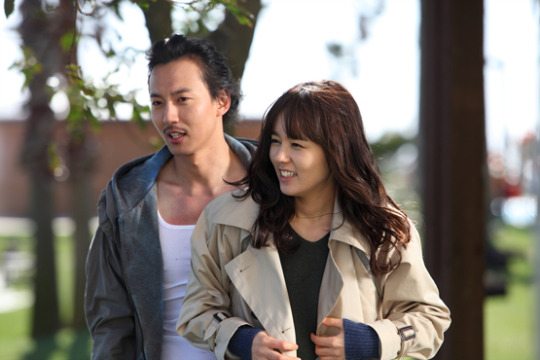 Kim Nam-gil‘s upcoming drama Bad Guy has hit a bump in the road, because it has failed to secure a spot on the upcoming broadcast schedule. Producers had been planning to premiere the series in May on SBS, but against their expectations the show has not managed to snag a slot in SBS’s new drama lineup.

Until recently, it had been planned for the next midweek spot on the SBS schedule. However, Lee Beom-soo’s Giant has been given one of the station’s upcoming Monday-Tuesday slots (to follow Jejoongwon), and Kang Ji-hwan’s Coffee House has taken the other (to follow Oh My Lady). The Wednesday-Thursday slot following Prosecutor Princess is going to Kim Sun-ah’s I Am Legend. And weekends are tied up with longer-running shows like Life Is Beautiful.

A source with Bad Guy‘s PR team said to the press, “At first, Bad Guy was planning to air beginning May 26 on SBS, but those plans have changed. It’s disappointing, but SBS decided to air I Am Legend first. However, we are not thinking of moving to another station or a cable channel just because Bad Guy hasn’t been given a timeslot. SBS is currently looking favorably into matters and when they decide, the official schedule will be announced.”

Bad Guy has been attracting interest due to its PD (Lee Hyung-min of I’m Sorry, I Love You) and its star, Kim Nam-gil. Interest is also high in Japan, as the drama is being co-produced by Japan’s NHK TV.

Oh no.Guess we'll have to wait a bit longer for 'Bad Guy' to air and patience is unfortunately not one of my virtues:-(The trailer looked pretty intriguing and looks very different from the usual K-drama fare.And after 'Antique Bakery', I'm a Kim Jae-wook fan all the way so I'm sure it will be worth the wait.

I'm so depressed!!! I hate that we have to wait longer for this show, its got me all excited.

I think I am Legend should be moved later...it's sad on the par of SBS not to consider BG, isn't BG an SBS production anyway? since SBS secured it when it was announced....

It's too early for I am legend to get an airing slot because it hasn't filmed ;( it can wait a bit. UNLESS they make another slot earlier on Wed-Thurs.

Sad, I was really looking forwardd to this. Though I'm looking forward to I am Legend as well, I agree with #4 and think it should be moved later since Bad Guy has been in production for a while now. Well, I guess the wait can only make the drama better when it does finally premiere.

the bright side of this is: There will be something to watch of KNG's while he's away in the Army, so the wait will be less painful, and less long.

Seriously, Bidam is getting screwed over AGAIN?!? I understand Bad Guy is giving off SOAM vibes, which isn't exactly is a ratings bonanza, but c'mon, give the man a break!

http://10.asiae.co.kr/Articles/new_view.htm?sec=ent0&a_id=2010041915472015804
Lee Jun Ki is going to the army too
about the issue above ...its horrific HOW COULD THEY? I'm crushed
I will cry for 3 nights and 3 days... I was thrilled to see so many goodies in a single drama and the icying on the top is Kim Nam Gil...
on the other hand it could be a good thing because Cinderella's sister would end after ep 4 of Bad Guy and as we know Prosecutor Princess isn't doing very well with the ratings... often the last ep of smth gets the higher ratings and the first eps get the smallest ratings ever ...so if Bad Guy would start on 6 may...it would really suck on ratings

POOR BIDAM!!! :( and w/ his upcoming enlisting, r we to just crossing this whole drama off?!

What's the rush with I Am Legend? I thought they haven't cast the male lead yet... Anyway, I hope that Bad Guy will be successful, no matter when it airs...

oh nooo..but it's still going to air right? they not gonna cancel the drama right?
hope they don't...:(
but KNG going to army soon.. june?
so they just going to shoot the whole thing first..Is it possible?

I keep looking forward to this. I hope it gets a spot eventually.

I've already ranted about this in the Jang Shin-young post but still felt like commenting here too... I'm still upset over the news. Hope SBS air it straight after Legend as prime-time Weds-Thurs material. Hell, if THIS isn't primetime material then what is?
Bidam did great things for QSD's ratings, I'm sure an entire show focused on Bidam will be great enough for SBS.
I know despite how brilliant SBS dramas are they're always overshadowed by KBS' ratings and that's plain unfortunate but why does Bidam have to pay the price, SBS? Aaargh!
I don't think I'll be able to watch I am Legend now, for the sheer principal of it, sorry Kim Sun-ah!
I've scribbled out May 26th for Bad Guy, and penciled in July 21st everywhere, this has to air on Jul 21st!

Let me get this straight - I am Legend - hasn't started filming, isn't completely cast, going on in May. Bad Guy, likely 1/3 in the can, whose star is sizzling hot coming off a HUGE bump in popularity and is going into the military so can't promote it later, pffft nada - no date set.

What are they drinking over there at SBS?

This seems so strange to me. Has SBS been smoking what MBC was last year?

As long as it airs at some point...*knocks on wood and crosses fingers*

omg that is totally a dongjun look a like! they really look like bro and sis or something

aww this sucks. i was actually kinda looking forward to it!

I really anticipated this drama. VERY MUCH.

oh man. bummed out. just the awesomesause trailer had me locked and loaded for this one. i guess we shall have to wait. its not like it will never air since its already partially shot and the cast is too awesome to just let them go like that.

I`m worried about I`m Legend, a rush project again of Suna, I`m afraid that the quality of the drama might get affected Or may be, they started filming already, we just don`t know, news about this drama is so slow, there is no lead actor yet, but another actress was confirmed, remember Madam Jung in CH? She is one of the cast.

I wish they can arrange a good schedule for this drama cause Cinderella`s sister has 4 episode left when I`am Legend air on May 26. I`m afraid it might affect the ratings, 4 episode with low ratings is not so good!

Update, I`am Legend will start filming in May and broadcast in June.

Okay, Kim Nam Gil babe, it's time to take out the sword and kill some executives. You know how you do -- feel like chicken toNIGHT!!

deym. I Am Legend better be good.

so so disappointed that this series will not be aired in May. This was one of the
new series that I was waiting to be aired. Not happy about the change at all.

I'm so sad T____T
I really wait for this drama, because the teaser is so good, and I love Kim Nam Gil

Dear Kim Nam Gil & Star J Entertainment, we are from Kim Nam Gil Indonesian Fanz Club (Biloverz). We had sent some birthday gifts for Kim Nam Gil on 20 March 2010. We called it "Love Treasure From Indonesia". According to the post office's record, the gifts had arrived on 22 March 2010. But we still don't know who are the one who got it because there wasn't any recipient name from the post office's record. So we want an official confirmation about our gifts. We had sent some letters again to the management to get the confirmation, but still no reply. Maybe the management is still busy. And we also had asked the post office, but still no clue. We must know the truth because we don't want that gifts in the wrong hand. There are a lot of our data members in that gifts. We really work hard to make it. We still have some projects for Kim Nam Gil. One of them is "sun moon project" as a gift for his upcoming military services. That's why this confirmation is really important for us. We are all here would be happy if Kim Nam Gil's fans can help each other ^_^. Thx for your attention :).

If someone know about our gifts, send the informations to :
our official email : [email protected]
our official page in facebook :
http://www.facebook.com/group.php?v=wall&gid=221151148889

what the heck, i was really waiting for this drama to be aired.. so disappointing.. but i'll still wait until it would be aired.. =(