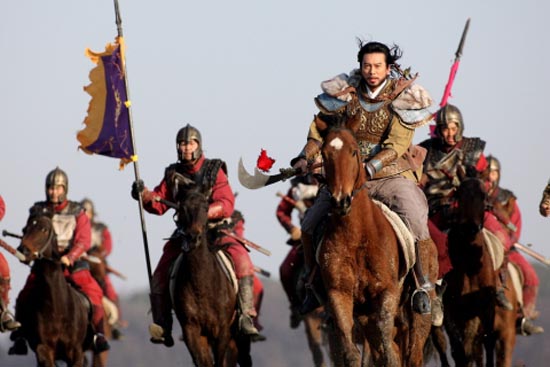 Er, what now? Apparently MBC’s Kim Suro, the sageuk drama based on the founding myth of the Kaya nation, is going 3D, a first for a Korean television series.

According to producers, next month the drama will unveil its 3D portions (titles and making-of videos) after production has been completed. A sprawling battle scene that includes dozens of characters will unfold, literally, before our eyes. Ten minutes of the making-of video have already been filmed, and instead of converting that picture to 3D, it was actually shot from the get-go by 3D cameras.

There have been a few projects (on a smaller scale) that have used 3D video, such as the music video for Jo Sung-mo’s song “Days of Receiving Love,” which was the theme song to Sayonara Itsuka. The documentary Tears of Africa (which follows the hit Tears of the Amazon) is also being produced in 3D. The filming equipment used is the same used in Avatar.

Kim Suro stars Yoo Oh-sung, Bae Jong-ok, and Ji Sung. The first batch of 3D video previews will be released in mid- to late May.

does that mean people in korea have to purchase 3D glasses to see it?

Wow such a brave move from MBC, considering it`s not even aired yet..But still, this drama doesn`t interest me. Well, good luck with them...

wow how very ambitious.. nice.. but avatar in 3D gave me a total migrane lol but I'm anticipating this Drama

i don't like 3d either after watching avatar, alice, up

@1 Rickshot: i think (not sure) that samsung or some other korean electronics company recently released a 3D tv, so i think they made the choice to shoot in 3d in order to boost sales or something along that line. i bet they have a sponsorship from the tv company :>

but they are brave.

a 3D tv?! wow, uhmmm i think i'll pass on the 3D for now, it sounds so expensive! all this technology transitioning is happening too fast for my wallet :(

but then for the viewers without a 3D tv, i wonder if a 2D version will still be aired. or as other posters have mentioned, viewers will need 3D glasses? hopefully not the red and blue screen ones....

Wow - 3D tv huh? I heard about it. I don't even have a LCD, high-Def TV that most people already have nowadays. Still have the old fashion tube tv. I didn't mind Up in 3D but Avatar was also a big migraine for me. So I can't imagine myself liking 3D tv.

Ambitious to say the least and I agree that it must be in conjunction with some TV sponsorship. (odds are that it is anyhow). I do wish them luck in this venture.

UH...wHAT?! they don't even know how the ratings is gonna be, but already film in 3D (?)! They must have big sponsorship money or something...LOL...3DTV? OMG...I would love to have one, but with the economy like this, don't know if anyone can affort it...

Exactly as what I predicted before, this year MBC's big budget series isn't Dong Yi after all, but Kim Soo Ro.

Pretty interesting. The best thing to do is make 3D glasses as swags part of a promo marketing scheme collaborating with newspaper/magazine subscriptions. I think the popularity of Avatar has given opportunities for any country up for that challenge. Goooo~ 3D expertise team! Aja-aja Fighting!

Hmm. I like to read more on Go JooWon since he's a part of this cast. I've been a fan of his since "The King and I" and OBGYN [as Dr. Lee]. It still baffles me how he and Kim KyuJong [of SS501] have such similar facial features.

Well, this show is gonna get long, and so help me Lord that things go well enough to keep this series going till the very last finale. I won't go further how epic this production budget is gonna get.

I think they're doing this only to help promote the drama. Because it's not like people will watch the drama in 3D because how many people have 3D TVs in Korea?

Not everything should be done on 3D, so I hope don't make the movies and dramas only in 3D. :/

So does that mean MBC will launch a new channel?
LMAO I wonder if there will be 3D raws on the net xD....how would we watch those >_<

Honestly, 3D tvs are still in the process of becoming great. The glasses are WAY more expensive than anything else.
If China makes less expensive ones, then I am sooo Buying it!
I am not incredibly interested in this drama, in fact I think it would have been cool if Chuno was in 3D .

Wow, I guess people in Korea have 3D glasses lying around in their house.

Hmm..maybe I overlooked some previous articles, but is it true that actor Kim Suro will be in this drama..?

^ No, that was totally a typo! Thanks for pointing it out, I can't believe my eyes just glossed right over that.

In other (fake) news:

Chuno's director announced he shall rerelease Chuno in 3D. When asked why, the director mentioned that he felt the abdominals of beast men Jang Hyuk and upper torso of Oh Ji Ho should be as realistic (giggle giggle squeeee) as possible. In

When asked to comment, Team MOB member Ockoala replied "in other words, Avatar was made so that Jang Hyuk's body can be in 3D. genius." Team MOB member (and secret, tragic, swapped-at-birth-and-doesnt-realize-she-is-queen-of-shilla twin) Mookie countered "this 3D technology is useless since LDH will still be one-dimensional."

Oh belleza, such wisecracks must be shared with the world, and it shall. Us, your fellow MOB mates, have missed you greatly. :-P

Yup, 3D televisions are the latest tech gadgets people are going gaga for.

I can do without 3D. Old fashioned maybe but ... I don't really want to sit in my house with special goggles/glasses on just to watch tv.....

mehh. what's the deal with the 3-d craze?
i like that we're getting all high tech but personally i can't stand 3D.
i hate it when things pop out at me and when i'm watching a movie, i should be emotionally into the movie and not just picture-wise.
i don't know. im just kind of a wimpy kid and maybe thats why but i don't know if i'll ever become a fan of 3D movies