Jung Ryeo-won in Sleeping With the Enemy 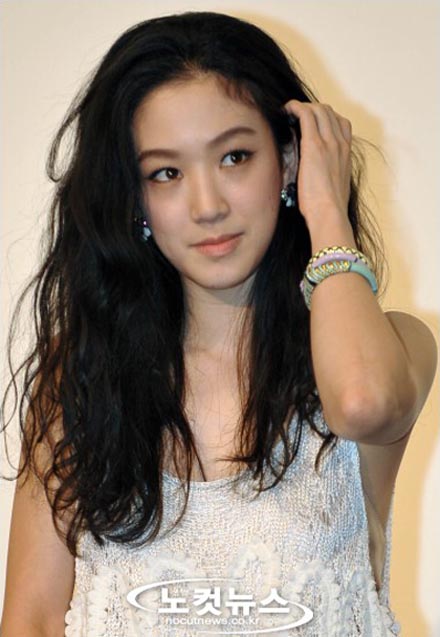 Jung Ryeo-won is coming back with a new movie, Sleeping With the Enemy, which co-stars Kim Joo-hyuk (Terroir) and is set during the Korean War. Her character meets his North Korean soldier character when his troops are given an order to retreat to a small village, and the two fall in love.

With the 60th anniversary of the outbreak of the war coming up this summer, we have no shortage of war-related projects, notably So Ji-sub’s Road No. 1 and Kwon Sang-woo’s Into the Gunfire. However, this film aims for a different focus; while the others portray the war in a harsh light, Sleeping With the Enemy is striving to convey a “warm humanity, like in Welcome to Dongmakgol.”

Sleeping With the Enemy will be directed by Park Gun-yong, whose last project was the sports-comedy Lifting King Kong. Filming will begin on the movie on May 27.

We haven’t heard from Jung in a while, it seems; she had a drama and film last year (Ja Myung Go and Castaway on the Moon), but both were subdued affairs and Jung hasn’t been much in the public eye recently. It’ll be good to see her onscreen again.

Whoa! Im so excited to watch this!

I really like her, I just wish she would eat more. She is so skinny, bordering anorexia. I hope there are more news regarding her and Daniel Henney. They are the only couple, in a non romantic kind of way, that I really believe and feel that genuine friendship between them. You know not just, publicity or for CF purposes..

The face that started me on my K-Drama addiction! I absolutely love this actress. It'll be great to see her again...

She is so pretty! And I like her personality on screen -- smart, cool and unique.

That's funny, I was thinking she was starting to look better and not so anorexic looking.

I really enjoyed her in Castaway on the Moon. Very quirky.

I love her features. Her face is the definition of perfection. I wish i could have that long face frame. She's skinny but she's very pretty. She would definitely look better with a little weight on. She fits spunky type of roles. I love her in those.

She's so pretty as always! Love her smile and her hair!

It's funny, whenever news about JRW come up, the netizen always comment about her looks, how skinny she was or does she back to normal size etc., like there nothing else to be talk about. Anyway finally she's back to Korean ent. after a long hiatus. So what happen with her plan to try breaking into international market (Hollywood) ?

@dandy: cause she was a idol group member. and when u're in idol group, somehow that tends to be the main topic. the girls generation's girls always get that treatment somehow.

but she was THIN. but i like her. i think she is a pretty decent actress, just happened to pick bad projects. but it happens sometimes, no?

imagined if she was the one casted in athena. :P (sorry, i don't mind lee ji ah. she's okay to me, just a little ... wooden. and i just finished commenting on athena, so it still lingers on my mind)

"imagined if she was the one casted in athena."

She'd be a natural in any kind of American-style show. I'd love to see her do a Gray's Anatomy-style med show.

loooove her<333 idk why, but she reminds me of Tiffany of SNSD.

She was so good in Castaways on the Moon. That movie is critically underrated. I can't find other people who have even watched it, much less liked it.

i want to see the movie. i meet jung ryeo won.

I love that picture of her, she looks so casual yet gorgeous at the same time. Can't wait for more news and pics to be released for this new movie of her's.

I have not watch this movie yet cuz I am still watching WHat star are you from. She is simple yet down to earth personality. Just love her. Her fans are just waiting for more dramas and movies in 2012.