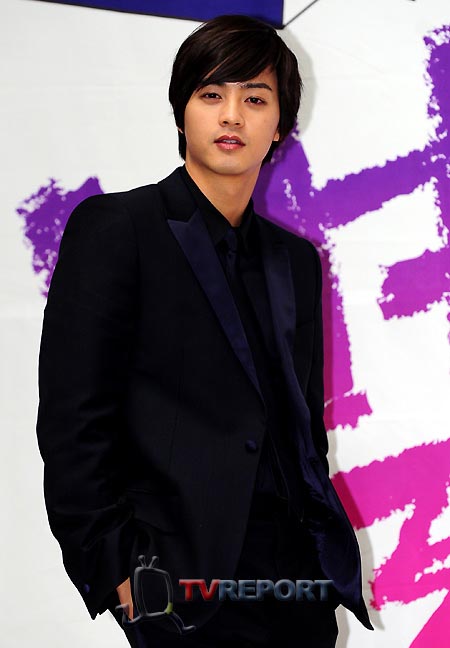 Another actor goes from screen to the stage: Kim Ji-hoon, most recently of SBS’s drama series Wish Upon a Star, is making his theater debut with the play University of Laughs. Kim has mainly played nice guys in modern dramas — his cold lawyer in Wish Upon a Star marked a successful change for him — and now he makes another change with a comic character in the play.

Kim plays a passionate writer and said of this project, “I’ve been passed the baton from Bong Tae-kyu, who gave such an enthusiastic performance in 2009. I do feel the pressure in following an actor who is so skilled at comic acting, but I’ll work hard.” The play was a huge hit in 2008 with Hwang Jung-min and Song Young-chang and boasted 100% ticket sales, and its encore presentations have also featured talented performers. This time will also include other name stars aside from Kim Ji-hoon, such as Jung Woong-in (Last Scandal of My Life) and Jo Hee-bong (Hong Gil Dong).

The play is set against the 1940s backdrop of World War II, contrasting the tragedy of the times with a humorous outlook. In a society where censors are out to eliminate all forms of comedy, a particular theater company (the titular University of Laughs) specializes in humor. The play unfolds over a seven-day period as our comedic writer faces off against a cold-hearted censor.

Why is he groomed so perfectly?

I quite enjoyed his mix of Mr Darcy and Mr Palmer in WUAS tho' his character fell apart in the second half of the drama.

I really miss Wish Upon A Star! He looks so good w/ his hair slicked back like he did for the lawyer role. Please do another kdrama soon!!

Oh I'd like to see this! There's no way I can go to Korea just yet though *pouts*

mmmm ... is this based on the Japanese movie of the same title (University of Laugh / Warai no Daigaku) written by Koki Mitani? the storyline is similar to the movie.

I hope this stage play would still be showing on July...it'll be my 1st time travelling to Seoul & it'll be a great treat to see one of my handsome "crushes" performing live on stage!!! JB, hope you can update us later..on the playdates & venue...please? thanks once more!!!

isn't he due for another underwear endorsement around now?

the last one in that one magazine was soooooo long ago.

@pabo ceo reom, i'm glad someone's keeping track! i just go back and look at the old pics whenever... ^^

last week we learned about guyliner. now we need a term for men's lipgloss. JB? anyone?

@ 3 Sonam, tottaly agree with u......he was so charming in this role! Just wish i could see his debut stage!

Thanks for sharing this piece of news. Congratulations for another new great chance for Kim Ji Hoon but I sure will miss him much on the small screen ;_;

Thnx for this article...I'm so happy for him however like Linda @12 I will surely miss seeing him on small screen or kdramas! i wished i cld watch this debut on stage in Korea but just getting back from that beautiful country, I guess I'll miss it unless it's still running when I decide to go back hopefully soon!
Congrats & more power to you Kim Ji Hoon! I'm sure he'll deliver very well in comedy coz of his versatility! I hope also there's a chance that he could still do another drama in between? (not sure, sigh sigh) I love him in all his dramas & I was hoping after SFFTS that he'd be up to another drama project!