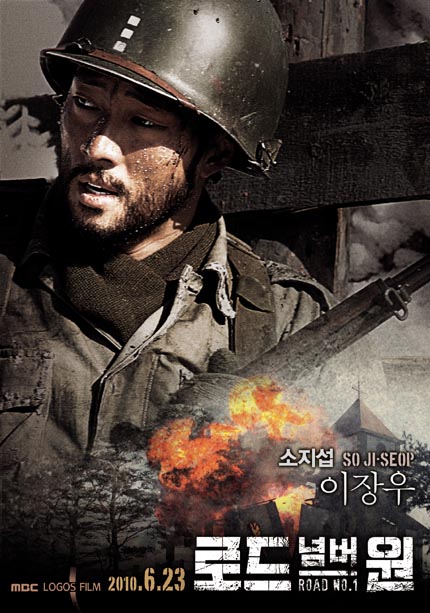 The posters are out for MBC’s epic war drama Road No. 1, starring So Ji-sub and Yoon Kye-sang as soldiers during the Korean War and Kim Haneul as the woman who comes between them.

So Ji-sub plays Jang-woo, “a dramatic and strong character capable of giving up his life for the woman he loves.” That woman is Soo-yeon (Kim Haneul), whom he has known since youth, “and he races onto the hellish battleground to protect her.”

While Soo-yeon puts her faith into waiting for Jang-woo’s return, there’s another man at her side, Tae-ho (Yoon Kye-sang). He falls for her at first sight and eventually they become engaged to marry. He feels deeply betrayed at his fiancee’s reaction when Jang-woo comes back alive from the battlefield, but can’t let her go either. In the end, both men go out to fight during the Korean War. Although Tae-ho is jealous and angry of the love between Jang-woo and Soo-yeon, over the course of the war he develops a close comradeship with Jang-woo.

SO. JI. SUB. i love, love, love him! hehehe. i'm counting down the days until this drama begins showing!!

Is it just me or does it seem like Kim Haneul lacks emotion in her poster? I don't really feel her sadness when looking at her at all.. It seems like she's trying too hard to look pretty while crying..

am i the only one who thinks "OMG PEARL HARBOR MUCH?" upon reading this?

i really like so ji sub though, so i'll probably consider watching this when it airs. but the phrase “a dramatic and strong character capable of giving up his life for the woman he loves.” That woman is Soo-yeon (Kim Haneul), whom he has known since youth, “and he races onto the hellish battleground to protect her.” - uhh which Kdrama hero ISN'T depicted like that, generally speaking? haha.

thanks for this news JB!

Whoa Yoon Kye Sang looks drop dead gorgeous in that poster. Was considering watching this for him and 'cuz I have a soft spot for Kim Ha Neul, but I'm convinced. :)

Thanks for the posters, Javabeans!

My two favorite actor Ji Sub And Kye Sang I have them both as my screen saver. I really don't care for Kim Ha Neul so I guess I let this one pass. I have learned to watch Korean drama that interests me and not because I dream about the actor a hundred times.....LOL I'm slowly getting my addiction under control using this best practice.....

aww pearl harbor...
but LOVE YKS, finally a manly role for him hehe

I wish the actress was the girl from Golden Bride, I REALLY like her!

3 jandoe:
Yeah 'Pearl Harbor' also came to my mind when i read the lines describing the plot. I'm no fan of that movie at all, so hopefully the drama won't follow the same style.

What is keeping me excited of this drama is the cast!
So Ji Sub, Kim Ha Neul & Yoon Kye Sang!

I really wish this drama to be a sucess and has high ratings because I LOVE them all, specially Yoon Kye Sang!

Yes, the story reminds of me Pearl Harbor movie too. I can not wait for this drama.....been waiting forever for it. I love you So Ji Sub!!!!!!

Nobody does it better..JiSub has the saddest (and oh-so-sexy..) eyes..I am so anticipating this drama even if it will make me weep...

Looking forward to this. Like the male leads. Loathe the female lead. Love it if different from "Pearl Harbor."

As has been said, pearl harbor much.
i'm excited for YKS,
but i will admit, SJS I'm not familiar with.
drama/movie recommendations with him in it?

also why do K-drama characters always have the strangest/dramatic character descriptions?

Oh gosh, it seem very interesting and more like AWESOME action drama to relate to fascinating story --- I can't wait to watch this drama on June!!! (squeals so excitedly)

even though im not sure abt so ji sub..kim ha neul is my all time favorite korean actress and i absolutely adore yoon kye sang.!!...so even though i do my darnest to stay away from historical/war/meldramatic dramas..i may actually catch this one for these two

So, what do we think? Both soldiers die at the end?

OMG this reminded me of pearl harbor too! haha

Ha! Pearl Harbor, Korean style. I bet someone dies at the end. And whoever returns alive gets the girl. LOL

Romance should never be brought into a war movie. It's too freakin' boring.

I forgot this was a drama. Didn't read much up there LOL Confusing this for the other Kwon Sang-woo movie.

i always satisfied with SJS.. *cough unlike his fellow*cough..
anticipating this..
i pray this drama won't have small rating. ( i even can't imagine )

So Ji-sub!!!
Go ahead and uglify yourself all you want, you still make my pulse race, you smexy mother!

SSJ and YKS, wow! But I can't stand this 'Pearl Harbour' storyline. And I never have any feel for KHN. Will probably give this a pass, sorry.

woow, finally poster can't wait, i read the synopsis of the drama, i really liked it, anticipating the drama,. I love SJS!

@24 anna: Hehehehe I hope nobody dies in the end and I hope the drama isn't to melodramatic. I'm tired of the melodramas cliches in korean dramas... T_T Hopefully this drama will bring something fresh or a twist to the 'pearl harbor'-like story!

lol @ supah's comment
this is the thread for fangirl drools

SJS , my favorite actor , likely this is meaningful , interesting drama . I watch The
brotherhood of war , Seoul 1945 , i'm really interesting in K war , very touching ,
make me cry several times .
SJS is capable to deliver different characters in the perfect way , as a prince charming , a cool gangster , a brave soldier , a smart espionage agent ...he is very unique
in look and in acting , make you addict to him .

Ps SJS please not die by the end , I hate the ending of what happened in Bali .
all casts died in vain , what the meaning of dying for love , psychotic ?
I like God of study philosophy , not dying for love , out there a lot of people you can love and love you why be obsessed with someone you can not get , be happy for them and go on with your life .

oooh what a strong cast!

And i thought it was a movie...

This is cool! I'm very excited to see So JiSub again in a drama. Good luck!

Yay! I was excited to hear about the cast of the drama. YKS and SJS are my favorite actors damn they're hotties lmao. I admit though I have not watched pearl harbour because I don't exactly enjoy war movies but this one better be good