Story of a Man

Story of a Man wins at Houston International Film Festival 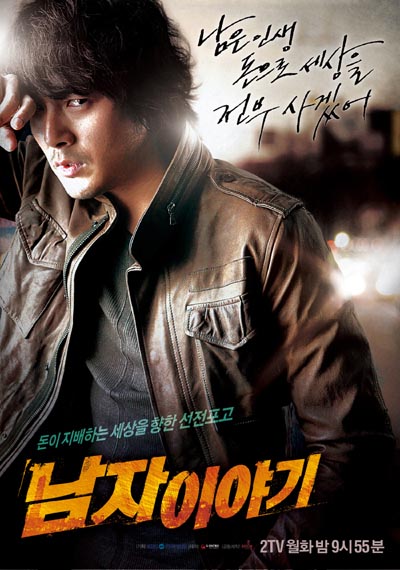 KBS’s thriller series Story of a Man, also known as The Slingshot, has picked up an award — the Bronze Remi — at the 43rd WorldFest–Houston International Film Festival, which has just announced its winners. The drama won in the “TV Series – Dramatic” category.

The festival is dedicated to independent works (and doesn’t accept studio projects for consideration), and the Remi is the name of the honor given in each category. (There are platinum, gold, silver, and bronze Remi Awards given to the first- through fourth-place winners.)

I don’t know much about the festival, which describes itself as “one of the oldest and largest film & video competitions in the world, with more than 4,500 category entries received from 37 countries in 2009.” I don’t think it’s profoundly important to the industry back in Korea, but it’s always interesting to see which dramas get picked up in international competitions (like Hong Gil Dong at Roma Fiction Fest). And I certainly think Story of a Man is deserving — it’s one of the sharpest, tightest-written dramas I’ve seen, plus a helluva lot of fun.

EDIT: My bad, I missed the separate report that SBS’s Painter of the Wind also picked up an award, a Silver Remi in the same category. Other winning series in that category came from Australia, Ireland, and Poland. Story of a Man and Painter of the Wind were the only two Korean dramas that won at the festival, which has something in the vicinity of 60 categories.

Tags: awards, Story of a Man

One of my favorite dramas of all time. Definitely deserves the award.

all film festivals claim to be the oldest - if not, the youngest or the "first" =P

nevertheless...daayyyuuuummmm! go story of a man! after reading your recaps i really wanted to watch it! maybe once summer comes along... i wonder what other television series it went up against...

have bought the DVD but got no chance to watch it yet. Must do so soon!

Yeeesh Do Woo is one of my favorite drama characters of all time.

Houston is currently hosting an International Festival which spans two weekends. Lots of people, lots of music, and lots of fun. The film festival has been a long time staple along with the festival, but is nothing like SXSW in Austin.

By the way, SOAM is one of my all time favorites..

that's great!! i wonder how those judging committees watched it; some judges must need english subtitles no? does that mean subtitled DVDs were released?

Deserving ! It's too underrated in Korea...

It'd be interesting to see something along the lines of an international Emmy like there's foreign film in the Oscars, but who has the time to watch an entire season of a show.. whether it be foreign or not. (The Emmys are a joke)

I liked the prison story, I thought it was interestingly intense but failed to capture me afterwards. This is why this Kdrama was a major failure to me despite a strong start.

The best drama of 2009 and one of the best dramas I've seen ever. Well-deserved for Story of a Man

@kaedejun,
Alas, Story of a Man was up against two hit Queens -- Queen of Housewives, then Queen Seon-deok.

While its numbers weren't high, I actually think that's probably the range for intricate and intense dramas, which are more suited to be mania hits than mainstream blockbusters, no matter how deserving. If I recall, its 9% ratings were similar to Devil's, which is in a similar genre (maybe a little higher, as I recall Devil's were around 7% to 8%).

I live in houston (5 years ) and I never heard of such festival lol
but congrats to them!
I liked your recaps so i never actually watched the drama itself except some parts that you recommended but the end was WOW !
great actors, I guess in the korean mind a good drama have to have a cinderella and a prince otherwise it wont be liked i guess...too bad

Same thing here @ onie80 I live in Houston and its the first time I hear about this festival. But its great that Story of a Man is being recognized. Congratulations!

congrats! I loved them both. They deserve those awards.

I loved this drama. Remember watching it on my summer holiday. Good times. Loved the 2 male leads. Want to see them both in a drama soon again!

Oh I have not watched either of them! Gonna check them out later after finals. Thanks for the news!

Good! I'm glad SOAM is at least being recognized somewhere.

THIS is WHAT I am talking about that! Bravo! Bravo! (praising dances so wildly)

this was such an underrated drama!!!!
Loved this drama one of the best made period!!!!

@11 janna:
If I'm not mistaken the Emmy has an award for foreign productions. But I'm not sure what type of production they award, if it's the soap operas/faily dramas or if it's the miniseries

@8 Sonam
PYH was also the reason I enjoyed watching 'On Air'. :P And even though I hated his character in 'Winter Sonata' (and I hated the drama too. 'Winter Sonata' is #1 in my top worst kdrama list), I think PYH acted well in that drama.

I live in Houston too! Wow, who knew there were so many Houstonians that visited this same website.
BIZARRE!

And I've heard of the festival, it was in the Chronicle a few days ago.

Wow...
i just watched painter of the wind in December last year and its one of my fav dramas...
and i just started watching story of a man 2 days ago!

i feel so good :D esp cos these dramas are really underrated... yay!

@8 , 25 hehe.. on air was the first kdrama i ever watched... and PYH was fab in it :D and i got through the first few shouting matches in the first ep only cos of him, and the fact that i thought i was new to kdramas and this was probably how they all talked and it a probably a cultural thing that am not getting.. lol...

no offense, but korean award shows are a joke.
i'm glad that two deserving dramas picked up this award :)

I'm proud of both.

Painter of the WIND was amongst my three top fav. SOAM is excellent i just don't have time to watch it yet.

i am proud as fan of this drama congratulation all crews.

@27 kpm1111: eheheheh I know what you mean about the shouting on 'On Air'... it also bugged me in the beggining, but the drama gets better later. 'On Air' is one of those dramas that you know it's not well made, but it's so addicting you can't stop watching.

@28 Gloria: I think so too. Korean awards show only gives awards to dramas that have high ratings or buzz. They don't care if the drama has quality. It looks more like popularity award than quality award. I hope Korea creates some cerimony to give awards to dramas based on quality only.

Still depressed about not getting my KS/ES ending, but I loved the series. Definitely deserving of an award

Story of a Man was definitely one quality drama. The tension and the pacing was really spot on. The cinematography and just set-up of the juxtaposition of the shots were beauty. Too bad about the ratings, it really stood out for me.

hehe I live in Houston and never heard of this, but then again i never know what kind of events there are in houston
I'll be really happy if they did find this award important and then fly here to do an event! hahaha, which is most likely never will happen. LOL

It was one of the best written kdramas I've ever watched. It never got slow or boring.

Javabeans, your high praise of this series and your praise alone (because unfortunately the ratings were so poor), I watched Story of a Man. Thanks. I wholeheartedly agree with your assessment. Quite probably among the best I've seen.