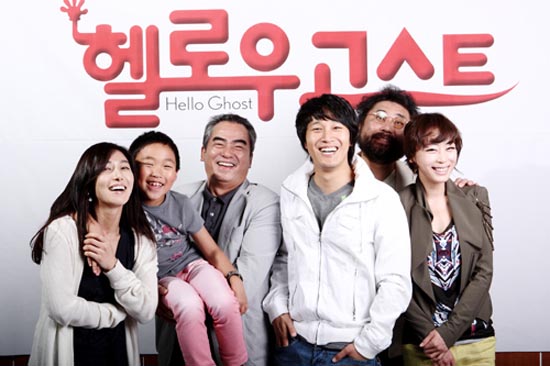 Cha Tae-hyun (Speed Scandal) is pairing up with Kang Ye-won (Haeundae) in a new movie, “human comedy” Hello Ghost. (And for Wish Upon a Star fans, that is indeed Pa-rang in the cast!)

The story brings to mind movies like Heart and Souls and A Christmas Carol, but with a darker twist (considering it’s a comedy): Cha Tae-hyun plays a lonely and depressed man who keeps attempting suicide, but just before he does, he’s visited by ghosts who change his mind. The ghosts all have different personalities (the pervert, the crybaby) and will be played by Lee Moon-soo (Good Morning President), Go Chang-seok (Rough Cut), and Jang Young-nam (Harmony). Meanwhile, Kang Ye-won plays a hospice nurse.

Cha, who is coming off one of the most-attended Korean movies of all time in the comedy Speed Scandal, explained taking the role: “The script was really good, and when I showed it to my wife, she told me to do it right away.” The movie held its first script reading last week and will film through July for a release in the latter half of the year.

i thought pa rang would be a ghost too. that would be funny. i'd love to see him freaked out by a little kid.

Hee! I'm so watching this whenever I'll get the chance. :)

I love the name Pa-rang!

Wow!!! I am definitely intrigued! Now a storyline that's not so typical, yet, contemporary in a Christmas Story sense. I can't wait for it! :D

looking forward to it!

First thing I noticed.. oori Parang is back!!!! Okay, I stopped squeeling.

This does look very interesting. I'm definitely going to watch this esp as I liked Speedy Scandal a lot!

i adore adore cha tae hyun!!...he's hilarious and moving and eerything at the same time..im sooo looking forward to this!...and....Paaaaaraaaaangaaaah!!

Will watch this when it comes out. Love Cha Tae Hyun, not the best looking guy out there but sooooo talented and as an actor that's what really matter. One of my favorite korean actors.

I think you mean "It's a Wonderful Life," and not "A Christmas Story." Unless he is also lusting for a Red Ryder bb gun... :)

Oh, I actually meant Christmas Carol -- I forget it's not the same thing as Christmas Story! Although I suppose there are shades of It's A Wonderful Life in there as well.

I love how CTH gives his wife credit--he is too cute.

Sound interesting. However have to wait DVD release with eng sub to watch. Thanks for this information. Got liitle glimpse like It's a Wonderful Life when saying Cha Tae Yon want to commit suicide. Must watch for fun ride.

I've watched Speed Scandal like 4 times. This looks like it could be really great. Now for the terribly long wait.

Squeee!!! Can you guess I'm a total Pa-rang fangirl?

Loved Cha Tae-hyun in Flowers For My Life and Speedy Scandal!!! Will look forward to seeing him again, and looking out for sweetie Pa-rang as well!

OMG. I am so excited to see Cha Tae Hyun back on the big screen!!
I have missed him so!
Too bad he doesn't go on variety more often though... he is absolutely HILARIOUS!

I love Cha Tae-hyun. He is a good actor. can't wait!

LOL I always forgot that he is married.. hehehehe

OMG! I just watched this last night and cried my eyes out!!! (T.T) What a great story and a definite must-see Hallyuwood film! ^^