From the set of Birdie Buddy 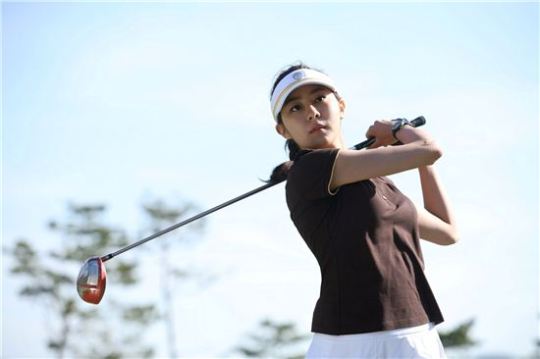 New stills have been released from the set of golf drama Birdie Buddy, and on the upside, they’re better than the posters released last week. On the downside, I still haven’t found anything enticing me to watch the drama.

One nice aspect is that Birdie Buddy takes place outside of Seoul in Gangwon province, with a large chunk of it taking place at the High One Resort, which means more opportunity for appealing settings and pretty scenery. The series began filming at the end of March, which also gives it plenty of time to work on post-production. Birdie Buddy is directed by Yoon Sang-ho of Tamra the Island, another manhwa-to-drama adaptation, and the fantasy sageuk Legend, both of which I found entertaining despite some flaws, so it’s in competent hands.

In addition to main leads UEE, Lee Yong-woo, and Lee Da-hee, the drama also features Yoon Yoo-sun, Yang Hee-kyung, Oh Hyun-kyung, and Yoo In-na. According to production house Group Eight, prior to filming, the cast received golf lessons from the top pros in the country, from the adults to the child actors.

The drama doesn’t yet have an airdate, but is aiming for a summer broadcast.

it sorta looks cute xD
well, I loved THI, so I suppose this one will be good too.
Not that into golfing tho... My ex was into golfing...
HAHA! tmi? xD

Eep UEE looks so depressed in these pics. I hope it's just the shots and not her actual acting! Although she was pretty good in You're Beautiful, her character is not a hard one to pull off - but being the main character is more dynamic. I'm hesitant about this drama because last time a singer-turned-actor starred in a sports-related drama it didn't work out too well. Hopefully UEE's experience in You're Beautiful will save her.

The drama actually right now is awesome, hahaha~ She's the cheerful character so things are going well ;D She's cute and perfect with Lee Yong Woo (Just to mention, his "rag hair", as stated in the drama, only lasts like 2 episodes, and then he gets a haircut and turns into a real cool dude lol xD

DISASTER in the making...

let's say it will compete with Kim Suro or Road No.1... i think the ratings will normally fall 5% or less than that. they better find a better competition then.

what is so exciting about golf anyways? some people wont even call it a sport. the only reason golf was in the news lately because of mah boy tiger woods and it was not even related to the sport.

i've heard though that yoo in-na is hot.

Sorry but I'm superficial. Those dreadlocks are huge turnoff. Also, didn't really find UEE such a competent actress as to hold a lead role.

I'm so frustrated as a person with dreads. I love my dreads and they are beautiful and i take amazing care of them. Sadly when dreads are depicted in the media, this is usually the result. He look ridiculous and his dreads look awful. Just adding the the many negative stereo types associated with dreads. Why is his character even sporting the style. Isn't he a golfer?? It would be too heavy and cumbersome for a golfer to seriously wear this style.

aah...those dreads...they better change his hairstyle fr me to wanna continue the drama at least aftr the first 2 eps

The dreads omg lol. Please tell me they added them as a joke.

I'm teasing my mom that I'll dl this drama for her. Hahahaha! She's really pissed off with UEE in YB!

The dreads ... lol. I'm getting major secondhand embarrassment due to him.

I just don't get the point of this drama, I mean there was a golf drama about six months ago and it wasn't too good. In fact none of the sport dramas of the last couple of years (with the exception of the 8 episode drama Fight) have been good. I feel like if I end up watching this show it'll definitely be one of those 16 episode dramas finished in 12hours.

+1 for the decent outfits.

Boy, they are more hideous than I imagined! I guess this further proves that having a handsome face doesn't mean anyone can pull of any look.

I would be fine except for the DREADLOCKS! PLEASE PLEASE GET THOSE OFF SOON

im ok with everything else EXCEPT for lee yong woo's hair,,,,,,,,,
somehow, I don't think it will work out great for this drama

Well in the manga itself... the male character had dreads. They had to keep him similar to the original character.

The dread locks are scaring my away from watching the drama.

Sorry but all sports dramas have sucked, add in to mix UEE who can't act, and dreads that would steal every scene (and not in a good way), you can safely say Im not touching this with a very long bargepole.

I was like OMG, dreadlocks!!! LOL
After reading few of the comments above...I cannot stop laughing now....hahahaha....

The dreadlocks are bothering me.

I have seen a few Koreans with dreadlocks and rocked them...CHASEUNGWON being one.

I'm going to be rude but people can't shut up ?
If you dislike the dreads so bad, STOP LOOKING, gosh' !

Seriously, I pity people who say "golf is boring = boring drama".
I'm not fond of golf, even I don't know anything at it but this drama makes me love the golf and its passion.
I'm in episode 4 and I can't stop watching because it's just so good. In storyline and visual.
I don't remember the episode but there was one scene where the guy danced with the ball, it was pure awesomness. Like they mixed different arts :D
And when the other girl was playing, butterflies showed her the way, it was more than beautiful. There is no words for it !
I beging to hate generic dramas who has 4 lovers, rich/poor, naive girl and macho boy ... etc. But even if most of korean dramas are like that, you can always find a pearl among them. Something who will bring you more than "eye-candy".
And for me, it's Birdie Buddy ;D
Hope the ratings do well because it will be such a shame ! And people who nastily commented, I hope you had changed your mind about the drama. Even if not, i don't caaare because I'm proud to watching such a good drama ^^ <3