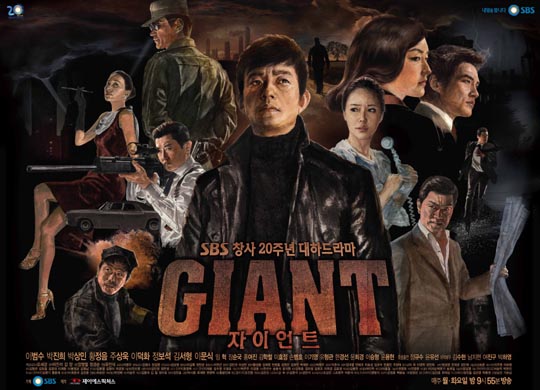 The poster and preview are out for SBS’s Giant, which stars Lee Beom-soo, Park Jin-hee, and Hwang Jung-eum and will be airing in a week’s time. The poster takes a cue stylistically from the ’60s and ’70s, which is when the drama takes place. Giant‘s main backdrop is the economic development of the ’70s, but the drama does spend a good amount of time in the main characters’ youths.

Said the drama’s PD Yoo In-shik (Robbers, Surgeon Bong Dal-hee, Lovers), “We’re giving this drama the feel of the past, so we wanted to make a different and novel poster. We met with famous illustrator Jo Sung-min and started working on it about two to three months in advance.”

Giant is written by writer Jang Young-chul (Dae Jo Young) and replaces Jejoongwon on Mondays and Tuesdays and premieres May 10.

I’m… not quite sure what I think just yet. The preview is quite different from what I expected, and not in a bad way… It’s certainly ambitious. And tone is vital — if they go to over-the-top, I can see this easily getting cheesy rather than stylish (ahem, A Man Called God). But if it manages to hit the tone it’s attempting, it looks like it’s going for a moody, luxe appeal that recalls Sandglass, with a dash of East of Eden thrown in.

Period, old-days dramas are not really my style even though i love PJH and HJE so i think i'll pass. I'm just attracted by the poster, it's a nice concept for a drama poster. I always think that korean dramas don't really put in a lot of effort on their drama posters but this one is quite a WOW-er, great illustrations. The other drama poster that i thought was stunning is Jang Seo Hee's Obstetrics and Gynecology Doctors.

Yep agree with you JB!
PJH is stunning!
She looks different, and 1st time seeing her in a kinda villain role.

As I love, love, love dramas that go back in the past, I couldn't help but adore this poster! I'm worried the drama might be boring, but I really want to see how the drama will be like.

While I'm not overly excited for this nor is it on the must-watch list, I'm still quite interested to see how the Giant will turn out to be.

For the actress I kinda like the jazz singer better than PJH.

This trailer got PJH in it. The first one I saw, I couldn't find her there. And yes, she looks stunning. Does she play a villain role here? So excited that it's going to air soon! Giant, fighting!

e poster sure looks like those old poster tat was hanged on e theatres. *love it*
e preview is kinda dark & heavy for my liking but may try few epi for LBS & PJH.

I'm curious why they chose to use Bach's St. Matthew Passion as the music? Hmmm...very interesting choice of mood music.

Hmm, interesting. Nothing interested me about Giant at first, and the plot still seems like something I'd get bored of, but this trailer looks intriguing, so I might check it out the first week.

Oh, freakin' hell, this looks FANTASTIC!!
I was really looking forward to this drama starting next Monday, for Kim Soo Hyun! I'm still bowled over by his acting in WISFC, and secondly Nam Ji Hyun.
The grown up portions of the drama suddenly seem worth checking out too.

the poster is gorgeous - it has that charm and sensuous allure of the years past
i wasn't really interested in this drama, (already got so many on my plate with personal taste, cinderella's sister and dong yi - the most i've ever watched at one time) but i might have to take peeks at it. (: