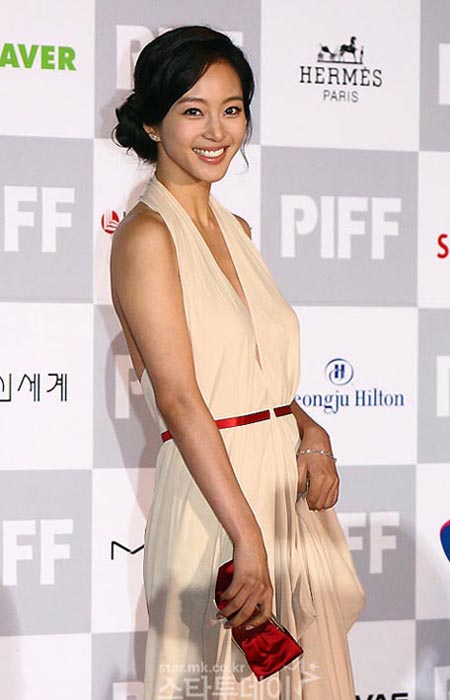 Han Ye-seul (Will it Snow For Christmas) has been offered the lead role opposite Jang Geun-seok in You’re My Pet, the Korean movie remake of the Japanese manga and drama. According to her management company, she is looking favorably at the role, but hasn’t made her final decision yet.

Huh. I predict lots of anguished responses, but I guess I can kind of see it see it: The role is of a statuesque, beautiful professional woman. Han is tall and can play sophisticated hauteur (see: Fantasy Couple), and she’s certainly beautiful. She has been dogged with acting criticism throughout her career, though, so I can’t say I’m thrilled, but I don’t abhor the idea. It’s just that despite Jang’s youth, he has a more charismatic presence and a lovable charm and may (and will probably) out-act her. Well, it’s better than Han Chae-young? (Actually, I think Han Chae-young fits the image better, but her acting skills are pretty erratic.)

You’re My Pet will begin shooting in June.

ehhh i'm not too thrilled

I can't see her as Sumire.

Umm, okay I can see it, but can Han Ye-seul pull off the role, I'm not too sure. Even though the role is supposed to be a sophisticated woman, she is usually conflicted and after watching WISFC, I'm a little doubtful if HYS can pull it off. On the other hand, it's better than Han Chae-Young because that would just be odd.

Can't say I'm too thrilled about her taking on the role of Sumire, but she really does look pretty in that picture up above. She can speak fluent english if I remember correctly? That should be to her benefit for her role as Sumire. While I'm not estatic that with HYS, I would be even less inclined to watch if it was HCY, I've not been impressed with the projects that I've seen HCY in.

I just watched Fantasy Couple recently, and I absolutely *loved* Han Ye-seul as Anna/Sang-shil. That is the only role of hers I have seen, but I thought she was so excellent and hilarious and she absolutely stole the show. The fact that she has received criticism for other roles does make me worry a little, but I'm still looking on this possibility favorably. I have a hard time imagining her with Jang Geun-seok but that isn't necessarily a bad thing.

If it was HCY, on the other hand, I would swear off this movie forever. Her kissing alone makes me never want to see her in another romantic role. And if Kim Hyun-Joong had ended up in this role instead of JGS with HCY? It would have been a repeat of their terrible pairing in BOF and, well, I might have had to see that just to watch it go down in flames.

whoever the partner is, i'm happy that i'll get to see JGS again! weeeeee! :)

I'm skeptical about this pairing. I've seen almost all of Jang Geun Suk's performance with the exception of one or two movies and I'm curious as to how he'll portray Momo. His character in You're Beautiful definitely won me over after a series of what I considered mediocre performances in other dramas. I don't know what to expect but I'll be hoping for the best with this pairing.

lol, why are you guys counting being able to speak english as one of the only good points about HYS acting as sumire?... sumire doesn't even speak english in both manga and the jdrama. and i think she would do so much better than han chae-young. but i'll be honest, even though i love HYS... i think jun ji hyun would fit the image better-i'm not too sure about her acting though

Oh no! The female lead is the main focus in Kimi wa Petto! The male lead is such an afterthought in many ways -- he is more of a catalyst for change in the female lead. That means, we need an actress who can act. And Han Ye-seul was terrible in that Castaway Korean remake (I haven't seen her in anything else).

Bah! Why would they offer the role to her of all people?????

The Japanese version was so bad even though they had such strong lead actor and actress...I am v surprised that JGS who is so discerning has agreed to do this. Wonder how much of the sript the Koreans can improve.

The storyline is just so boring and draggy n infuriating. I am surprised that Korea will even attempt this...

I am not thrill about this pairing, she seems too young for the role. Then again, it could be worse.

the two have actually worked together before on Nonstop 4:
http://www.youtube.com/watch?v=3Y8L__8-Kss
(go to 3:05 to see their hilarious interaction)

pretty excited for this :)

She looks beautiful and sophisticated enough for the role. I would give her a chance. In J-version is it Jun Matsumoto as a leading guy? I 'm not interested in the Japanese one. I hope Korean version make it better.

Actually, only JGS is enough for me but please not HCY.

i'm not gonna watch it if its her. she's pretty but nahhhhhh
i was hoping for someone like son ye jin or hwangbo even.

I pray that SuAe could accept the role... I think Han Ye Seul looks too young for that role, from her I havent seen the confident and over-achieved lady like in You are my pet.. :( Han Chae Young has that aura but her acting is questionable.. :(

i love her acting in tazza and fantasy couple~
and I love her.. why don't we give her a chance
she's pretty and look profesional,
just like the producer want~
I would love to see the cast! jang geun seuk and han yeseul??
say yeah!!

Haha. I hope that she would consider the role. I love them both in Nonstop and seeing them again will be epic. OMFG i hope this drama won't suck.

Why her?! The woman is terrible for the role. I know I shouldn't say anything before I actually see the movie but it's just not right. I've seen HYS playing characters like Sumire and she's just bad.

Wow, she's really beautiful =D
But I don't think I will watch this, I think I prefer the Japanese version : )

nooooo....first kim hyun joong dropped out T_T and nw d female lead is HYS? (i dun hate her but i dun like her either) Whatz happening? I dun think am gonna watch dis one ever...horrible pairing...amean the japanese version was awesome...the chemistry and also d pairing was perfect, love sumire n momo...what happened to ha ji won...is it coz shez not tall enuf?

Nah i don`t think she`s the right cast. My dream cast will be Ha Ji Won!! I know JGS is gonna be thrill to hear it!

Wow we think alike at the same time!! lol

I really can't see her as Sumire either, Su Ae looks a bit like Koyuki and I think she could have pulled it off. Especially if they plan to change to job description to a fashion editor or whatnot!

i cant see her as Sumire.. judging from the pic alone... i still like either Soo Ae or Kim Sun Ah but both are about to start shooting for Athena and I am Legend respectively... i haven't seen her work so I don't know about her acting ability but if most people say she's not that good in acting, i'm afraid that JGS might overshadow her.. that's too bad because Sumire should have a strong presence..

I'm still thrilled about this movie though, i love JGS too much =P

I love her!!!
She is the only actress that I allow to be pairing w/ Geun Suk XD
I am so in love w/ fantasy couple and You're beautiful!!!

It seems everyone in here like SuAe...
I think she is too old for Geun Suk. If you see her recent pictures, she looks at least 15 years older than him.

I hope she doesnt accept this role !

I love HYS and wish her a much better drama to play in. So I hope shw will wait for a better projct :)

Regarding her acting skills...she is a very good comedian. Thats a fact.

Her comedies Fantasy couple and Miss Gold Digger are the proof for this. She even got awards for those roles.
I also liked her in WISFC, although a lot of people ciritisized her. I didn't want to see anyone else as her as KS's love in this drama.

Wish her all the best :)

Right on target, JB, as always.
I love Han Ye Seul, but she wouldn't be my choice for Sumire. Although appearance-wise I could see Sumire in her, I don't think she could pull off Sumire's vulnerability. But yeah, better than HCY... :P

That said, I'm really looking forward to this even more than before. I've seen both of them together in Nonstop4, and I cannot wait to see how their chemistry is going to be as a couple.

hmmm....not bad, but i think lee yo won fits better for sumire's character
i already discuss it with my sister (she really love kimi wa petto) and we decided that LYW fit with sumire's character and i think her acting is not bad too

Just thinking about Jang Geun Seok in this movie is enough to get me all hyped up! I actually liked Han Ye Seul in Fantasy Couple. She can play snooty without being obnoxious and unlikeable.

well, i cant wait to see JGS for this movie. i actually watched kimi wa petto japanese version when i heard JGS will do it. really exciting because i love matsumoto jun and JGS does remind me of matsujun... anyway, is it only me who can see Kim Sun Ah as Sumire... she definitely got the physical part, she is beautiful and statuesque. and KSA can pull off the acting part to show the vulnerability of Sumire... i want to see KSA in a more serious role, where she is not the crazy one. she showed a lot of acting depth in Cityhall and she did win a daesang in Kim Sam Soon... i would love to see JGS and KSA in this movie.

I think she's not a bad actress, not excellent but she plays a sophisticated woman perfectly.

I'm not a fan of the couple though

Its a NN4 reunion! I actually like HYS as a personality but not exactly as an actress. She plays my favorite hong sister female character in Accidental Couple.

I'm very disappointed, i had high hopes for Soo Ae to play Sumire.

I could not agree more! In my mind, I was thinking of Sohn Yeh Jin. Too bad as JGS is a good actor.

Oh sukkie, kekekke
Honestly I was hoped Ha Ji Won would be the female lead..
since it's impossible

Oh My, she is one of the reason I stopped watching WISFC.. hahaha
but If so, I HOPE she will improve her acting skill.

The only drama I have watched of her is WISFC and she was MONOTONOUS!
JGS will eat her alive.

OHHH NOOOO, what a disappointing choice.......
She is one of the reason I stopped watching WISFC as well.....