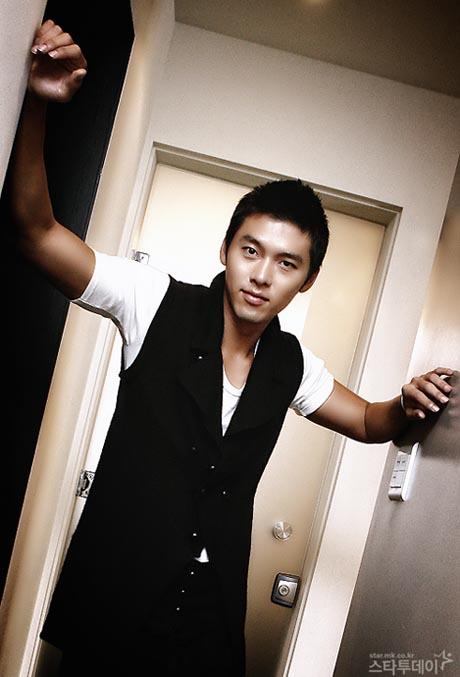 Hyun Bin is going back to work with director Kwak Kyung-taek, with whom he shot last year’s dark drama series Friend, Our Legend. (Kwak also filmed the original movie, Friend, which starred Jang Dong-gun and served as the basis for the drama adaptation.)

Hyun Bin will be the lead in the film Beautiful Us [아름다운 우리], joining Joo Jin-mo, who was cast earlier. (This film will also be Joo’s second time working with Kwak; his first project with him was 2007’s movie A Love.)

Beautiful Us is based on the real-life Second Battle of Yeonpyeong, when a North Korean patrol boat attacked a South Korean boat in 2002. A large-scale project, it boasts a production budget of 15 billion won and will be filmed in 3D. Filming will commence in mid-June.

Hyun Bin hasn’t necessarily been able to replicate the massive popularity he gained after 2005’s My Name Is Kim Sam-soon (follow-up dramas Snow Queen and The World They Live In had disappointing broadcasts, though the dramas themselves were well-made). However, he has been making some interesting choices in recent years and I think he’s positioning himself well for a jump to a more serious acting career with stuff like Friend, the remake of the classic film Late Autumn, and now another big-budget Kwak project.

Now THAT is a very nice pic to wake up to! Hello, beautiful...

I think Hyun Bin was so criminally under appreciated (by the industry) for his role in Friend, Our Legend. I think my psyche was permanently scarred by his Han Dong-soo. As great as he was in MNIKSS, he certainly seems to be leaning towards darker, more serious roles, which actually suit him better, I think.

Also, he's just impossible NOT to stare at. Who wouldn't want to cast him for that reason alone?

Hyun Bin and Ju Jin Mo in the same movie? That's heaven!!!
Was jumping up and down on the chair when I first saw the title. Hyun Bin and PD Kwak reunion. Oh..loved the drama. What can I say?

I luve JJM especially in Queen of Game; He was so HOT. But why is a war movie, I am not fan of anything about WAR. Can it be likes love-gangster drama similar to
Lovers drama instead.

I have to concur with our Madame President of ICOMYM....GOOD morning to me.The fact that the film is titled "Beautiful Us" is sooo appropriate,with our Mr. Dimple in it ;)Thanks JB, you always have goodies for us first thing of the day.

On a serious note: While I wasn't too crazy about TWTWLI,and not "ready" for Friends,I appreciate the facts that Binnie is "growing" as an actor. I think that he understands that his good looks/dimples cannnot last forever(why not?? hehe),and he betters himself into deeper roles/characters. I applaud him for that...can't wait for this new project ;)

i haven't watched friend yet but i agree with cingdoc, i think it's awesome that he's challenging himself as an actor. he's gorgeous no doubt, he could quite easily have been even a very good actor in mainstream roles.. i really like that he decided to take his career in another direction.

After watching Ireland, I've come to the realization that it was MNIKSS that was the aberration, and that the gorgeous and talented Binnie is and always was a reluctant idol, i.e. a Russell Crowe stuck in a Brad Pitt body. I may not always be interested in his projects, for subject matter and mood, but I'm thoroughly awed by his range and depth.

One of my Original Loves =)

I've been reading about this for a while in the Chinese forums.. I dont really know what to feel or think about this career choice of his.

A lot of his hardcore fans (mainly Chinese and Korean) r FURIOUS w/ this decision of his and I can understand it to a certain extent. haha now I wonder what I should categorize myself because I don't feel that extreme a reaction to this, but yet I know where they r coming fr.

Yes, Friend, our Legend is criminally under appreciated by the industry, but it's almost like all of Korea want HB to stay a matinee idol and he's been rebelling against it and fed his own medicine. His movie I'm Happy was done before he started production of Friend, I cant even find a bounce of noise or clip on that final product for... o a year now?!

What is confusing me is w/ his repeated extravaganza of fanmeets w/ the J obasans. binnieboy, if u r so going against everyone's wish to do anything mainstream that will lock in comfortable ratings...y this 'whoring'?!?!?! (it's not exactly a complaint, just I'm not computing)

and the main grip of his hardcore fans is... he's a string of bombs w/o really establishing a substantial A-lister status draw-wise other than the J market. And we can try not talking about business, but the fans r very very worried of this big budget movie bombing, and frankly odds r not on binnie's side...his upcoming MS...who's going to gamble dough on him after his series of bombs?! cant he be more aggressive?! (again I'm just reiterating bits of a massive outrage of his fans)

I'm not sure, I'm liking his choices tremendously actually and I'm less inclined on mainstream fare anyways, he's never disappointed me in anything he's done (MFL aside) and I'll happily watch a war movie (so not my thing)for him. Is this a wise choice in the business end of things, maybe not...but I personally can care less.

I don't know... He just doesn't get me excited.

While I like Hyun Bin, I absolutely LOVE Joo Jin Mo. I'll be watching this movie for sure =]

This? Is me flailing like a flaily thing. JJM *and* Binnie in the same movie? My brain, it can't handle the info. Excuse me while I recover higher brain functions...brb

first reaction --> i will watch this movie just for the hotties!
second reaction --> what's up with these 3D movies?

while i appreciate some movies as 3D...serious movies and war movies shouldnt really move to 3D. really, 3D in my opinion isnt all that great and i feel movies are for the most part best left off "2D."

Joo jinmo casted with his Buddy? cool..
I feel bad with Popularity Labeled.
i think just rare Actor in Korea who can bring Handsome, Popular and "Actor" label.
In my Opinion, HB's skill should be sharpened and he is Still Handsome and Popular ( even i am his fan , i truly feel this ).
HB bit picky choosing his projects.

I don't know, i like the way Japanese, Taiwan and HK's Stars Work
how Popular they are, they always have a project at least 2 or 3 per year.
Most Korean Popular star is really rare or Picky , could someone tell me why?, no surprise if their acting ability still stuck.

@16
Hyun Bin And Joo Jin Mo up close and in 3D!!! What is there to question about?! I hope they will screen this movie in LA or I'll probably have to buy me a 3DTV just to watch the dvd (imagine having HB and JJM at home with me forever), If they offer the dvd in 3D format, I don't recommend buying it because I purchased the Coraline dvd in 3D format and it is just blurry as hell and makes your eyes hurt.

I just hope neither of them dies - won't be much fun watching them die in front of me.

What's up with the way he choose his project?? I like the world they live in (In fact I wonder why not many people like it?? and its low rating?? hee...). And I think his acting in Friends, Our legend shows how much grown up he's already become (try to compare with he's in Ireland ho, ho, ho).
Yeah, there's no wrong being popular, handsome, and good actor in the same time. Just love Binni Oppa. Semangat!!!

Give the casting director a BAFTA, a Palm d'Or, a Golden Lion, an Oscar, a Nobel prize even. Binnie and JJM in the same film, thank you fairy god-mother (Santa, etc.)!

He seems like he wants to be more of a film actor?