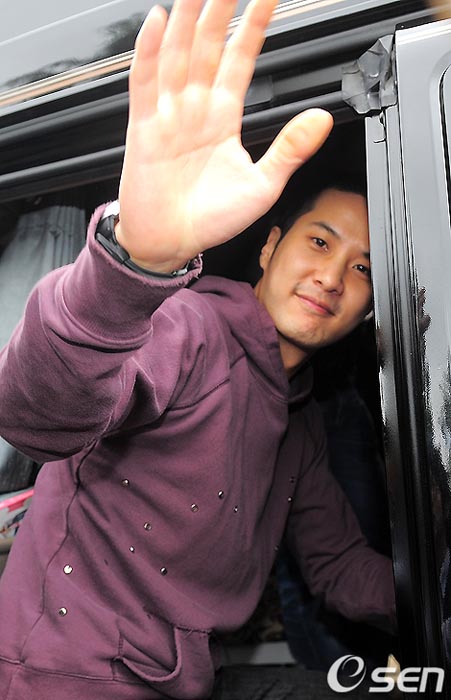 As announced last month, Kim Ji-suk began his life in the army with his May 24 enlistment, just four days after wrapping up his last project, drama series Personal Taste.

He was sent off by members of the press and a small crowd of fans. Asked whether he plans to apply for the entertainers’ unit following basic training, he answered that he’s not thinking of it at this time. For now, he will train for five weeks and then serve 22 months in active duty. His discharge is planned for March 7, 2012.

I hadn’t really cared much for Kim Ji-suk until this year, when he took on roles in Chuno and then Personal Taste, the latter of which really endeared me to him. It’s too bad that most actors end up leaving just as they’re hitting their peak, but the sooner they go, the sooner they’re back, right?

The day before, Kim Ji-suk uploaded the photos below onto his mini-homepage, showing his newly shorn hair. (Personally, I think he wears it quite well, which isn’t always the case for actors. He actually reminds me of Jo Hyun-jae in these pictures.) aww he's so cute! i'll definitely miss him on the kdrama scene!

see you in 2 years!! I hope more stars come back from the military... who else are coming back soon?

nooooooo. ill misss youuu...
omg but why so long...aish

I find him better looking having this new hair do!! LOVE ♥

hahaa...agree! not all celebrity look good in this hair style, but kim ji suk still looks cute as he always does...:)

I'm going to miss him. After watching his recent work, he left me with an impression. I'll certainly be excited when he comes back.

I'm one of the rare one here that have yet to watch Chuno, so the KJS that's familiar to me would be the Oppa of YEH's Vineyard Man(he was kind of jerky,there) , the loveable guy in Likeable or not and of course the most endearing "bad guy" turned out honest/grown up CR in Personal Taste.
I have to say that KJS's acting skill has improved over the years, and I'm sure that he will continue to give his fan a good performance when he returns from the mandatory MS. Good luck to him...

he looks great in the pics ~ can't wait to see him back on the screen!

yeah i really liked him in personal taste actually lol! was semi-rooting for him

13 grace, the one from Jersey, USA

I thought that he was very likable in "Likable or Not" :)
( still waiting for those delicious Bon Jour seafood dumplings )
and I think he did a great job of playing the sometimes-likable
Chang-ryul in "Personal Taste."

Wishing him the best of luck with his military career,
and with his future acting career. ~ STAY SAFE ~

HE LOOKS VERY MUCH NEAT! AND SO MUCH YOUNGER! Why does he have to leave when he's become this cute!

Good luck for Kim Ji-suk, hope after serving time for military, we can see him in good dramas and movies. See you soon Kim ji-suk!

It's funny how they always make the actors going to the army do the salute.

We will miss him.. Personally, I hated at the same time liked him on his portrayal as Han Chang Ryul in PT. :)

Watch me say no in slow motion...

Awww...if he looks like that in PT i'd be confused if i'd still root for Min-Ho lol.
He looks so cute with that neat clean cut.

he looks a lot better in the shaved head than lee junki does, LOL

Wow, I didn't like what he looked like in Personal Taste, but after seeing him with his hair shaved, I see him in a whole new light. He's pretty hot! I'm kinda sad that I didn't catch onto this earlier.

It feels like so many of the actors that I enjoyed watching in dramas are now doing their military service. Well, I guess new actors will be springing up in the meantime! Two years goes by pretty fast... I think... right?? =/

He is looking great!! Will definitely miss him!!

Must say, KJS looks hot with his new hair.

I saw this guide to kpop in the Harper's magazine. It's for people who want to impress the Korean girls by knowing kpop - http://www.thenervousbreakdown.com/dswills/2010/05/a-beginners-guide-to-k-pop/

aw, cute cheeks! will look forward to him returning (others on the list: kim rae won and jae hee!)

errm WHOA. HOT. <3
how come i didn't see this hotness before? him without hair makes all the smarminess diasappear and it just leaves the cuteness. yay!

2 yeaaarsss argh, oh well. i survived gong yoo and chun jung myun and won bin, i'll be able to survive this. AND lee dong wook, AND jo in sung.........
*brb, shaking and crying all over again*

aw.... i liked him since his x-man and love letter days... and he made me actually come to like Chang ryul, which i totally did not expect. and i have to say, he is really attractive with this new do so kuddos to him!
I will miss him and wait for his return!

I will miss him love him in Chuno and in Personal Taste.

He looks great with his hairstyle...totally oozing of manliness

Woah the hair was just a distraction, he looks realy cute without it and I like his casual wear.

i agree! he looks so cute with his new do! good luck!

the look doesnt remind me of jo hyun jae but her looks good with the new hair..and much better now that he shaved! :) i actually never thought of him as a good-looking guy...until today :)

wahh wahh wahh
now i'm really saddddd
i loved his hair in personal taste but this hair looks really good too
a good looking guy can pull any hairstyle off!
i'll really miss him a lot.
he's my favorite besides Kang Ji Hwan so meanwhile i'll stay entertained with coffee house.
ji suk oppa i'll miss you!!!! see you in 2012!

can't see the similarities u mentioned with Jo Hyun-jae ^_^ I even looked back to ur previous post (http://www.dramabeans.com/2008/08/and-another-one-bites-the-army-dust/). Anyway, Hyun Jae will be released middle of next month right? Can't wait!!!!! Please please please do a write up on that event

i really look up to the military service that Korea MAKES the men do... i mean its just fitting to give at least 2 years for your country.. Most countries should do it too so those lazy men can get their butt off and work..

Anywho... PT was the first drama i saw him on and he did the role very well! We will definitely miss him, but just like in the case of Chun Jung Myung, i hope he chooses great projects when he comes back and get his career on top again =)..

I'll wait for his return pics here in Dramabeans in 2yrs ;)

Does that mean Lee Min Ho will have to serve in the military as well? Its my first time to see KJS in a kdrama (personal Taste) Its too bad that it will take a while before he stars in another one. Good Luck KJS!

I will miss him. He was adorable in Likable or Not, and even more endearing in Personal Taste. I just love it when he plays a Pinocchio type of guy.

He looks so handsome with short hair. But why the purple hoodie? It's so .....not sexy!

good luck to him!

He is so cute. I don't see why he would be nervous of Lee Min Ho's handsomeness. He's a cutie too. He looks pretty good shaved. :P

This tavern lady will be waiting for Wangsun to come back in 2012.

Anyone notice a few scenes on PT where he actually spits his words out? I thought those moments were funny. His words surely stick on people.... keke... I already miss him in some way. ^ , ^

i'm going to miss this guy. i fell in love with him after watching "i hate you but it's fine". he's adorable and a good actor so it's going to be sad not seeing on tv. i hope he fulfills his duty well and come backs as a stronger man & actor.

He looks great with that hair! I just want to touch it.