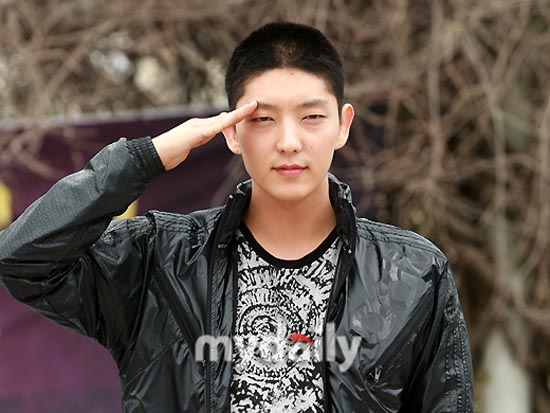 Well, the time has come, and Lee Jun-ki (Hero, Time Between Dog and Wolf) is off to fulfill his mandatory two-year military service. He headed off to the Nonsan training center on the afternoon of May 3, where he will undergo basic training for five weeks and then move on to twenty months of active duty.

Lee expressed his thanks to his supporters, and was sent off by a large crowd of 500 fans (which is pretty large for this sort of event; other actor send-offs tend to number around 100 or 200).

Lee had received his enlistment papers on April 12, and had applied for a deferral in order to fulfill his commitments to the movie Grand Prix and the drama Faith, both of which he had agreed to do. However, he was not granted the extension and the final decision came on April 28. Grand Prix, which has already begun filming, now needs to find a swift replacement, while Faith has a bit more time to re-cast.

His hair looks like a hat ! LOL See ya in two years ! Good luck !

It's the HORROR HAIR again.

Every time, somebody goes to military, I have to double-checked the picture.

what a cutie :D
wowowowow look at all those people with cameras!

he must have so much hair because even with the buzz cut he looks like he still has a snug helmet of hair on...

it annoys me greatly that he's so pretty. i hope he bulks up in the military, he's way too skinny. all those fans who sent him off must be in mourning, military service widows. awwww.

Do they allow kids in the army now? He hardly look like himself with all his hair chopped off. Goodbye for now Lee Jun-ki.

And to think, he's going to the army now because he's pushing the limit for being OLD for service!

omg i think he should try a shorter cut even when he comes back eventually. he doesn't look as greasy.

He looks ADORABLE. Totally in an I-want-to-pinch-your-cheeks kind of way. I think I like him better with short hair, and I would never have thought that would be the case. Just like Chun Jung-myung, he'll probably emerge from MS leaner, meaner, and cute as ever.

Wishing him the best of luck!

I almost didn't recognize him because of his new 'do. LOL!

Seriously, call me vain, but the first thing I look at when it comes to a guy is his hair. My friend and I argued once that he looked like a girl (my friend, not me). I thought he didn't. But the irony is, now without the hair... GEEZ, he looks like a GIRL! I guess his hair hid enough of his feminine bone-structure and made his eyes seem a little less feminine.... Two years from now, I'm going to wait a whole load of months after his discharge to give his hair time to grow back... Otherwise he will look like a twelve year-old (according to jb) GIRL (according to me).

this is sad...why do so many go off to the army so young...
(why must they always cut their hair)

The hair made him glamorous, now he looks like my kid brother and he's 4 years older than me O.O And lordy look at all those media people and fans, at least he got a big send off on such a short notice. I'm going to miss him so bad :(

I guess this is the day I become a military wife waiting faithfully for my husband Jun Ki? :D

/doesn't know whether to laugh or cry

another cutie off to military service.. =( I'm looking forward to his team up with KTH.. so sad he wasn't able to finish it... oh well, 1 more year to go and my uber favorite Jo In Sung will finally be released! when it's time for 87ers... it will surely be lonely, Lee Min Ho and Jang Geun Suk will probably go in the same year..

So the 2 male lead stars of My girl as in MS together. Hope they star in a drama together on their return to civilian world.

All the best to him!

Ah so sad! I love Jun Ki. Two years will feel such a long time!
Hope everything goes well for him, and comes back safe and unharmed.
Bye for now Jun Ki, see you soon!

such a sad news for me, i'm his fans since 2005 and always prepare myself for his enlistment but this case is soooo shocking. Ans his last cy world message made all his fans cried. even he said if fans are too tired of missing him, he will let go of us for a while....let us love other stars... my mind was blank and think that it's not true.. til today, we forcely accept it and wish he fulfill his duty safely.. hurry back to act in great drama/movie again junki !!!

you still look good with that haircut. dont be shy hahaha... we love it ^ ^

He looks so young! Good luck to him and looking forward to his return.

Well, let's hope he doesn't do an army drama, he really does look young with the shaved head. Not a huge Jun-ki fan, but he will be missed.

I had to cry first before I had the energy to read this post and comment. Junki looks like he's ready to serve and I wish him a great experience. I'll console myself for now with my other 12 drama lovers. :-)

Seriously, I'm really gonna miss the socks off him.

oh no , i was hoping i dreamed this . MS just doesn't suit jun ki . but still can't avoid this things . next thing we know they'll be sending kim bum to the army . lordy !!

awww! he looks sooo young! good luck lee junki!!! I was seriously hoping to see him here in shanghai for the world expo but... oh well see you in 2 years then!

please come back soon and bring back your hair....omg 2 years...that's going to be torture

Wow, he actually looks good with the buzz cut. But like you said...DAYUM...he looks YOUNG!

poor guy the dark circles under his eyes are huge...(as far as I know I never seen him with bags under eyes)
the next victim will be Kim Nam Gil :( he's an 81'er

I'll miss him... The hair just killed me.

I discovered him in the King and the Clown : so gorgeous and yet a very sobber acting... Just graceful.
And now I'm watching his work in his last drama Hero which was quite a (nice) surprise. For some reason his character made me think about Dae-poong in My Too perfect sons...

Thank you for making us has such a lively time.
You make us shared to each other,
You make us care for each other,
When we know you, whom we love forever, will be so far away.
We all hurt together,
But we gain more than ever,
That is we know how to love in a stronger way than ever before.

Bye bye Lee Jun Ki...see you in 2 years...nowadays...2 years is not that long. Days passes by so quickly that I am thinking..it is May already..in a few months..it will be Christmas..lol

I will miss LJK...fallen in love with him during My Girl days..

*sigh!! now year of loneliness all my beloved Hotties are in army now

haha.. twelve yr old look. i think that's good for him. aside from being a celebrity, looking young will give him special treatments in the army. hehe.. although i have observed that after mandatory service, they all look old. so savor that look ladies.

It's verry funny! Do you think that millitary service is prison or something like that!
Not long agoq it was the same in my country too. And it's somekind a fut and fear for the men and there relatives. Even me have passed 2 weeks military training wenn was 17 years old. It's not a big deal! War is the oldest man's proffesion after all. Don't wou think he and his familly didn't tray to avoid this situationq but obviously it's not possible. Don't make situation harder!
Just let's prey everything to pass well,without incidents. As we say here, whatever has been writen in the book of fate!

Jun-ki, I am sooooo going to miss you T.T

He should be in school.

He looks ordinary with this hairstyle :) His previous h-styles fit him. Anyway, I love him!
Good bye, Jun Ki oppa!!!
I'll miss u!!!

All the best with your army service

He looks so cute even with short hair , I feel like crying T____T
come back to us soon please we Joon Gi fans will be waiting for you ..

I wonder how and when the decision makers come to grant an extension or not. When I read these reports of an actor being enlisted, it often seems as if he was not expecting it. Doesn't the military give enough notice so that an actor knows if he will be available to finish a project?

He does look twelve! But I rather like him with the short hair.

he looks so young
wow!!!
come back safely oppa
looks liked re-runs of his dramas is going to be my only chance of seeing him