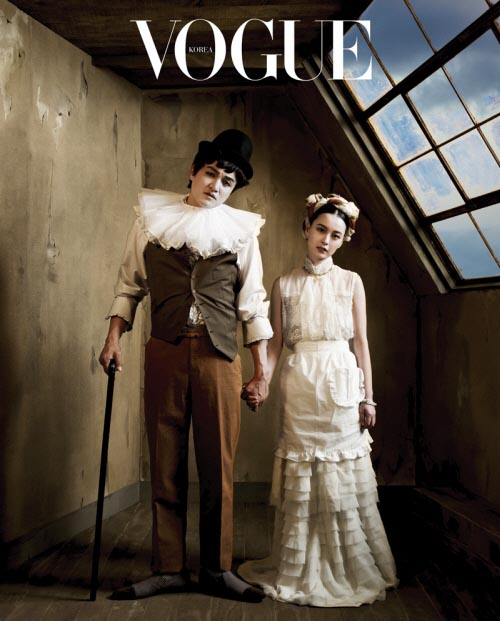 I posted the preview and stills for the new romantic-comedy film My Gangster Boyfriend, and now here are a few more photographs of the odd couple, played by Que Sera Sera‘s Jung Yumi and Haeundae‘s Park Joong-hoon. The first set of photos are from Vogue Korea and were shot using the concept of “The Clown and Maid’s Story.” The second set are additional posters (the “B cut”) released after the movie’s May 20 premiere.

In the movie, he’s a gangster while she’s newly unemployed and looking for a new job; their unlikely romance develops as they keep running into each other when she becomes his new neighbor.

My Gangster Boyfriend has been out a week now and its performance has been solid, benefiting from strong word of mouth. It drew in about 220,000 viewers in its opening weekend, and is estimated to hit 300,000 for its initial week.

The first pics are really beautiful. They remind me of the 1943 movie "Children of Paradise".

hmmm...I'm looking forward for this movie..seems funny and interesting..

The Vogue Korea photos are just wonderful, I'd love to have them hanging in my house! This looks like a very entertaining movie. Thanks JB! :-)

That doesn't even look like Jung Yumi but I love the pictures and her.

i have to say that they look good considering the concept of the photoshoot.
and thanks for the post!

I think the first picture is weird n creepy, but the others are fine...maybe I don't understand art too much :p

the first picture looks creepy..but that's what makes the photo look so interesting. i was just drawn to it. really nice photo!

After looking at the other pictures at the bottom the first thought that came to mind was, "Wow, Jung Yumi is actually really pretty!" I don't know if it was her hair or her character in Que Sera Sera, but she never really struck me as being really pretty, cute yes but not particularly beautiful.

Jung Yumi looks so different in all of these pics from her QSS days. But, even in QSS she looked beautiful when she was all dressed up "sexy" at the fashion event where she kisses Hyerin's oppa (his name escapes me) in front of everybody.

This is a bit off-topic, but I just rewatched QSS after 3 years and boy, is it ever good, even the second time around. javabeans, your recaps for QSS really set the bar high; they were absolutely fantastic and the many comments people posted were very thoughtful and made watching that drama that much better. I've been following your blog for more than 3 years, and I've enjoyed every moment of it. It's astounding how you maintain such a quality blog. I thank you for all of your efforts!

not at all intrested in the film
but

those are INCREDIBLE shots for vogue

I've watched the trailer and it seems so enjoyable. I like that kind of movies. and the convos seem to be so funny and cute. in my to-watch list sure

Ditto everything you said! Jung Yumi is a quiet beauty in her own way. And QSS - who can ever forget that drama! Lastly, what a wonderful kheaven this blog is for all of us drama fans - thanks, JB!

okie, I'm going to repeat everyone again but yes Jung Yumi looks so different from her QSS days (must be the make-up for the photoshoot) but scrolling down to the last photo, that beautiful smile of her is no mistake.

The sudden mention of QSS makes me wanta rewatch it for the........ god knows how many times. :-D

I like the concept of the first photo, it reminds me of Tim Burton movies which are almost always eerie, quirky and weird.

I absolutely love that first picture! can't wait to see this one